A summer blown away

They’ve been picking glass splinters out of cushions. Or trying to, in any case.

The Once New Librarian noticed the oddly parked bike outside her block of flats on her way to work one morning in June. The bike with a parcel carrier at the front, with a bomb on it. Except she didn’t know it was a bomb at that point.

It was the day after my birthday, and many people would have had the day off. Luckily, Once New Librarian didn’t, nor did her husband Motala Boy. And Motala Boy’s colleague and his family were away on holiday, or they would have been having breakfast on the balcony. The balcony that is no longer there.

Because when that bomb exploded, the block of flats was severely damaged, but mercifully with no fatalities. Not even too many serious injuries. A bit like the Manchester IRA bomb, really. (Which didn’t then mean that there wasn’t rebuilding taking place for a very long time.) As there will be in Linköping.

This summer was only the beginning. Once New Librarian and Motala Boy have not been back to their home. Not allowed. They had what they stood up in plus a small work rucksack each. And after rescue services had gone in, they also had their two cats. Mercifully not covered in glass splinters, unlike the cushions.

And the old dresser. And many other items, with which they were only reunited last week, three months after the bomb. They have now been spending over a week deciding what to get rid of, because the glass simply can’t be removed. 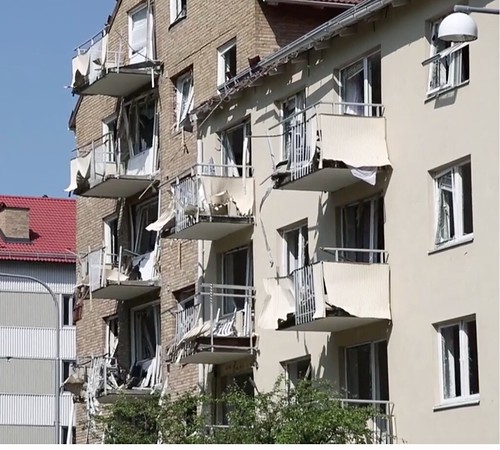 It wasn’t just the loss of their home and having to camp out with family. There were hours and hours of talking to insurance companies and the authorities and being interviewed by the police. They had less holiday than planned, because of this. Less of a summer, really. A week after the bomb they attended a friend’s wedding, wearing borrowed clothes. They didn’t have access to their car for most of this period.

But this being Sweden, three months on, they have been provided with a lovely new house to live in while the flats are rebuilt and made safe.

And the cats are all right.

This entry was posted in Blogs and tagged Librarian. Bookmark the permalink.