That’s Manchester’s finest, plus a contribution from Lanarkshire. Marnie Riches and Mandasue Heller come from Manchester’s troubled north and troubled south respectively, and I have realised I was right to be scared of Marnie when I first met her. Anna Smith – with no exotic name – came more from poverty than the violence the other two were used to. 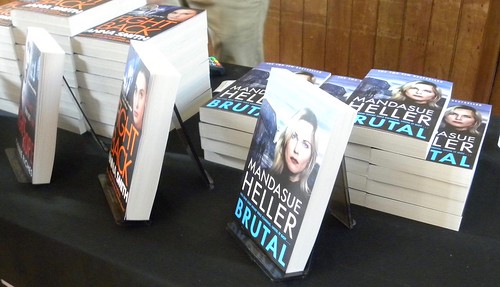 Gently guided through the finer details of gangs by Jacky Collins – no not that Jacky Collins – we spent an hour learning about the seedier side of life. Mandasue came to writing after a life as a singer, after having been attacked in her flat, along with her ten-week-old baby, and feeling fed up with the bad treatment she got from the police afterwards.

Marnie was so bored at work that she decided to write some children’s books, before realising that her language is ‘too foulmouthed and dirty’ for children, and she reckoned that what dead Stieg Larsson could do, alive Marnie Riches could do as well. And she has, with her George McKenzie books followed by her Manchester ones and now more crime on her home ground in and near Hale – ‘where the orange people roam’ – with Tightrope.

It was Anna’s publisher who suggested she try gangland crime, and having read one Martina Cole novel, she decided to have a go. Her character can be described as a ‘much more exciting me.’

An expert on Nordic Noir, Jacky found the books by these three women an eye-opener. They were really dirty and draining; ‘so raw.’ 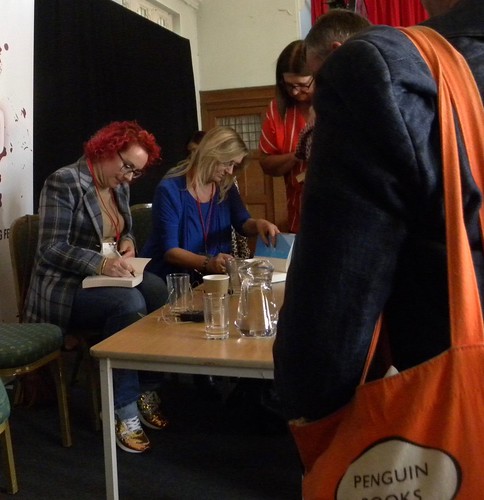 Referring to Mandasue as the gangland queen, Marnie described her own childhood and how she ended up as the angry teenager from the council estate when she made it to the posh school, and from there to Cambridge. I learned more about her mother, too, and she sounds like quite a woman.

Mandasue started life in Warrington, before moving to Manchester at twenty, and she loves it! Anna knows about the poverty in Glasgow through her work. 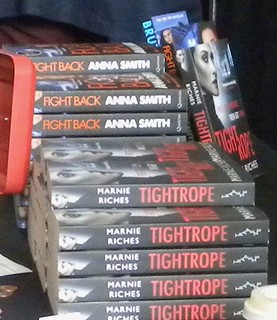 The way to write about bad characters who do really awful things, is to use humour. In fact, many of the bad people they have met are quite amusing. Sometimes the women are worse than the men. Marnie mentioned two girls everyone was scared of where she used to live.

The first question from the audience was how they felt about women being murdered [in books] and the short answer seems to be that since this really happens, it’s very real. Marnie has also murdered many men (fictionally) and while Anna likes men, she makes bad things happen to them.

Another question was if it’s possible to write about bad men with no redeeming features, and make it work. Admitting to being someone who used to have a massive crush on Darth Vader, Marnie said she writes about serial killers, and that she feels the continuity with their back story is important. She’s afraid someone will ‘recognise’ themselves in her books, and then she told the story of her builders, their criminal past and what you might do with a wood chipper.

Mandasue never writes about real people, but they do come up to her and ask if that was them. One criminal came to an event and said he liked her book, and how realistic it was. As did the undercover cops who used to work where she lived. She said her move away from the city in her latest book, Brutal, was not intentional; she just wrote what was in her thoughts.

She’s been a bit of a serial starter of books, and she described how her changing one line in the prologue, meant that the whole [of her next] book changed. Urged on by her agent, Marnie said she was supposed to mention that the Kindle version of Tightrope is available for 99p. And the next book is Backlash, out in January. 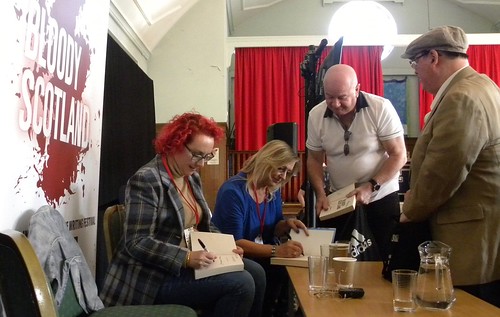 Unlike last year when Jacky overran, it seems to have helped that she had no watch today, and we started and ended just when we were meant to. This was definitely worth missing the sunshine for.