She even has a temporary flamingo. That’s Daughter, with the flamingo. And it’s only temporary because it’s not hers and it’s going to stay in the temporary place when she moves on. Otherwise I’d like to think it’s very much a permanent flamingo. If only for its sake.

I’m mentioning the flamingo because there were several of them in her last place as well. One wonders if she attracts them. 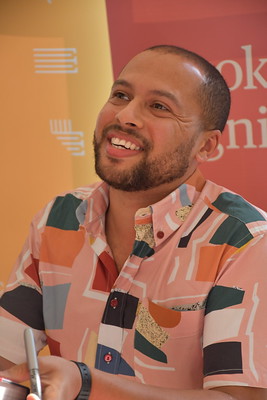 Whereas the flamingo that brought this on is black, as in the book title The Black Flamingo. By Dean Atta. You might recall Daughter and I went to hear him talk at the Edinburgh book festival in August, and she ‘just had to’ have the book.

I mentioned taking Philip Pullman’s Book of Dust instead of drugs, last week. Well, Daughter did too. Her own copy, I might add. When life is stressful, it really does help.

But then she went and finished the book. And in temporary places, even those with flamingoes, there are not so many books to choose from when you want to read. But I urged her to pick one of her other two (!) works of fiction, for her continued drug-taking.

Once she’d started she couldn’t stop, and it ended with her sheepishly calling me to say that she had, erm, read the whole flamingo.

So that leaves one book. Plus the Kindle, which apparently has now been fed, so it can dispense fiction, hopefully on demand. Because what’s the point of me having forced her to buy ebooks if the Kindle is hungry?