Even at the best of times I find Chris Priestley really scary. I mean, his writing. Sometimes I don’t read a book of his because I’m not feeling brave enough. Other times I save it until there are people nearby. Just in case. 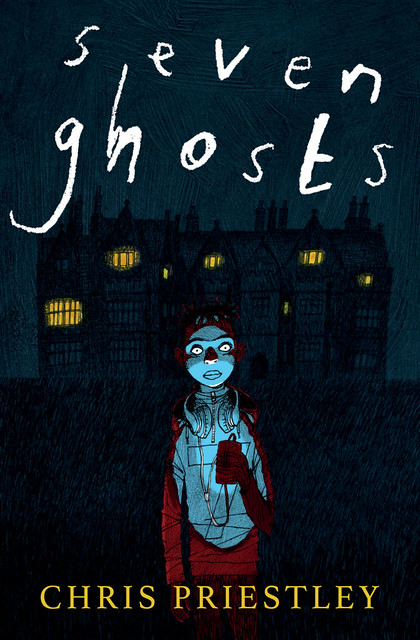 For Halloween I don’t want to deny anyone the thrill, not to mention the trembling knees, of reading Chris’s latest offering for Barrington Stoke. You really don’t need to go out in the cold and dark and beg for sweets from strangers. Much better to tuck into Seven Ghosts and hope you will escape unscathed when you’re done.

It’s about a story-writing competition. Jake and a group of other children who have been shortlisted are being guided round the local stately house, to hear about, and maybe meet, the resident ghosts. Just for inspiration, you under-stand, so they can go away and write an even scarier story.

Jake seems to be the only one to feel uneasy, and the only one who can see certain things. Their guide feels a bit fishy, doesn’t she?

The dressed-up, fake ghosts strike Jake as rather feeble. But what about that cracked mirror?

Let’s just say that I was wise to wait until I wasn’t alone, and that bedtime would not have been an appropriate time to read Seven Ghosts.