Buying a book for my sister

About to visit my eldest [half]-sister for the first time; and the second time we’d meet, I felt I needed to turn up bearing a gift. But what?

I ‘always’ give books. But I knew she’d left school early, so didn’t expect a children’s book in English to be any good. But after some more thinking I came up with Adèle Geras’s first adult novel – Facing the Light – which I knew had been translated into Swedish.

In the end I managed to source what appeared to be the last copy on earth of Ljus och skugga, from an online shop in Sweden. I had it sent to me in England. After that I contacted Adèle asking if she would sign it, and she very kindly invited me round to her house and we had a nice chat, mainly about wearing green, chocolate from Oxfam, and swimming in the sea, which caused a very cold May/June and no swimming in the sea. And she signed the book.

After which I carried the novel back to Sweden so I could hand it over.

Daughter and I had a lovely day with our new sister/aunt and it was gratifying to see how pleased she seemed to be given a personally signed book. 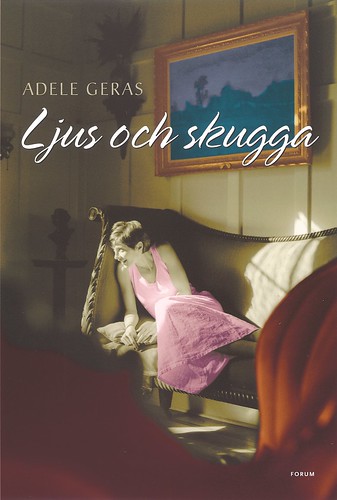 We met a few more times after that, and I’m glad we did. Acquiring an older sister in one’s forties is perhaps slightly unusual, but why not? And we discovered we had a connection through School Friend, whose older brother was at school with my sister. Sweden really is a small world.

My sister died a few weeks ago. I’m grateful to have known her. And kind of pleased that they played Elvis at the funeral.

2 responses to “Buying a book for my sister”