The Book of Dust – The Secret Commonwealth

I hope I will be forgiven for having had one major thought in my head when reading the second Book of Dust by Philip Pullman. Yes, I obviously wanted to see where the story was going, and what the adult Lyra was like, having found her fascinating in Lyra’s Oxford. Also what we’d see of Malcolm, and maybe Alice, from La Belle Sauvage.

But uppermost in my mind was to wonder how Philip would portray Nur Huda el-Wahabi, whose name so many of us hoped to see win the auction to have their name in this book. It was such a beautiful working together, with very little fighting to win. I know Philip warned that there was no guarantee for what kind of person he’d give the winner’s name to, but I felt he’d do Nur proud. He did. It took most of the nearly 700 pages before we got to her, but she was as perfect as you’d have wanted.

Thank you, Philip. And I also enjoyed the two other ‘real’ people, Bud and Alison. 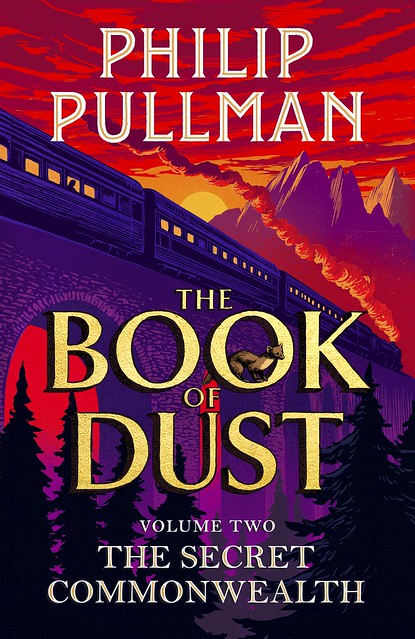 And you know, the rest of the book’s not bad either.

Were it not for its sheer physical size, I’d have said reading it was the perfect relaxation. Well, it was, really.

I’d been expecting more of the seemingly cosy Oxford we’ve been in before, but whether Philip had always intended it like this, or he has been ‘inspired’ by our own current society, I don’t know. But there is much threat in Oxford, both subtle and quite open and violent. And Lyra and Pantalaimon are not getting on. This is very disturbing, and you just want to knock their heads together and make them see sense. Pan is the more mature of them, actually.

So the powers that be – and we can’t be entirely certain who they really are – are chipping away at everything and everyone. This makes the move from Oxford into Europe more welcome, because you can see this must happen. The Oakley Street organisation is still a bit reassuring, but for how long? And Malcolm as a secret agent is a little surprising, perhaps. I know he started twenty years ago, but… Maybe I’m prejudiced.

Well, I’m not going to list what happens, nor how it ends. It’s a very enjoyable read, and I hope Philip is much further along with the third book than he has let on. This ending was almost a cliffhanger of a cliffhanger.