Invisible in a Bright Light

I could have wept with happiness reading Sally Gardner’s new book for younger readers, Invisible in a Bright Light. I found myself removed from adulthood and now, straight back to my Hans Christian Andersen days. 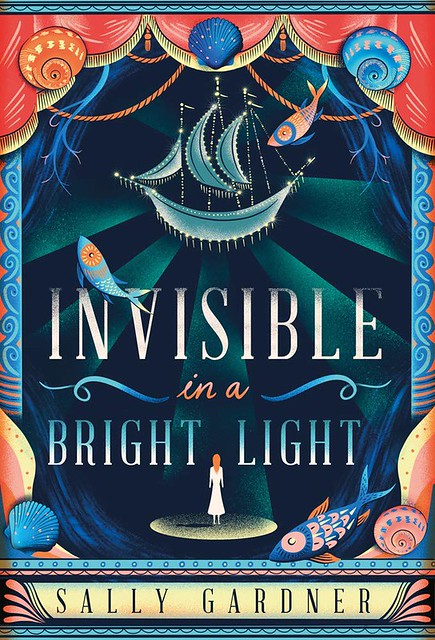 The fact that Sally has set her story in ‘the city of C-‘ some time in the 1800s helps with the belief that you’re in Copenhagen, which I think you are. It’s where Sally discovered the fantastic chandelier that stars in this story, and it’s where Celeste and her sister Maria would like to be, only to find themselves in the city of C- instead.

As in all the best fairy tales there is confusion and displacement and an urgent need for things to be put right. Celeste, and Maria before her, is unsure where she is and what’s happened. She/they only know that life seems wrong, somewhat dreamlike, and hidden, as if there’s something they can almost touch.

But what is it? And why do some people think Celeste is crazy?

Set in a theatre in a magical city, shortly before Christmas, we meet a host of interesting characters. Some of them Celeste feels she’s known before, somewhere else. Maybe. There’s something she can’t quite put her finger on.

Drama, intrigue, an evil witch, some very talented children, a good King and a sad clown and many others fill Sally’s tale. What’s more, if this is indeed Copenhagen, she writes about it as it might have been, and not as an English town. Places are different, and authors need to show the reader this.

The whole book is so magical! Or did I already say?

Read Invisible in a Bright Light and let yourself be transported back to childhood. Give your children what you had when you were little. In fact, with Christmas so close, this is the book that can be – needs to be – given to everyone, no matter what age.

Magic with snow. And the clock is ticking.

One response to “Invisible in a Bright Light”