I first met Tom Palmer eight years ago, at Media City in Salford, where he arranged games of rugby in his book event for the Manchester Literature Festival. I have to admit I only went because it was one of fairly few children’s books events on offer. But I thoroughly enjoyed myself, even if I didn’t join in with the ball playing. (It was on the fifth floor..!) 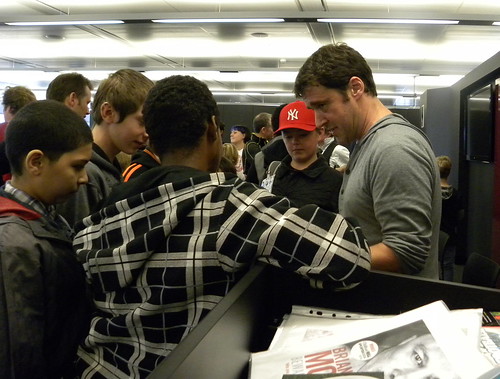 A year later he was back, and so was I. This time it was football in Manchester Town Hall.

You won’t be surprised to learn that Tom writes sporty books featuring both team sports and running. Things he likes. Things that many boys like, and because of that they read his books. This is the man who didn’t read as a boy, unless maybe it had to do with sport. Tom knows what it is not to read.

Many of us well meaning book experts don’t actually understand enough about this. Which is why I’m so terribly pleased, and not in the least surprised, that Tom has been awarded the Ruth Rendell Award for his outstanding contribution to raising literacy levels in the UK. I didn’t know there was such an award, and it couldn’t have been given to anyone more deserving.

I haven’t read quite all Tom’s books, but I have read more than my share of these energetic tales, and they are all extremely good. I intend to keep reading them, and to keep telling others to do the same.

Last week when the Resident IT Consultant and I discussed abridged and adapted classics for children, and I listed examples of books that the little Bookwitch had enjoyed, he said ‘but they all sound like books for girls.’ And he was right. I pointed out that what we need for boys are books like Tom’s.

The next day I learned of his award. Very well deserved!