Marie Fredriksson has died. I know that has very little to do with books, but it affects me. Part of her past happened in the place where I lived with Mother-of-witch. I had long moved away when Roxette burst onto the music scene, so I came late to that wonderful voice of hers.

The odd thing was that last week when countless Roxette tracks made their way into my iTunes shuffle I stopped and thought again what a great voice she had.

When Offspring were small we spent part of what was still term time in England going to the playgroup near my old home, because we had weeks and weeks and needed something to do. “The other mothers had cause to gossip about rich foreigners with houses nearby, and people too grand to behave like normal people. ‘But at least Marie Fredriksson always says hello’, was the verdict. She lived near at the time, in the house Mother-of-witch desperately fancied living in. Perhaps if she’d been a rockstar?”*

So, basically, Marie behaved as though she was a normal person.

I recall when she was diagnosed with the brain tumour. I had just arrived in Sweden to sit with Favourite Aunt as she lay dying, and saw the tabloid headlines on my way past the newsagent’s. It’s a memory that has stayed with me, and I was so grateful when it seemed Marie had beaten her illness. After all, with two small children, that’s what you’d hope for.

Ten years later she was well enough to tour, and did a concert at the Manchester Arena with Per Gessle. Offspring and I went, and Marie was definitely the star. Better voice than Per and much prettier. Nice memory, and we were lucky to catch them.

There is a book, actually; Kärleken till livet, by Helena von Zweigbergk. After the brain tumour Marie could no longer read and write, but she still had a story to tell. 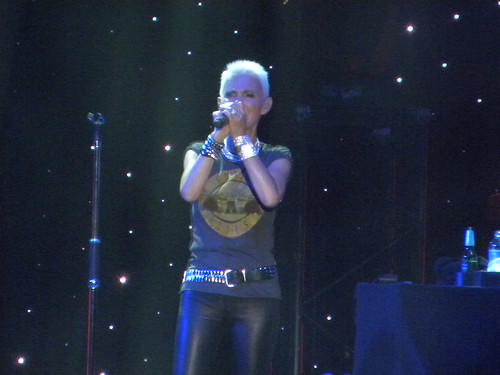