The Goldsmith and the Master Thief

Pushkin Children’s Books know when they are on to a good thing. So does the Resident IT Consultant who has, yet again, got his mitts on the most recent of the new translations of Tonke Dragt’s books. And I have to say, they always look very appealing:

“The Goldsmith and the Master Thief, by Tonke Dragt, is another translation of a Dutch children’s classic from Pushkin. Originally published in 1961, De Goudsmid en de meesterdief is essentially a series of fairy tales set in a medieval world which, in my mind, seemed to owe something to Bruegel’s paintings. 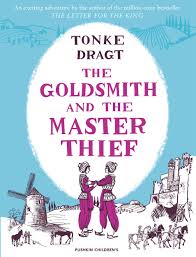 Laurenzo and Jiacomo are identical twins, and many of the stories depend on the fact that no one can tell them apart. As we read, we see their characters develop through a series of exciting adventures. Magic pays no role in these, though it often appears as if it might. Nevertheless, the tales, twelve in total, have something of the character of Hans Christian Andersen and the Brothers Grimm. At other points they could almost be the plot of one of Shakespeare’s comedies.

The translator, Laura Watkinson, is the same as for Tonke Dragt’s other books published by Pushkin. As with these, her clear, straightforward language probably makes a significant contribution to the readability of the book.”

I am obviously still in Hans Christian Andersen land, and it really does seem as if this would also make an excellent Christmas present for someone. You will know who.