The Bookwitch and Pullman screen adaptations

This time twelve years ago I was full of the latest Philip Pullman adaptation on BBC television. It was The Shadow in the North, and I loved it. I loved it so much that I persuaded the Guardian to let me blog about it for them. There was a lot to like, and I went on and on. 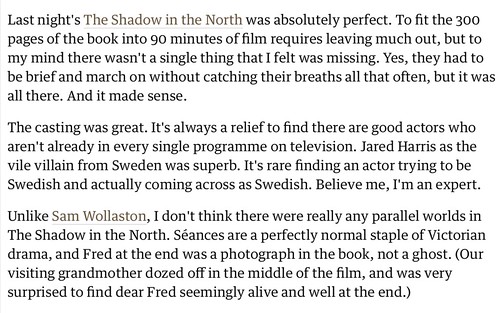 And now? I still like the various televised Pullman books. But the recent His Dark Materials I have almost managed to push from my mind. Not actively, but I’ve been surprised at how little I’ve thought about it. I never went back after the first two episodes, preferring to do other things when the Resident IT Consultant sat in front of the television for another six Sundays.

I’d happily watch the Sally Lockhart films again, not to mention I Was a Rat. ‘All’ we need now is The Tiger in the Well. Except I guess Billie Piper is too old. The Tin Princess might work, though, as Sally is older in the last book. And dare I say it? There was meant to be another book or two, or so Philip said a long time ago.