A Sudden Death in Cyprus

I was already a fan of Death in Cyprus, so it’s just as well Michael Grant added two more words to make his thriller A Sudden Death in Cyprus. Just so I can tell him apart from M M Kaye..! That one was rather more clean-living, not to mention romantic, than Michael’s offering sixty years on. 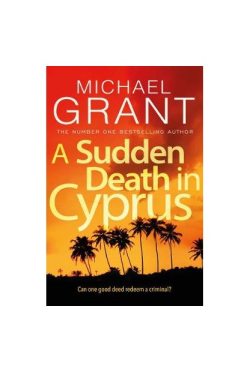 Adult it may be, but it’s still pretty clean, and I’ve learned at least one new use for a toilet. His author [former] crook David Mitre shares a lot of traits with Michael himself, including ‘the girl in the window.’ So Mr ‘Mitre’ may be a mere 42 years old, boasting symmetrical looks (I understand this is good), but he’s an attractive enough reformed villain, with enough brains, and Mr ‘Grant’ has given him a worthy crime to deal with.

Yes, there is death. After all the title suggests it. But mostly it’s a thrilling mystery-solving exercise, and I particularly like it when heroes can cobble together a team on the hop, so to speak; one that works well and gets us all where we want to be. Except possibly for David himself, who’d like to get a bit further with some of the ladies. (I believe it’s good for him to have to wait.)

And he is funny, this David/Michael. Just the right amount of funny. What more can you want apart from the gorgeous actresses, sullen French neighbours, FBI Special Agents, priests, sex workers and refugees? And hamsters.

When he’d solved the problems in Cyprus, I waited all of one day before turning to the next David Mitre story.

3 responses to “A Sudden Death in Cyprus”