You could tell it has been cold in Edinburgh. For the launch of his new book The Sins of Allie Lawrence on social media, Philip Caveney has walked, or been made to walk, all over the place to be filmed saying stuff about his book. This is good. I reckon authors should be made to work hard. And Philip looks reasonably handsome in a knitted hat, so that’s not the disaster it could have been. 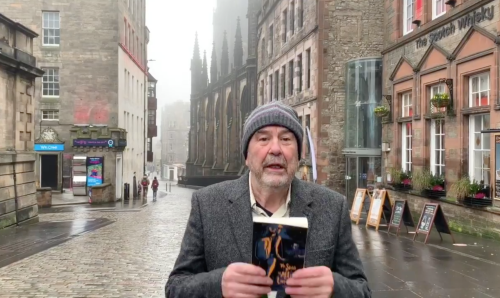 He started by reading from this, his 54th, or maybe 55th, book. He’s been at it for 43 years (which fact made Helen Grant say something less well thought through), so that could be why he’s not counting so well. But at least the flowers in the background were not plastic. Kirkland Ciccone wondered about that. 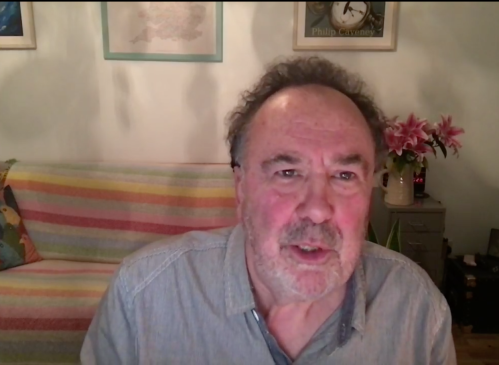 As you can tell, this launch was well attended by quite a few of Philip’s peers, and it felt almost as if we were meeting in real life. Except there was no cake. Apparently I was meant to do the cake. Oops. 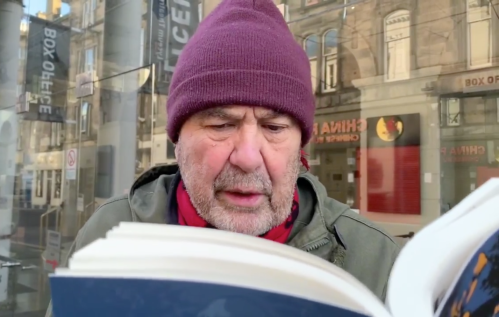 Philip took us round past Söderberg’s and round some fancy apartment near the Meadows, and at least two theatres, plus other Edinburgh sights. It made us all wish we were there. 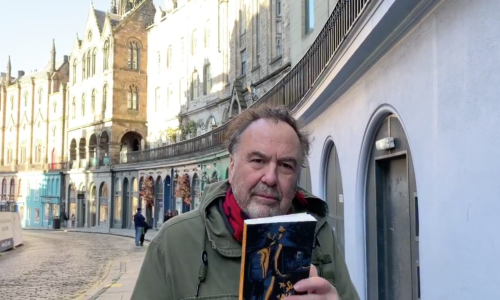 Once this prancing around town was over, it was question time, with lots of people asking, both from before and also during the event, as well as some recorded questions from three child readers. He likes his covers. In fact, he seemed to have some of them framed on the wall behind him.

‘The ideas will come’, he said ominously regarding where he gets his ideas from. And he does like all his children, I mean books, because if he doesn’t, then how can he expect the rest of us to like them? Good question.

There will be at least three drafts of a book, taking two to three months to begin with. Philip quite fancies being picked by Netflix, and who wouldn’t? His alter ego, Danny Weston, was originally a character in one his early books, and someone he needs for the really creepy stuff. Like his most evil character, Mr Sparks, in the book dedicated to me. Such a relief to know that.

Having autonomy when he writes  might be the best thing about being an author. In fact, if no publisher were to be interested in his books, Philip would still write them. He said something about ‘howling into the void’ but mercifully I have already forgotten what that was about. Sounds desperate. And just think, if his then 10-year-old daughter hadn’t wanted to read his totally unsuitable adult novel, there might never have been these books to entertain, or scare, younger readers.

Rewrite, rewrite, rewrite. He’s still not quite Ray Bradbury (but it can’t be long now), author of his favourite book, the book that changed his life. As to why Allie comes from Killiecrankie, Philip simply needed a ridiculous name. But not even this passed without argument (from a man closer to Killiecrankie than some of us).

That’s book launches for you. All sorts of people attend them.