You need five weeks between the squirrel columns

Some time back when things were normal, I wrote to the Guardian and asked them to send me Tim Dowling. They wrote back and said they would think about it.

Finally, last night Tim was in my living room! Admittedly only on screen, and he had Hadley Freeman with him. But it was good; two of my favourites at the same time.

The squirrels, as you will know, are his. But there’s a limit to how often even Tim can write a column about them. Not every week, that’s for certain. (But I did think it could be more frequently than every five…)

And he sounds so English! For an American, I mean. Almost like an Atlantic version of Colin Firth. I admired his living room (?), until it was suggested by someone that it might be Tim’s shed. Was it just a fake background, to fool me?

I knew Hadley’s ‘background’ was in fact her bedroom. I’ve been in her bedroom before. The bedroom with the wallpaper. 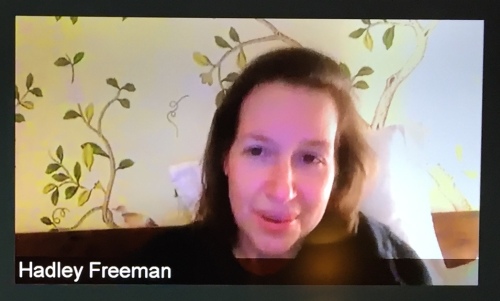 Apparently it’s hard writing a weekly column, although for Hadley it provides a break in her ‘parenting’ as she knows she should refer to the child care as.

For Tim the task is to make Mrs D laugh on Saturday mornings. She’s generally not ‘pissed off’ by what he writes, knowing full well she’s the funny one. Tim ‘only writes it down.’

If they were to write about last night, the first you would read about it – except on here, obviously – is Saturday next week. That’s as far in advance as they need to be. They both dread coming up with acceptable topics, and for Tim not much beats the squirrels. Or a hole in his sock. He started his writing career with a column [elsewhere] on ‘How to live off your girlfriend’. Because it’s what he did, having followed the future Mrs D to England. She has tried to send him back.

We all love Hadley’s interviews. When asked who her dream future interviewee would be, she said Eddie Murphy. Also a lot of already dead people. And apparently her recent piece on Angelina Jolie, which I enjoyed, caused very many readers to write in to defend Angelina…

Both Tim and Hadley have books on the go. To write, I mean. But Tim filled me with dread when he said he might need three months off to finish his novel. Don’t do it!