This is not as much fun as the title might suggest.

Lucy Hawking has long had a deep interest in autism, and knows much more about it than I do. She has written a short film script, which has been recorded for the Guardian’s new virtual reality site. It shows what the world – or at least a birthday party – looks like to someone on the autistic spectrum.

Technology is hard, and I don’t know enough about it. If you bought Saturday’s Guardian you’d have found a mention of this new VR site, and if you were very lucky you’d have received a free pair of spectacles with the paper, to use when viewing the video. I imagine it’s similar to the kind of 3D glasses you have for 3D cinema.

No glasses for us, but I registered online to be sent a pair. I gather you could also buy some. The information is (hopefully) to be found here. And there’s apps and stuff. I always get worried when people mention apps…

You can watch the film online – albeit not on Safari – and I did. But I imagine I didn’t get the full experience without the glasses. (It reminded me quite a lot of parties I go to, and I think we can safely say I’m not always the biggest fan of such ‘happy’ gatherings.)

I’m grateful Lucy has gone to the trouble of working out a way to show the neurotypical world what it [can] be like. As with most things, I am sure we experience them differently.

ABCs and much more

I do miss Sesame Street. We used to watch every lunchtime; me in the corner of the Klippan sofa, lunch balanced on the armrest (I think it only fell off once or twice), Daughter on my lap and Son nestled next to me.

Presumably we moved away from it gradually, or school got in the way. I can’t recall. And when I woke up missing it, I couldn’t find it anywhere. I have been thinking about Sesame Street on and off over the years, trying to convince myself I’m too old for it. That I don’t need it.

But when I read about their new autistic character, I was seized by a strong wish to start watching again. This time I researched a bit more. And it is on, but only on some pay channel I’d never heard of and that I can’t get. I mean, I suppose I can, but we don’t believe in paying for parcels of programmes that will rarely if ever be watched.

So I’m feeling a bit disappointed, to be honest.

I’m wondering, too, how it ended up on a pay channel. Is it because it is so valuable that you must pay, like for new movies and sports events, or is it because it’s so uninteresting that none of the regular channels could be bothered? Had a quick look at a typical day on CBBC and it was dire. I used to enjoy watching after school. Not everything, but quite a lot, and would have to drag myself off to cook dinner. Mornings were also good, but I could rarely fit in more than a minute here and there as we were getting ready to leave the house.

Whereas I’d actually sit down for Sesame Street. ABCDEFGHIJKLMNOPQRSTUVWXYZ…

Oh, Garvie Smith how I love you! (At least from a distance. Your mum loves you too, but I think we are both a bit exasperated by now.) 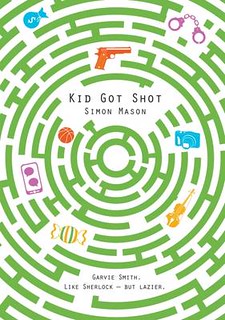 Simon Mason’s Sherlock/Cumberbatch crime-solving hero is back with another school murder mystery. It is still the exam period, so the deaths at Garvie’s school are coming hard and fast. And how could anyone sit exams, or revise for them, when there is a death to investigate?

Not Garvie. He sacrifices most of his GCSE exams for this unknown boy with Asperger Syndrome who has just been found shot. Pyotor was ‘known’ to everyone, while still not known by anyone, because he didn’t socialise or even talk to people at school. So how come this stickler for routine who spoke to no one was found dead in the middle of the night, close to a well known criminal?

Well, Garvie just has to find out. His old police pal DI Singh, who is in disgrace after ‘working’ with Garvie on the last murder, is the one who discovers the body, and this time the two do talk rather more easily, but poor Singh isn’t getting on too well with his colleagues.

Grown-ups are often stupid and can’t see what this lazy teen genius is doing (other than missing or failing his exams), but the reader knows Garvie will get there in the end.

Don’t miss this perfectly written, light but serious, and occasionally humorous crime novel. It’s the kind of book YA was invented for.

The State of Grace

It is – or ought to be – a well known fact that girls ‘hide’ their autism rather more successfully than boys do. This new book, The State of Grace, is about one such struggling girl, and as Rachael Lucas who wrote it is on the spectrum herself and also has a daughter with Asperger Syndrome, you can be sure she will get it right. Well, one right of many.

The story about 16-year-old Grace is full of neurotypical thoughts and behaviours. More than I’d have expected. But then, that is one kind of reality among many different kinds of aspie realities. It’s just not mine. 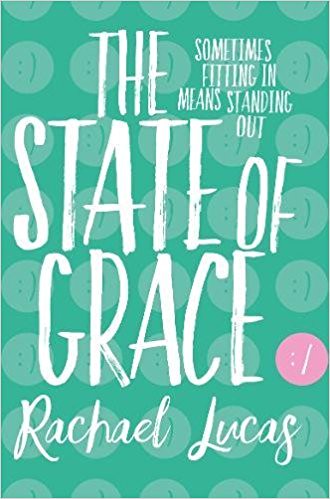 Grace has a younger sister who is very ‘normal’ and a mother who is pretty perfect as the mother of an aspie, standing up for her girl at school and knowing what she needs. That is, until she seems to stop being like that. Grace’s father is working away and no doubt it is tough for his wife, but I found the sudden change in parental support rather hard to deal with. As did Grace.

There is an almost too good to be true best friend for Grace, and when the two girls attend a birthday party it is just as difficult for Grace to cope with as you’d expect, but she also ends up kissing the most fanciable boy at their school, and is no stranger to giving her friend a full account of what happened.

But this is me nit-picking. When life gets tough, Grace escapes off to her horse Mabel, and she makes quite a few stupid decisions. One is working out how to be a popular girl and setting in motion some less well thought out ideas.

I’d like to think that in ‘real’ life Grace’s mother would have come to her senses sooner, and maybe the romantic interest wouldn’t have been the most good-looking boy around. But this is a fun story, it has lots of situations other aspies should be able to recognise, and there is a learning curve for all the characters.

We need more aspie books, and more girl aspie books, and especially ones like this one where it’s not all computers and robotic behaviour. And you just can’t go wrong with a Doctor Who t-shirt.

A hundred pages in I felt uneasy and decided to give the book I was reading a miss. It was a nice, easy read, and a subject I ought to love. But there was something vaguely uncomfortable about it too.

There are a lot of – mainly American – middle grade books about a young, clueless main character. They might be on the autistic spectrum, or not. The character – usually a boy – is sweet, hardworking, kind, often friendless, with some unusual home circumstances.

I generally like them, but have begun to wonder if they have become clichéd. In a way I suppose you can have them, as well as you have high school romance type books for the slightly older reader. And if you like that kind of thing, more books will be wanted, so perhaps there is no unnecessary glut.

This was the kind of book that comes with dozens of enthusiastic comments at the front. Now that I am jaded and cynical I’ve learned to recognise the people who contribute. It’s every single person working for the publisher, saying in their own words what a truly special story this is.

At first I called my break a pause, reasoning that if curiosity got the better of me I’d return to reading, but I haven’t yet. The bad things that made me stop have grown in my mind, while the charming aspects of the story are almost forgotten.

I’m not usually one to act gate-keeper, but in this instance the ‘bad’ was of such a type that I felt it was potentially going to give a child the wrong idea of what is OK to do. Even if it was with the best intentions. The cynic in me at first feared it would move into child-grooming territory, but I came to the conclusion this would be wrong, and the boy was going to be safe [in that respect].

Most likely it will conclude as a lovely tear-jerker with enough happy ever after for it to work. But I don’t need to be there.

The Roman Quests – The Archers of Isca

It is reassuring that I am not yet too old for Caroline Lawrence’s books. Occasionally I wonder if I will be, seeing as I’ve been reading her Roman mysteries for well over a dozen years. But I am still a child at heart. 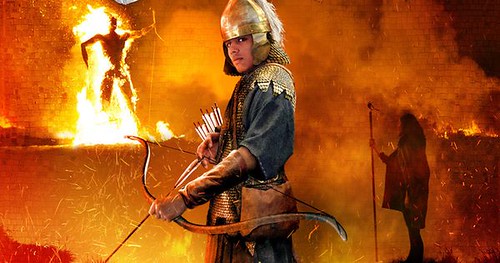 The second of four books set in Britain in AD 95, we follow the eldest boy, Fronto, as he sets off to be a soldier. It’s what he always wanted, albeit perhaps not quite like this. In Rome he could have been an officer, while now he must begin at the bottom. But for a boy who likes rules and knowing what’s happening and what he should do about it, army life is perfect.

Meanwhile, his two younger siblings continue as they were, living with the local people. At least, until Fronto’s little sister Ursula is kidnapped.

As with all Caroline’s books, this story educates as it entertains. I have learned more about life in Roman Britain through these books than I ever did from more historical texts. What’s more, I suspect I might remember facts for longer as well.

There are Druids and Romans, we learn about Roman baths and Boudica’s famous battle, and we find out how people lived; what they ate and how they worked and prayed.

And we are getting closer to knowing what happened to Miriam’s twin boys.

Isn’t this just a fantastic book title? It makes me want to go round muttering those three words to myself, trying to avoid twisting my tongue with the wash wish thing. 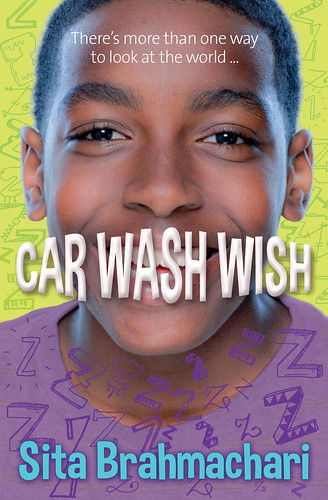 14-year-old Hudson is an aspie, and his dad is one as well, which is why Hudson now lives with his mum and stepdad and his unborn half-sibling, currently going by the name of Zygote. Hudson likes the letter Z. A lot.

To make matters worse, his dad’s dad has died and there is a funeral to go to, to dress for. His mum always felt that her late father-in-law, who had Alzheimer’s, took up all her husband’s attention, which is why they split up.

Hudson just wants to understand the world, and to be with his dad, as well as with his mum, and Zygote, with whom he chats by himself in order to introduce their family.

There is a car wash in his dad’s past, and the importance of this becomes evident as you read the book. That’s the car wash wish.