I’m a bit late to this, but found Eoin Colfer’s column for the Guardian on where he’s from (Wexford) such fun that I just have to force the link on you.

And I didn’t know about this, despite two interviews and countless encounters and conversations. Just goes to show you need to know to ask the right questions.

Also just goes to show how almost anything can set the imagination rolling, be it the Viking [Bookwitch] village underneath Wexford, or Philip Ardagh’s beard (for which there is no explanation and I will assume Eoin was merely being polite…).

Suffice to say, Eoin’s Dad sounds like a great father, and I’m very pleased to discover that there is in fact a requirement for all Irish writers to write a fairy book. It’s only right.

I also understand the issues between the Lower Elements and the humans far far better now. Bring on The Fowl Twins!

The adorable Hugless Douglas is introduced to the game of hide-and-seek. He’s too big to hide successfully, and reckons he’ll be better at seeking.

He is. He even finds little ones who were not playing. (Those were two very surprised ducks.) 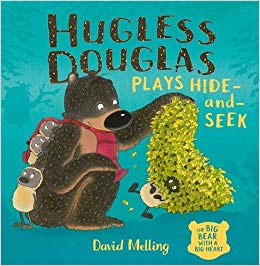 This little story might be about teaching children how to play hide-and-seek, or Hotter, Colder. But it’s probably more about taking care of your friends and not forgetting anyone when you’re out. You need to be home before it gets dark. If you are lost, you should do something sensible until you are found again.

And it’s obviously there to help you count to ten.

McTavish on the Move

Meg Rosoff’s and the Peachey family’s dog McTavish is back. It’s time for a move in McTavish on the Move. (Well, I suppose the title gives it away.) I understand Meg has recent experience of moving house – and it’s been put to good use, making everything pretty realistic. Except possibly for the ease with which Ma and Pa Peachey sell and buy the houses involved in this move. 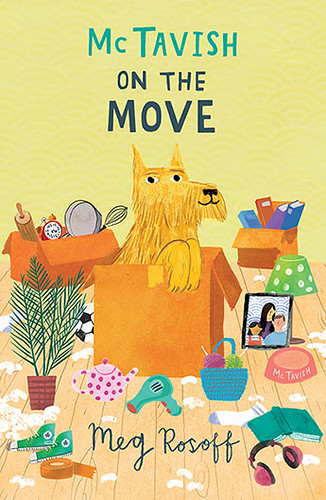 Pa seems to have had a personality makeover, which terrifies his family, but in the end his sunny disposition (hah) and general happiness make for a positive moving experience.

Although Betty isn’t keen, and McTavish notices. Trust him, though. He can work out what to do, and he does so with gusto. My own first days at new schools would have been vastly improved with the McTavish magic.

I believe this was the fourth – yes, it was – and last McTavish story. If it has to be goodbye, it’s a heart-warming and moving one. (Sorry.)

And one can always live in the hope that Pa’s personality reverts permanently to his more morose behaviour.

Keeping up with Findus

Yes, it can be hard keeping up with Findus. He’s a hyper-active cat who never stops. But Hawthorn Press are doing well with their publishing of Sven Nordqvist’s Findus and Pettson in translation by Nathan Large. This latest book is original 2019 vintage and just as enjoyable as the previous ones have been. 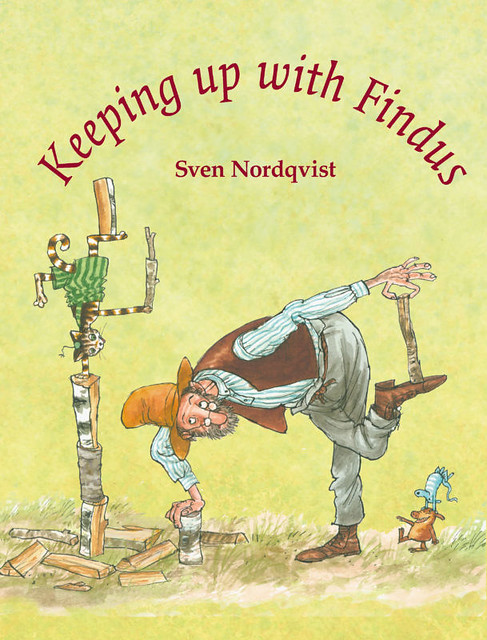 You have to feel a little sorry for Pettson. He’s old (-ish) and wants a quiet life, but with a cat like Findus, what can you do?

Well, you can refuse to ‘hop on both feet and bounce all the way to the house.’ But after that he gives in and gamely attempts Findus’s challenges. You can guess who wins, can’t you?

This is another sweet story, and the apple tree-climbing took me straight back to my childhood summer paradise. The nostalgia almost made me cry. And I must point out that my paradise had no apple tree in it. That’s how strong the Pettson and Findus magic is.

I hope children will never grow too old or too cool for this kind of book. 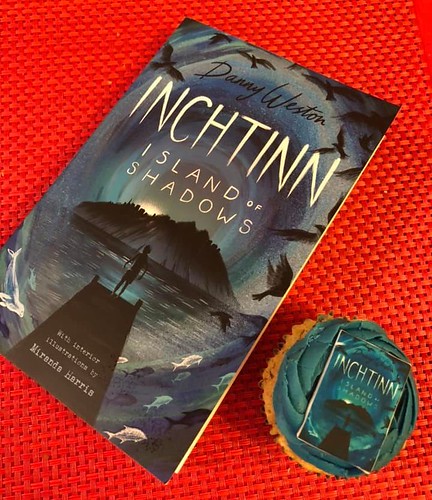 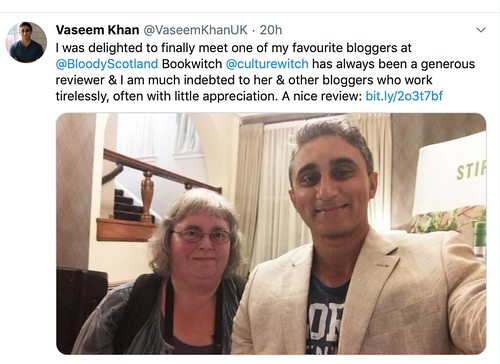 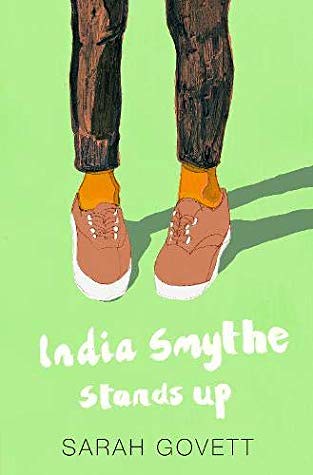 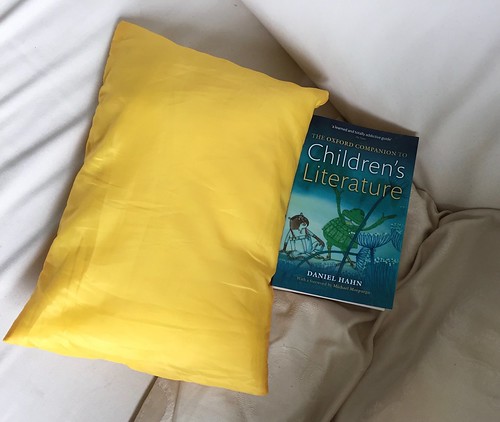 A Shot in the Dark

How quickly time passes! Lynne Truss set her crime novel – featuring the best of Brighton’s landmarks – in 1957, making it somewhat historical and retro. But my mind boggles as I realise that I first set foot in Brighton a mere twenty years later, and moved away ten years later still. That almost makes me retro as well. 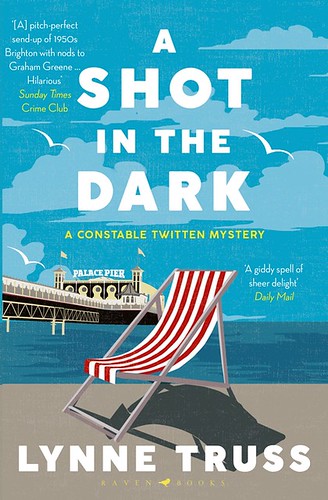 It’s amusing to find the streets and squares of Brighton in the names of the characters; Old Steine, Brunswick Square, and little Twitten, not forgetting Groynes, Palmeira and Adelaide.

Inspector Steine is an idiot. Sergeant Brunswick so-so, while young Constable Twitten doesn’t miss much, unless it’s social cues. What I don’t know is how long it would have taken me to know who the villain was, has Lynne not actually talked about that at her Bloody Scotland event. Was it very obvious, or just a bit obvious?

Whatever. It’s an entertaining story, poking fun at old-style crimes and old-style policemen, with a dash of Brighton Rock thrown in.

After the Bloody Scotland ‘cosy’ discussion about swearing and authenticity I couldn’t relax, but had to look for discrepancies. I always do this. There was much swearing for a ‘no-swearing’ book. And it’s never easy knowing what life was like around the time you were born. To some extent I’d say Brighton in 1977 wasn’t much different, albeit perhaps with a few more language schools.

I went to my first panto in the Theatre Royal. It was slightly more lacking in bloodshed that time.

If you are nostalgic for times gone by, this is your book.

Bad Day at the Vulture Club

‘Man cannot live on dhansak alone.’ But they certainly try, those Parsees at the Vulture Club. 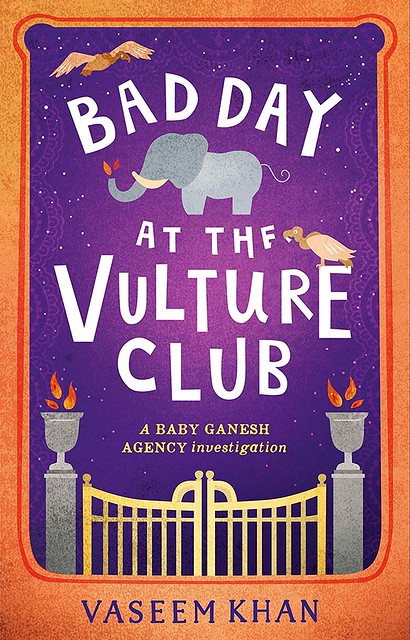 It’s time for Chopra and his baby elephant Ganesh to solve another murder when a wealthy and respected Parsee is found dead, in the place where the dead are put to be eaten by vultures. Could it have been an accident?

As usual Chopra does his best in the face of lack of belief in this ‘murder’ and meanwhile his partner Rangwalla is investigating a collapsed building. And Poppy, Mrs Chopra, has a new cause, Poo2Loo, much to Chopra’s embarrassment.

This latest crime novel by Vaseem Khan looks at some of the richest people in Mumbai, and also how some of the poorest people live, both in regard to their homes and jobs, as well as their [lack of] toilets. We get to know more about India today, with the help of fictional crime and a good dose of humour. Singing turds, anyone?

At times Chopra seems more literal than ever, even going so far as to point out to Poppy that ‘I don’t have a husband.’ And this time his mother-in-law actually has a point, and she’s starting to grow on me. Well, I suppose she is responsible for how the lovely Poppy turned out.

The crime turns round and round several times, and both the reader and Chopra think they know who did it, and they don’t, because they didn’t. And we don’t want it to have been one of the people we like.

But more than fairness in finding a murderer, we want a better and safer life for all Indians, at the mercy of crooks everywhere. This is neither cosy nor noir, but entertainment with humour, while educating us about that which we didn’t know or had forgotten about.