A S Byatt has a lot to answer for. I’ve now come across several reviews of Margery Allingham’s Traitor’s Purse, where the reviewer only read the book after her article in the Guardian last year.

Personally, I wanted to remind myself of the plot, so went to our Allingham shelf to reacquaint myself with the book, only to discover we didn’t have a copy. Hence its appearance on my Christmas wish list, and because it was the only item on the list issued to the Resident IT Consultant, I wasn’t massively surprised to receive a copy. Which, had been my plan all along. [Don’t give them a choice.] 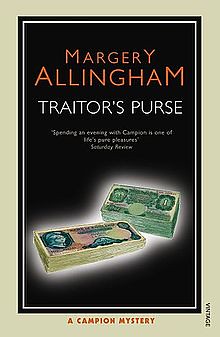 It’s been years since I read Margery Allingham’s Campion books. I loved them, and I rather loved him as well, being much more fun than Lord Peter Wimsey. And I obviously would have loved to be Lady Amanda; the girl who decided she was going to marry him.

In Traitor’s Purse, set in 1941, Campion has had a knock on the head and doesn’t even remember her, or his manservant Lugg, or who he himself is, let alone what he’s supposed to be doing. (Saving the country is what.)

Being a man, he doesn’t start asking useful questions like ‘Who am I?’ but sets about quietly grappling with each thing as it comes along. He makes the mistake of thinking Amanda is his wife, and his private fears about maybe losing her are wonderfully described. You take a girl for granted for years and…

This is a great detective trying to solve a puzzle in the dark. He works out who is good and who is bad, and almost what the problem is, but hasn’t got a clue what to do.

After this long away from Campion’s world, I noticed the social aspects much more. But it’s a marvellous story and the writing is as good as ever, and you have to overlook the fact that occasionally the upper classes are portrayed as more reliable than the rest of us. It’s the way it was.

But behind it all is the usual humour and courage and an exciting plot. ‘Good lord, he could climb like a cat!’ This is a handy discovery when you are forced to flee over the rooftops. Most of us will already know whether a route like that is likely to be successful, but Campion hasn’t got any idea of what he can and can’t do. He just knows he has to try.

My thanks to A S Byatt. I hadn’t read this one, and I’m so glad I did. Might be time to return to more old diamonds.

At least they wore hats

Stockport station had the right idea. It knew where I was going. (I mean, it would have, if railway stations could have ideas.)

I was somewhat less ‘with it,’ as I managed to pick the long way from Seven Dials (yes, how very Dodger appropriate) to The House of St Barnabas. But a witch has to have a hobby, and getting lost in London could be one of them.

On my eventual arrival I went where I always go; the ladies’ room. Random’s lovely Clare was there, and a Victorian lady of some kind. The Victorian lady turned out to be Philippa Dickinson in dress-up mode. She looked most distinguished. So did the many others who had entered into the Victorian spirit.

No spirit for me, so I had a glass of elder-something with salad in it. Very nice and refreshing, on what was a pretty thirsty day. And whereas I hadn’t dressed up, I did wear black, and my jacket is so old it goes a long way towards being Victorian.

There was a Punch and Judy man in the corner of one room. He said Punch would be happy to pose for me, as long as I photographed his best side. I think I did. (Between you and me, he looked worn out. Must be hard work, all that wife beating.)

After a while of drinking the salad and watching Punch punch Judy, there was a commotion at the door, and there he was; Dodger. I mean Terry Pratchett. Sir Terry! Very snazzily dressed, I have to say. Hat as usual, but not the usual hat, exactly.

He arrived in a horse-drawn carriage, bearing his own coat of arms. (There was such a crowd by the door I didn’t get a picture of the horses. Magnificent black beauties, they were.)

As the Victorians circulated, us 21st century people photographed them and stared. A beautifully crinolined Lynsey, incongruously wired Terry in a most non-Victorian manner, and Philippa was similarly equipped for her speech.

The MD of Random House Children’s Books spoke about how well Dodger has been received (there is a good reason for that, people!) and that it had reached number one on some kind of list. (She pretended to be from the 19th century.) Philippa apologised for the elegant venue for this book launch, explaining that she’d had her PR ladies crawling through every sewer in town, but failing to find anything suitable down there.

Terry made a reluctant speech (odd, isn’t it, how those who have every right to blow all sorts of trumpets, rarely want to?). His pal David Jason voiced his sentiments about Dodger, although he admitted to not having read it yet…

But I do believe Terry hinted that the way to a sequel was clear and that something might happen. Yes, please!

There was more Victorian mingling and circulating – with Willikins looking most fetching as a Victorian gentleman – and I drank some more salad, watched Punch and his fellow ‘actors,’ and so on.

A S Byatt was there. (I like it to be known I rub shoulders with the best shoulders in London.) She’s a fan, I believe. Transworld’s Larry Finlay stumped me by looking terribly familiar, and I required professional help in working out who he is. (It’s my age. I know things, while at the same time I don’t know them.)

Eventually Punch quietened a bit, and I took my leave, and promptly got lost again. I should have broomed.