Kindle-sharing is the new thing at Bookwitch Towers. With me actually paying £1.99 for ebooks that the Resident IT Consultant might also enjoy, I can’t just suggest he doesn’t drop my [paper] book in the bath. So, what’s his is mine, and the other way round.

The Resident IT Consultant has had the benefit of reading some of J D Kirk’s crime novels. If someone reads more than one, it is an indication the book wasn’t too bad. Or so I believe. But recently I gathered J D had put in an Ofsted inspection where none ought to be. When I told J D he was so upset he stopped talking to me. Until I woke up and discovered he and the Resident IT Consultant were on such friendly terms that they had balanced a tankard of beer on my head.

The Edinburgh International Book Festival are planning some December Winter Warmer events. On Saturday 12th there is a full programme of book events for you. Free to access.

It’s Advent. Daughter requested I get out the Jostein Gaarder advent book for her daily read. The thing that always strikes me is how his book sits right next to Cornelia Funke’s advent book. It’s almost as if it had been planned.

We also have a real, live – well, you know what I mean – advent calendar. We take turns opening the doors. This was sent to us by a very kind author, who ‘lives’ a little bit along from Jostein on the shelf.

I have been asked for a wish-list. The Resident IT Consultant wants help with ideas for me. Daughter does not want a list. She will come up with her own ideas. Which are usually very good. My list had only books on it. I know. This is crazy. I don’t need books. But I need other stuff even less. Except when Daughter has come up with the perfect thing. I’ve still to read my way through the books from last Christmas. And the ones I bought myself in August. Also the books I bought the Resident IT Consultant last Christmas…

I reckoned I’d have a spare, once I’d placed our various Advent lights around Bookwitch Towers yesterday. It took me most of the morning, which is because we have too many lights, because I felt I had to dust before, and because it had been a very long time since any dusting happened around here. 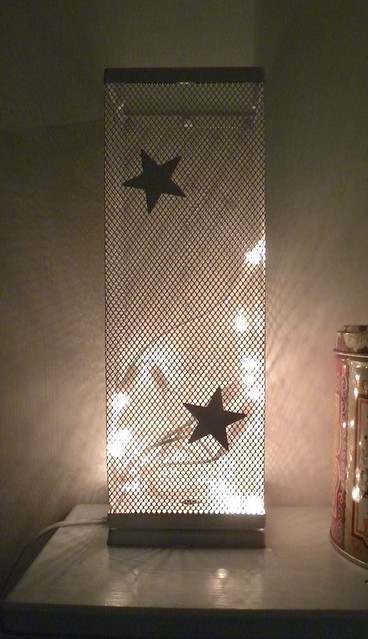 But at least we managed to unearth all the stuff from the building site-cum-garage, which is a good thing. The spare was expected since we are currently a room down. What was surprising in the end was that it wasn’t the spare I’d been expecting. And as it turned out to be the lightbox, I put it on a shelf in the kitchen. Near the lentils.

While I dusted, the Resident IT Consultant was out finishing his walk around the Fife coast. I’d forgotten to warn him to look out for James Oswald’s house or he could have popped in to say hello. 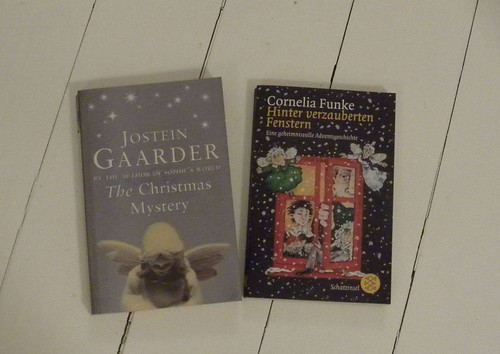 And while searching for some other thing the other day, I came upon these two Advent books. One of them, the Jostein Gaarder is one we habitually lose, and have to buy another copy of. The other is Cornelia Funke’s Advent calendar in German, which I turned the house – almost – upside down for last month, before travelling to Newcastle to meet Cornelia.

Just my luck to miss it then and to find it now. Though I suppose it beats not ever finding it.

Thinking of translations, the Gaarder was the example at my ‘SELTA talk’ in London three weeks ago, of a book I have found to be much more readable in English than in Swedish. Both translations. Maybe I should have tried it in Norwegian. Whereas Cornelia’s story has not yet appeared in English. I wonder if that is because English-speaking children mainly eat chocolate in the run-up to Christmas, rather than mark Advent in other ways?