As the rest of the literary world gathered in London for the announcement of this year’s Carnegie and Kate Greenaway medalists, I made my way to Edinburgh for lunch with a literary lady. It’s always nice to get out and see new places and new people and to pretend to be a proper grown-up. So over 35 years after eating at Brown’s in Oxford, I’ve now tried the more local-to-me branch north of the border.

On the way I passed Charlotte Square. It looks so small when you see it without a book festival on top. Just grass, and trees, with a fence round it. Soon, though.

For anyone who missed it, Geraldine McCaughrean is our latest Carnegie winner – second time round, I believe – for Where the World Ends, and Sydney Smith won the Kate Greenaway medal with the book Town is By the Sea. Thank goodness it was someone as senior as Geraldine who won, because who else would have the nerve to tell publishers off for dumbing down the language in children’s books?

By the time the lunch was over and my literary lady and I made our way to two different shoe shops; one for her, one for me, Son had begun his PhD viva ordeal at the nearby university. I’d have been there if they let people in to watch, but they don’t. I will simply have to assume the boy was brilliantly clever and dazzled everyone in the room, including the not one, not two, but three supervisors. And, erm, the specially flown in expert. From Norway, I believe.

On the train home I continued reading one of the books one of his supervisors – Peter Graves – has translated. But more about that some other day.

There are many ways to launch a book. Yesterday I had tea out with Baby Tollarp and his mother. He had one of those lovely little board books handed out by the Scottish government to all new babies in Scotland. BT launched his continuously. Mostly on to the floor. From where his mother picked it up and handed it back and then it was soon on the floor again. He had quite a sneaky look about his lovely young face when he had worked out how this was done. Slip book accidentally on purpose down the side of the highchair. Wait for it to be returned. Repeat. 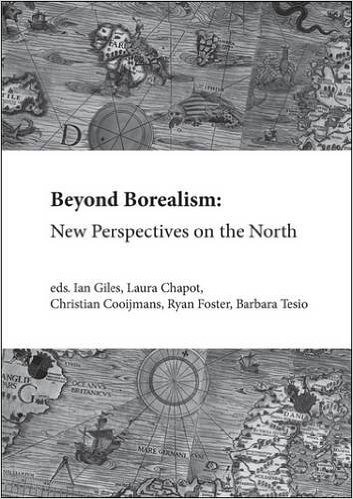 From there I went straight across Edinburgh’s George Square to another baby book launch. The Resident IT Consultant and I had been permitted to attend Son’s book launch. This was not a boardbook. Beyond Borealism: New Perspectives on the North is more of a collection of ex-conference papers, co-edited by five of the Scandinavian Studies department’s doctoral candidates (Ian Giles, Laura Chapot, Chris Cooijmans, Ryan Foster and Barbara Tesio). 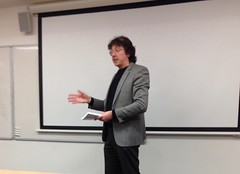 There was admirably little talk. The department’s Alan Macniven introduced the editors. The editors said a few words, mostly along the lines of ‘let’s open the fizzy bottles.’ And then they did, and some of the corks made gratifyingly noisy journeys towards the ceiling. 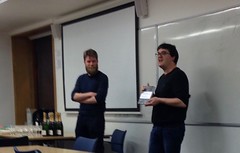 There were cheeses and olives, crisps and sweets. Lots of mingling. Money changed hands whenever someone wanted to buy a copy of the book. This went on for a couple of hours. 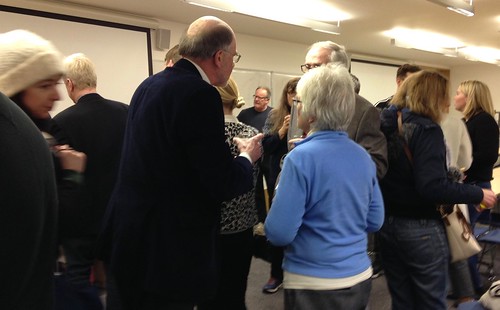 Once the remaining bottles had been hidden under someone’s desk, Son and Dodo walked the wrinklies – as we are now called – towards a rather nice Indian restaurant where we were allowed to buy them a belated birthday dinner. After some quite agreeable dosas they deposited us on the bus back to Waverley, with our bus passes and senior railcards and everything.

‘Who’s that with them?’ said Daughter as we saw Kurdo Baksi and his chair Peter Guttridge hovering just outside the door before Kurdo’s event on Sunday night. ‘It looks like Alan Macniven,’ she continued. It was. So there we were, about to listen to Stieg Larsson’s friend and colleague Kurdo Baksi, when Son’s university tutor turned up as our second interpreter for the day.

That was a coincidence, and so was Daughter’s presence. I had secured a press ticket to this sold out event with the utmost difficulty. And then when we interrupted Kurdo’s ice cream licking earlier in the day he simply said he’d fix another ticket… And he did. It’s probably not the only thing he has ever fixed.

After dinner we waited for Kurdo’s photocall, and couldn’t help noticing that photographer Murdo McLeod had just left. So no Murdo for Kurdo. (Sorry. I just had to say that.)

Kurdo is nothing if not a showman. He claimed to have had to learn to perform and to answer questions when helping his father as a child. He is funny. The subject of his now dead friend could be seen as just sad, but Kurdo joked about most things. Things are easier to hear if you are laughing. It could also be easier to sneak things by if told as a joke. I gather he has been known to make things up, but then we probably all have at some point. And the truth looks different depending on who you are.

His book Stieg Larsson, My Friend is admirably short, and I imagine it contains much of what Kurdo told us about on Sunday night. Stieg put his own good characteristics into Mikael Blomkvist, and his bad sides into Lisbeth Salander. Someone asked if that meant Stieg had Asperger Syndrome. Personally I feel that’s very plausible, but unfortunately the question referred to AS as a learning difficulty, so Kurdo denied it and said Stieg was perfectly well. And it’s not the same thing, and clearly he wasn’t well. Something to do with the twenty coffees a day and the chain-smoking.

Umeå University recently asked for money for a chair in Stieg’s name, which Kurdo was amused by, seeing as the university had refused to accept him for a course in journalism many years ago. But ever the optimist Kurdo felt it was good, or there would have been no move to Stockholm, and no Millennium books.

During all this Peter Guttridge was left sitting there with little opportunity to join in. Kurdo started off with a lengthy monologue, and he did this in English which was anything but perfect, but still done very well. Alan Macniven was only called on in a few emergencies.

The trouble with men like Kurdo is that they are so damned reasonable. Peter asked about the suggestion from Eva Gabrielsson that Kurdo’s book is slanderous, and he agreed. He has at all times tried to be friends with all parties in this ugly story, and feels he can’t stop talking to the Larsson men to please Eva.

He even said he believes the new Hollywood film version of The Girl With the Dragon Tattoo is better than the Swedish film. This is without having seen it, because he doesn’t want to miss out on an opportunity to attend the premiere in Hollywood.

You can go a long way on charm.

And he did seem to be pleased to have found a Swede in Charlotte Square. But I wish he hadn’t put me on the spot with a question on whether Anne Holt is Norwegian. She is, but her name is awfully identical to Danish Anne Holm.

When he got going on the subject of Stieg and women, he stopped abruptly, causing Peter to point out ‘you can’t just stop there!’ Well, he did.

You might be best to read the book for all the facts. It’s expensive, but will no doubt give Stieg Larsson fans a bit more to think about.