Yesterday the Bookwitchy feet touched Falkirk soil for the first time since that fateful day in 1973. She (I mean I) saw red even on the train (a woman wearing a lovely red coat, but who wasn’t actually going where I was going). My mind was on red things, as there was a sort of dress code for attending the RED Book Award in Falkirk, and I’d dug out the few red garments I own. 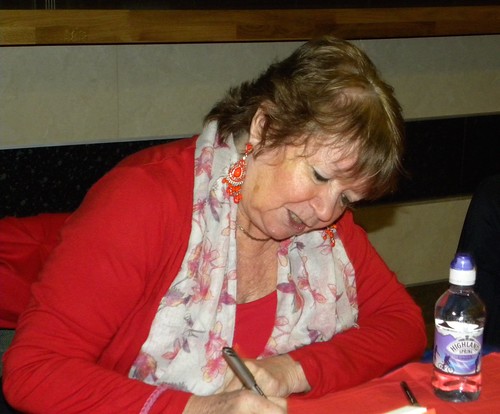 Ever since I knew we’d be moving to Scotland, I’d been thinking how much I wanted to attend the RED Book Award, and then it happened so fast I barely knew what I was doing (I had to ditch Daughter, and feed up the camera battery), but everything worked out in the end. I walked to fth (Falkirk Town Hall), which was teeming with people in red, and I found Falkirk librarian and organiser Yvonne Manning (a Geraldine McCaughrean look-alike if ever there was one), and she showed me to the front row, despite me mentioning how I’m a back row kind of witch. There was coffee, and there were authors. All four shortlisted authors were there; Cathy MacPhail, Alan Gibbons, Oisín McGann and Alex Woolf. 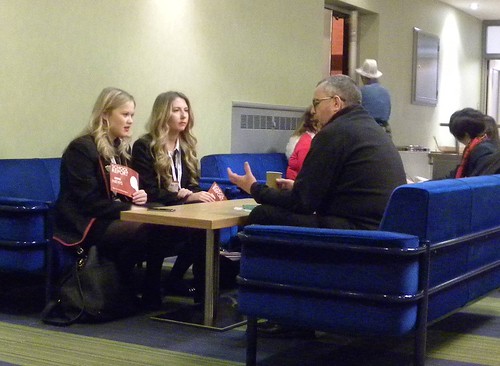 They were being interviewed by some of the participating schools’ pupils, and it was rather like speed dating. I chatted briefly to Cathy, who’d brought her daughter along, and who said how nice Alex Woolf had turned out to be. (She was right. He is.) 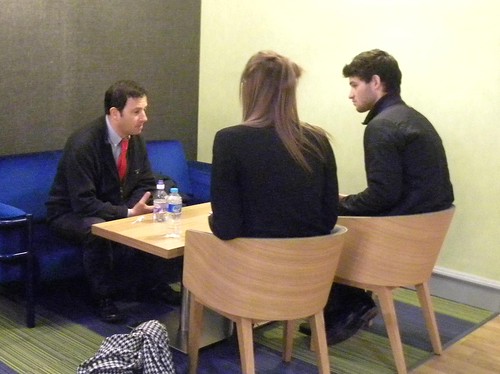 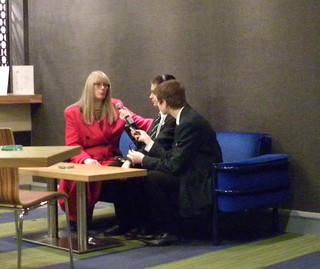 I found a very red lady, who turned out to be sponsor Barbara Davidson, who makes the RED award, and whose wardrobe apparently is extremely red. I like people who know what they like in the way of colour. There were even helpers wearing red boilersuits.

Back in the front row, we were treated to Yvonne Manning entering dancing, wearing a short red kilt, spotty tights and red ribbons in her hair, and she got the popstar reception treatment. Apparently ‘timing is everything’ and she managed to steer the whole day to a tight schedule.

There was a prize for anyone who found a red nose under their seat. Obviously. Another prize was offered for the school that left their seats the tidiest. After short introductions for the authors, the schools had prepared short dramatised sketches of the shortlisted books. 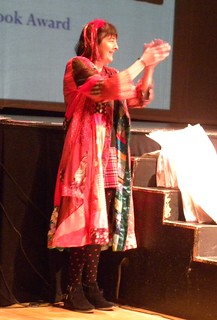 At this point the Mayor came and sat on my right. Sorry, I mean Provost. Mayors are Provosts up here. Same lovely necklaces, though. And Yvonne reappeared wearing an incredible red patchwork coat, well worthy of Joseph, and it earned her some appreciative whistling from the audience.

Then it was time for prizes for the best book reviews, and the winning one was read out (after the break, after Yvonne had apologised for forgetting this important thing). She’s sweet, but also hard. The authors were given four minutes each to talk about their books; ‘speak briefly!’ They spoke about where they get ideas from. Oisín stared at people until it got ‘creepy enough.’ Cathy had found out about a real vampire in Glasgow in the 1950s, and still regrets she couldn’t have ‘It Walks Among Us’ as the title for Mosi’s War… 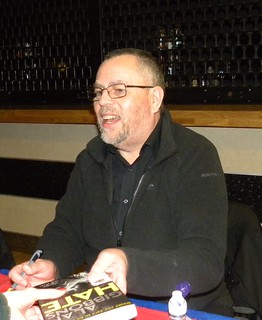 Alex described how his Soul Shadows came about, which involved him writing one chapter a week, and then offering his readers several options on how to continue and they voted on which they preferred. Alan could well believe in Glaswegian vampires, and mentioned meeting Taggart once. Football is his passion. Alan’s. Not Taggart’s.

We had more dramatised books and then we listened to the woman who is the answer to my prayers. Anne Ngabia is the librarian at Grangemouth High School, and in the past she has set up little libraries in Kenya. The RED Book Award is even being shadowed by a school in Nairobi, and she showed us pictures from her libraries, as well as a short film based on Mosi’s War that they’d made. 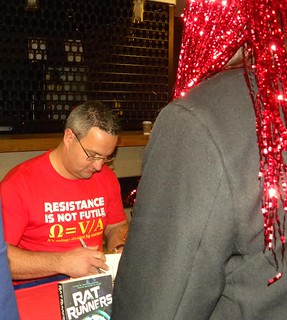 After a very nice lunch, where I just might have offered to sue the Provost as I got him to test the veggieness of the food (if he got it wrong, I mean), the authors signed masses of books and many other things as well. The pupils thronged so much that it was hard to move for the sheer excitement of it.

Back to business again (the people of Falkirk don’t believe in half measures when they do their book awards), and we learned that the dramatised books we’d seen would tempt most people to read Alex’s book, Soul Shadows. They do believe in prizes too, so next to be rewarded were the red clothes, etc. I’d tried to bribe the judge over lunch, but it seems the prize wasn’t for old people. He turned out to be quite good at rap. Something along the lines of Red Hot. (If you want to win, I reckon wigs or pyjamas is the way to go.) 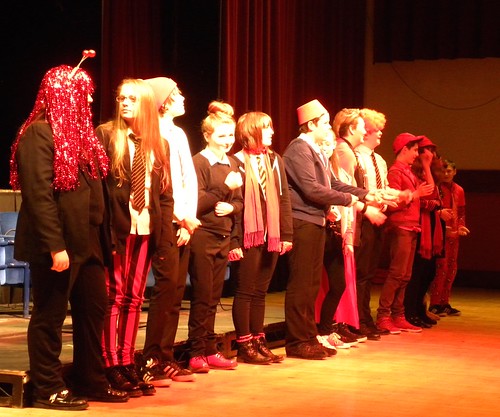 With ‘no time for fun’ the authors were then seated in two blue velvet sofas (they got the colour wrong there, didn’t they?) and the Q&A session kicked off. Good questions, and lots of them, so I won’t go into detail here. Halfway through Oisín was asked to do a drawing, and Yvonne magicked up a flipchart out of nowhere and while the others laboured over more answers, Oisín drew a fabulous picture of, well, of something. 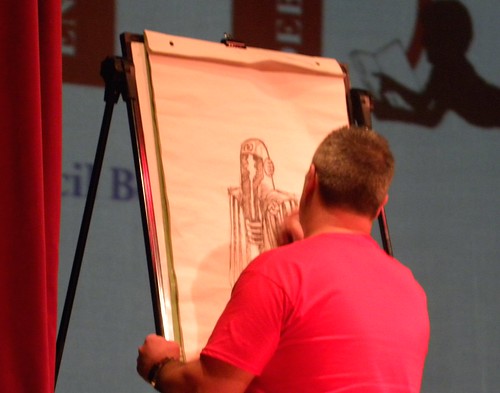 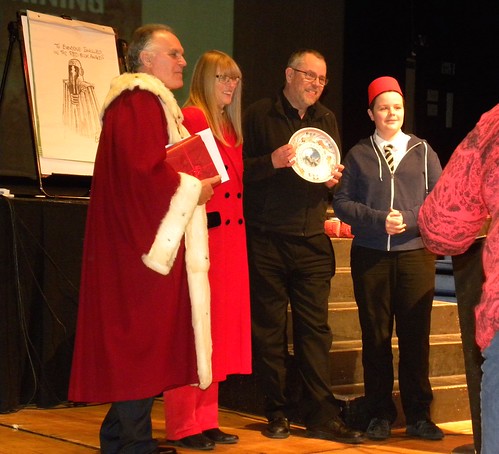 Finally, the time came to announce the winner. Provost Reid – in his beautiful red gown – made everyone stamp their feet to sound like a drumroll, and I rather hoped the ‘terraces’ behind me wouldn’t collapse under all that vigour. He told us how much he likes books, and then it was over to a fez-wearing pupil from Denny to open the red envelope and tell us the winner was

Alan Gibbons. His thank you speech was on the topic of ‘ you don’t know what you’ve got until it’s gone’ and that could be libraries, or it could be your life. We complain too much in our comfortable lives, compared to those readers in Kenya we met earlier.

There were prizes, naturally, for the runners-up. And photos. Lots and lots of them. Cathy commandeered her handbag to be brought and she pondered taking a selfie, but in the end she went for a conventional picture of her and her pals. 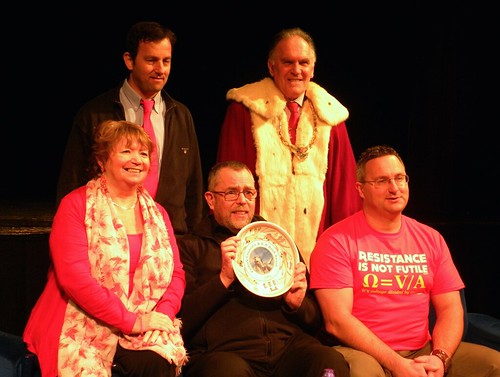 Us old ones chatted over mugs of tea before going our separate ways. And some of the helpers and I have vowed to wear much warmer clothes next time (that is, if I’m ever allowed back).

A big thank you from me, to Yvonne for inviting me when I dropped a heavy hint, and to her helpers for helping so well, the schools for their magnificent work, and to Cathy, Alan, Oisín and Alex for writing the books that caused us all to be there, at fth.

And the prize for tidiest row of seats? The prize was Oisín’s picture. And I can assure you it won’t go to us on the front row. Cough.