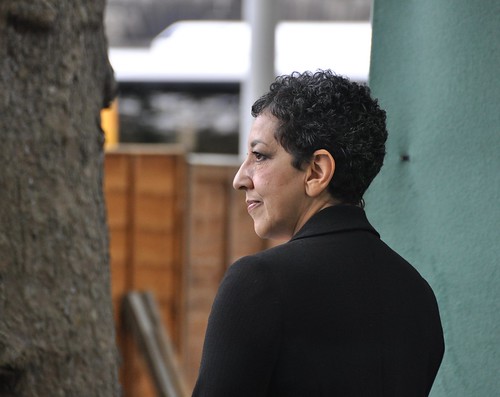 I was sorry to see Andrea Levy has died. She was my age, which makes it feel so much worse.

Never having read any of her books, I still have that opportunity. An author leaves so much behind. But I don’t know why I didn’t before. There was time before I got caught up with non-stop children’s books.

Actually, I might know. There is a difference in how the press writes about a living person and how they are portrayed after death. I keep saying it’d be nice – for everyone – to read more about someone now, rather than save so much for when it feels too late.

I ‘met’ her once in Edinburgh, and having revisited that day just now, I do remember how appalled I was at the way the press officer held her glasses while the photographers did their thing. 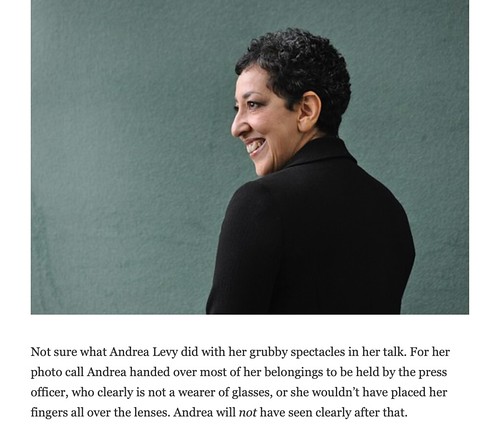 But I suppose there are worse things in life than grubby lenses.

but I must begin with ‘my’ Irish boys, Declan Hughes and Stuart Neville. Had they known they’d only find a bookwitch and a photowitch at their photo call on Saturday, they’d have scarpered back across the Irish Sea. I had looked forward to their photo session quite eagerly, but not even I could have foreseen that all the other press photographers would have taken such a hefty break. But, we were there, and hopefully Declan doesn’t remember the stupid witch from the Bristol CrimeFest, and Stuart may have encountered me on Crime Always Pays, but that’s more anonymous. They are smiling carefully in the hopes that we’ll let them go. The photographer tried to get them to stand with their backs together and they jumped some considerable distance in the opposite direction at the mere suggestion. Oh well.

An hour later A C Grayling fared little better, getting two photographers. Both female. (Take that, photo boys!) Both Swedish, or at least 75%, to be accurate.

Strange then, when you think about it, that the paparazzi so willingly marched across Charlotte Square at noon, actually leaving their safe cocoon of a yurt to snap pictures of two fat blobs behind the Corner theatre. (None of them me.)

I finished the day listening to Michelle Lovric discussing Venice as a setting for novels with Katie Hickman and Al Senter. The rain suitably chose that point to start raining. I saw both A C Grayling and Mary Hoffman in the audience, presumably checking out the competition. Michelle read from her new adult novel The Book of Human Skin, and Katie from The Pindar Diamond. They see Venice as a bit of a Hogwarts, and they both love research. In fact, I get the impression everybody enjoys researching for their books.

The beautifully dressed Michelle is someone I barely know, but she very generously arranged tickets for me. In actual fact, it was a day of authors giving me tickets to their events, with both Mary Hoffman and Theresa Breslin doing the same. Thank you, ladies! Before rushing off for my train, I made sure of being first in the signing queue with Michelle’s next children’s book, The Mourning Emporium in my hands. Her signing of this anchovy-free book was only very slightly delayed by the kiss from Mr Lovric, who most likely is not Lovric at all, but a Mr Something-else. And it was his wife he kissed.

It was also a day for husbands. Other people’s. Not mine. I have now met Mr Hoffman, who I know is not Hoffman, but when you’re married to a star, you put up with these things. And I had Mr B live up to his promise of a good t-shirt for the talk by Mrs B. That man not only wears a Nostradamus tie, but has had an Inquisition t-shirt printed specially. And he’s not averse to taking illegal photos in palaces all over the world (for the research, you understand) and getting thrown out.

A day for Venice. A day for husbands. Also a day for Random encounters. Some more random than others.

In the signing tents we found Babette Cole and Andy Stanton. At least I hope so. Babette was signing Babette Cole books, and that man with no black curls looked sufficiently like Andy that he must have been Andy. You know what I think about people and new hair!

Not sure what Andrea Levy did with her grubby spectacles in her talk. For her photo call Andrea handed over most of her belongings to be held by the press officer, who clearly is not a wearer of glasses, or she wouldn’t have placed her fingers all over the lenses. Andrea will not have seen clearly after that.

The signing queue for Jacqueline Wilson was long. Just imagine, then, how long it’d have been had they not raffled the places in the queue. It’s enough to make you turn to press photography. Pleased to see paparazzi also have daughters who like Jacqueline Wilson’s books.

Jacqueline looked great in jeans and boots with a blue floral top. (Is black out?) And those rings. The boots were really great, but you’ll have to take my word for that, as newly arrived photographer no.1 omitted to snap them.

When you’ve heard someone speak before, it’s never obvious that you’ll hear something new next time. Theresa Breslin delivered the goods, despite this being her second Edinburgh outing talking mainly about her Prisoner of the Inquisition. I got to see the gas mask I’d heard about from Linda Newbery, although that was more WWI than the Spanish inquisition. Theresa had been required to bring interesting artifacts, which came as a bit of a surprise to her.

This former librarian really likes books. They are easy to use. You can fast forward, rewind, play. Whatever you like. The French may have said about her Nostradamus Prophecy that it’s Dumas with a dash of Dan Brown, but Theresa’s happy with that. She, too, could do research the whole time and not write at all. Teaching history in schools with the aid of Blackadder strikes her as a good idea, and according to her both Queen Isabella of Castille and Catherine de Medici were far better than history writers (men) make out.

Last – although first – and by no means least, we have the Duchesa of Bellezza, aka Mary Hoffman. The event was introduced by Michael Scott, a great fan of Mary’s. Again, I have listened to Mary before, not to mention interviewed her, but this was a most interesting talk. We got a brief, but clear, summary of the five Stravaganza novels, and as a ‘completist’ Mary commiserated with fans who wanted to go on collecting hardbacks with the old covers.

To preempt being asked where she gets her ideas, Mary told us how Stravaganza came about. It was all down to a family holiday in Venice, going on a gondola trip with old and un-handsome gondoliers. That started a ‘what if’ thought on how to get handsome young men to propel you around Venice.

I gather the reason we get such likeable characters in Stravaganza is because Mary herself becomes them, so she is the Duchesa. She is also a one woman company who will let herself have the day off if she asks, but can also be hard if there are deadlines.

There was a sigh of disappointment from next to me when Mary said book six, City of Swords will come in 2012. What’s wrong with 2011? But she did say that ‘what we all want’ will happen when we get there. And we know what that is, don’t we?