I must begin with part of the same quote by Elie Wiesel that Eoin Colfer and Andrew Donkin use in their graphic novel Illegal; ‘no human being is illegal. That is a contradiction in terms. … How can a human being be illegal?’

There was never a more important time to remember this than now. We believed we had moved on, learned something. Even that we were fairer and more aware than we (or ‘people’) were decades ago.

Illegal is a disturbing graphic novel about two brothers from Africa trying to reach Europe, for a better life, and hopefully to find their sister who left first. 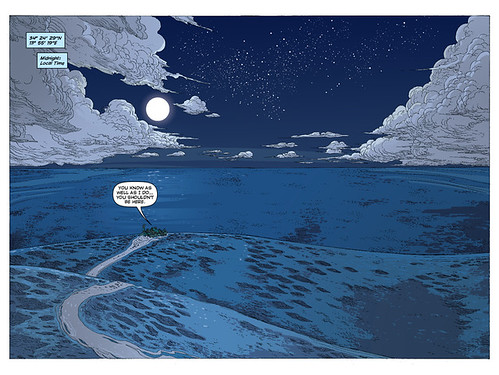 Anyone who says our immigrants come for the easy life of ‘our’ benefits is ignorant. These people work so hard. So very hard, because they need to earn enough money to pay the people-smugglers who put them in unseaworthy vessels and send them out to sea, to drown, or hopefully reach land on the other side.

And when [if] they arrive, they hope to be allowed to stay, and they will look for work. And they will work.

In a way the story about Ebo and his big brother Kwame is not new at all. I’ve read similar tales over and over in books like this, or in the newspapers. But as a graphic novel the horror becomes more apparent, because you see what they are going through. Where they came from, what the – usually very long – journey was like, and the horror of fearing for your life trying to get to a place where they are not welcome or wanted.

This is a beautiful book, with illustrations by Giovanni Rigano and a story told by Eoin Colfer and Andrew Donkin, and lettering by Chris Dickey. Or it would be beautiful if the pictures could tell a sunnier story. Instead we see these two boys and their fellow travellers being cheated, robbed, threatened and even turned back when they’ve tried for so long. And after that come the boats, small inflatable ones or big ships overcrowded to the point of sinking.

Some people make it safely all the way. Many don’t.

It’s so easy to root for Ebo and Kwame, but whether or not they are successful, there are countless others who never will be.

I hope the fact that this is a graphic novel will mean that the book can reach readers who might otherwise not read this kind of thing, or learn the truth about our world. A world where a drowning mother might well thrust her little baby into the arms of a young boy who can barely swim, in the hopes of saving her child.

No benefits in the world can make up for this kind of experience.