I do like a good anthology of themed short stories. Especially Christmas themed. There is no murder so lovely as a Christmas one… Hang on, that doesn’t sound right. But you know what I mean.

I hung on to this Murder in Midwinter collection, edited by Cecily Gayford, until I felt Christmassy enough. The stories weren’t all absolutely set at Christmas, but at least in the colder, snowier part of the year. Some are quite old, others a little more recent.

We have some nice blackmail in the family, cunningly devious husbands, as well as the problem with dustbins and strikes. There is the rather sweet – and exciting – story about a boy in care, and then there was the Margery Allingham that made me forget everything and which, while I could sort of guess the direction the mystery was going, I didn’t quite see the last bit coming. That woman was a master of funny, caring, intelligent crime stories, be they long or short.

And give me a snowy, retro kind of cover picture, and I’m yours. 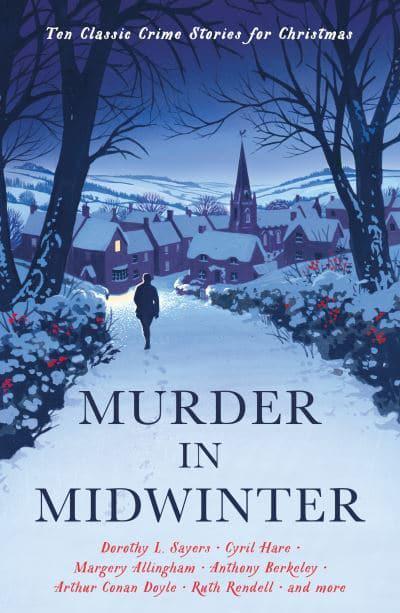 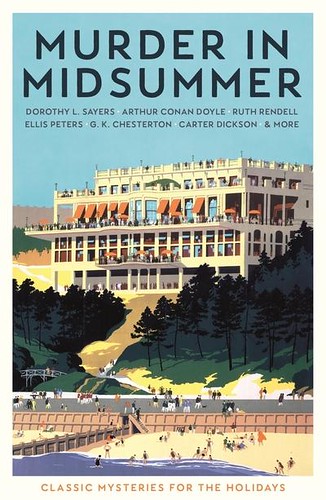 Running Girl by Simon Mason will be on my best of 2014 books. Just thought I’d give you an early heads up, saving you the eleven month wait.

It is also – obviously – the book I was referring to on Saturday. There really is not enough crime in fiction for teenagers. Thrillers, yes. Other kinds of adventure, yes. Crime for younger readers, yes. Despite reading the not terribly enticing blurb for Running Girl, I didn’t expect what I got. From the first chapter I was almost weeping with delight, if that is possible.

16-year-old Chloe goes missing before being found dead. DI Raminder Singh does a reasonably good job of detecting (at least he wants to find the murderer, rather than just pleasing his chief with a quick solution), but he would have got nowhere were it not for Garvie Smith, a school friend of Chloe’s.

Garvie is a nightmare. Easy enough to love in a book, if you are the reader, but in real life he’d be the end of you. Think Margery Allingham’s Albert Campion and Benedict Cumberbatch as Sherlock, and make him a black 16-year-old living on an estate, hanging out in the park, drinking and smoking (and not just tobacco) with his mates, and driving his single mother demented with worry.

Add to this an intellect very much above normal, a disinclination to attend school, let alone revise for the upcoming GCSEs (I’m not surprised, seeing how Simon has scheduled a Maths exam for the Spring Bank Holiday Monday…). He is rude, but with such charm you can’t help but like him (if you’re a reader), and his intelligence shines through. Most of the time. He is only 16, after all.

DI Singh was wise to give in – eventually – and listen to what Garvie had to say about Chloe. Garvie finds clues merely by sitting back and thinking logical thoughts. Let’s not mention his rather hands-on detecting.

I won’t tell you how it goes, except that my first instinct as to who dunnit was correct. But since it was a long and fun journey getting to the end, that’s neither here nor there.

Did I say I loved it?

This is a fun crime novel for young readers, especially if you are a little bit of an outsider like Darkus, and would like to be cleverer than everyone else. It’s very satisfying being really good at detecting.

It’s a family thing, this. Darkus has a detective father (never mind that Alan Knightley has been in a coma for four years) and takes after his dad, sharing his passion for odd cases. Rohan Gavin who wrote Knightley & Son, takes after his mother Jamila, who is pretty good at writing for children. This is his first book, and it is Darkus’s first real case.

People are behaving strangely in bookshops. They are buying the new must-have self-help book The Code, and afterwards surprisingly many of them commit a crime of some kind. Knightley Sr wakes up from his coma and jumps straight into this mystery, and because Darkus has spent the last few years reading up on his dad’s old cases, he’s the perfect assistant.

The plot is about as believeable as the other Sherlocks’ and as fun. Particularly for young readers who might not be so familiar with the Conan Doyle version as they are with Benedict Cumberbatch’s on television. In turn hilarious and a bit scary, it’s a good adventure.

Along with the detective duo you get a slightly crazy Scottish policeman, a Polish housekeeper (very handy at all sorts of things), a clever stepsister and a raving loony stepfather. There are cars. Tube trains.

Something tells me the tweed-clad Knightleys will be back.

Because if they had – either of the above – today’s teenagers wouldn’t need to sit there and watch Sherlock on television, hearts in their mouths, ‘in case he dies.’ Honestly!

Or could it be they didn’t watch in the company of their parents, and if so, where were they? It’s gratifying that teenagers want to watch the Steven Moffat & Mark Gatiss Sherlock. All is not lost. But surely parents would want to watch as well? And wouldn’t they be aware that Sherlock Holmes didn’t die that time? Even if they hadn’t read the books.

It’s all my fault for being friends on facebook with someone young. It’s where I learned that they really thought Sherlock might pop his clogs forever. Maybe I’m wrong in watching the same programmes as Offspring? Worse, I gave Son the ten volume Sherlock Holmes collection quite a few years ago.

Back to the weekend’s television. Even Daughter knew he wouldn’t die. (Sorry for any spoilers, btw.) The Resident IT Consultant and I were slightly disappointed when Sherlock was seen to be less than dead at the end, having hoped that a few people might be left on a cliffhanger. Just didn’t expect the potential cliffhangers-on to be quite as many.

So, just as well Benedict Cumberbatch was seen to be with us still, or we could have had a massive bout of teen tears. I’m reminded of the Colin Firth Pride and Prejudice, where viewers were surprised to learn they could read the book and find out the ‘would they or wouldn’t they’ in advance of the next Sunday.

Did the – more general – reading of Sherlock Holmes end with my generation? Or is it simply that today’s teenagers don’t actually discuss Sherlock with their ancient parents? In fact, the parents might have assumed the children already knew the Holmes story.

The thing is, unlike some classics, Sir Arthur Conan Doyle’s stories aren’t hard to read. Quite user friendly, really. And the Resident IT Consultant and I found that we had both happened to read The Return of Sherlock Holmes before the book where he ‘died.’ Which was confusing, but you can manage if you need to.

Do girls read Sherlock Holmes these days? I don’t want to be sexist, but am thinking of all the pink books I see. Does anyone young read Sherlock Holmes, apart from my own absolutely perfect Offspring? I used to love the books as a child, and I’m sure I would have loved these new stories, as well.

There’s something about Victorian London and crime. The fog. The cabs. The cockneys, and so on. I last moved in this neighbourhood with Philip Pullman. Both Sally Lockhart and The New Cut Gang have the flavour of Sherlock Holmes. And so does this series about Holmes’ Baker Street Boys by Anthony Read. Obviously, as the term is Holmes’ own. Or should that be Conan Doyle?

Anyway, this is great stuff for those who like Victorian crime. I would also hope that new readers can be persuaded to discover this genre, fantasy and pink books notwithstanding.

There’s a new, fifth book in the series, The Stolen Sparklers. The earlier titles are The Disappearing Detective, The Case of the Captive Clairvoyant, The Ranjipur Ruby and The Limehouse Laundry. The titles all feel so satisfyingly Victorian crimey. And the covers have all the mystery and charm that I expect from this kind of book.

I believe Anthony has a long past in television writing. The Baker Street Boys are crying out to be captured on film. Something for Christmas television, perhaps?

This would be a good place to start a love affair with Holmes, figuratively speaking. The books are best for young readers, because there isn’t enough substance for us oldies. There are also some minor details that jar, because they feel a little modern, but I doubt that young readers would notice. More books like these, please.