Summer of My German Soldier

It became necessary to take plenty of breaks. Usually this is a sign of a not very captivating book, but with Bette Greene’s Summer of My German Soldier, it was imperative not to read too much in one go, and not because I wanted the book to last longer, either. It was ‘just’ too strong stuff. I needed to brace myself, somehow.

I’d already forgotten that that is what Lucy Mangan says in her Bookworm memoir; ‘when I reread it now, I have to put it down every few pages and walk around for a bit to let it all bed down before I am ready for the next chapter.’ Because it was on her recommendation that I bought a second hand copy of the book. 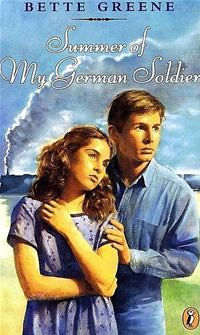 And if I only have one of her favourites, this has to be the one. Rarely have I come across anything quite like this WWII story about a 12-year-old Jewish girl in Arkansas, who ends up sheltering an escaped German soldier.

Patty is an unusual girl, not loved by her family, but very intelligent, except perhaps when it comes to understanding when not to say some things. Beaten often by her father, it’s hardly surprising she laps up the kindness and politeness Anton Reiker has to offer. They have intellectual conversations and Patty learns about his home in Göttingen.

You know this can’t end well, and it doesn’t. But this must be the best really bad ending to a children’s novel I’ve ever read. Whether I could have coped with reading it in my early teens is another question entirely. Probably not, would be my guess.

Written thirty years after it’s set, I don’t know if Bette describes the American south correctly, but it does feel like it. German soldiers were obviously bad. So were Jews, and also all black people, whose job it was to clean and cook for everyone else. There is unexpected goodness in places, but otherwise this is harsh.

If it was difficult to read for any length of time, then it is harder still to work out what to read next.

I suppose I could reread it…

A thought for our time

Before we look too deeply into our mince pies, I want to share the quote Lucy Mangan shares in her Bookworm. It’s from one of her ‘older’ children’s books, Summer of my German Soldier, by Bette Greene.

Set in the American deep south, the quote comes from a [hidden] German soldier, who’s made friends with a young Jewish girl, and his explanation of ‘how Hitler succeeded is still my go-to reference as I’m reading the headlines about the rise of whichever new (or ancient) evil is dominating the news cycle that day.

“His first layer is an undeniable truth, such as: the German worker is poor. The second layer is divided equally between flattery and truth: the German worker deserves to be prosperous. The third layer is total fabrication: the Jews and the Communists have stolen what is rightfully yours.”

Evil builds in increments. Your understanding of this basic truth may grow in sophistication and detail over the years, but the earlier and harder you grasp the simple, unchanging bastard fundamental, the better off you’ll be.’

Needless to say, I want to read this book.