I had to agree with the facebook friend who pointed out yesterday that she wasn’t at all jealous of those of her ‘criminal’ friends who are currently in Bristol, enjoying the 10th CrimeFest. She obviously didn’t mean it. We’d both like to be there. Maybe not kill to be there, but severe jealousy is a painful thing.

One of my American colleagues is there, again, and has been ever since he first sat on ‘my’ chair the year after I went. Which is now nine years ago, and I’d not have believed it could – would – be that long. (That’s [not] me on the left. As you can see.) 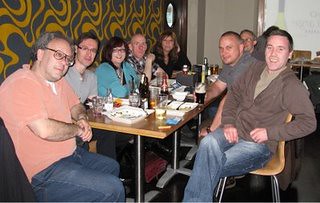 And the funny thing is, the less time I have to read adult crime novels, the more I feel like a fraud for even wanting to be there. ‘I won’t know anyone,’ I tell myself. But looked at realistically, I must know many more people than I did in 2008. I suppose I just threw myself right into things then, with my youthful energy, and now I sit here in my dotage, doubting my criminal credentials.

It’s so long ago that I even used the word Ceefax in a blog post the same month! I know because I went back and looked, to remind myself of Bristol. I have promised myself countless times to really try to go back ‘next year.’ I suppose the best thing would be if I could book right now, long before I know what I will or won’t be doing in May 2018.

In 2008 I made the rash decision to go, when discovering that my Irish colleague Declan Burke was going. Just like that. Have I become responsible? No, actually, I haven’t. I just caught a glimpse of the dates for Bouchercon, and almost saw myself in Toronto in October.

This will not do! Bloody Scotland is a short walk away. Much more convenient.

Neither present nor correct

Having planned for almost a year to attend the third Scarefest in Crosby, I ended up not going at all, so missed seeing and hearing the charming Barry Hutchison, Curtis Jobling, David Gatward, Jon Mayhew, Joseph Delaney, Philip Caveney, Ruth Symes and Tommy Donbavand. Formby Books had organised a whole Saturday of horrible things for the young and innocent, and I’m so sorry not have been able to drag myself there.

Hmm, that’s not all of them. Perhaps a few perished early? Oh well. I know the feeling.

There is a certain something about late September and early October. Book festivals. You couldn’t go to them all even if you wanted to. Actually, maybe you could, if you’re happy with a day here and a day there. I’m so greedy that I expect to ‘go for a while.’

What I am currently not doing is roaming around Cheltenham. But oh how I wish I were. They have some interesting people on offer this year. Even J K Rowling is there. And whatever you say, she is a writer first. Many of the other tempting names are celebrities first. Actors who have written a book. Television presenters. Politicians. But is is tempting. Benedict Cumberbatch. As I said, tempting.

I have missed Bath, and Wigtown, and I have a feeling I am in the midst of missing Bouchercon in Cleveland. Luckily Peter Rozovsky is doing his duty and posting daily, by the looks of it. Dead Guy has someone there, as well. Facebook (there it goes again…) has offered up countless photos of people posing with their favourite crime writer. One day I will do that too. If I was the type to pose with authors, which I’m not, unless it’s done under duress. Stephen Booth is doing an event called Murder in the Great Outdoors, and that just sounds so frightfully healthy, don’t you think?

And so is, to some extent, the non-attendance at countless festivals. Rest. Sleep…

PS It was only poor Curtis who didn’t make it through the evening. In fact, he didn’t make it at all. And Ruth Symes who had an early pumpkin arrangement.

It’s Bouchercon weekend, and I’ve discovered that I’m not in San Francisco. Oh well. I daydreamed about it a little, but that was over 15 months ago. I think it was the fact that it’s San Francisco. Or maybe just that they’ve made the heading on the website look so seductive? But compared with CrimeFest in good old Bristol, the hotel cost rather more. I’ve glanced a little at the list of attendees, but only sort of sideways, because I don’t want to go all green. (Even the Resident IT Consultant has been to SF, and he’s not been to that many places.)

Seeing as I’m at home instead, I should turn my thoughts to that very home. I’ve read that books are in, which is good because mine are very much in. The way, everywhere. But at least I’m fashionable for the next few months until ‘they’ decide books are out again. Seen but not heard. No, that doesn’t work. Have them, but not see them.

Eagle-eyed readers may have noticed that Derek Landy’s fans are still debating that Skulduggery Pleasant film. The one that it seems will no longer happen, and that Derek hopes will never happen. There is an interview with him in the International Business Times.

Other young readers have their say in the Guardian Education where the young critics’ competition results were published this week. Children read the longlisted books for the Guardian prize and wrote a review. As usual they have good opinions on books and reading. And I’m glad there is somewhere they can do this.

And finally, I can make use of this space to wish Meg Rosoff a happy birthday. I wouldn’t have heard of her and How I Live Now had it not been for the above competition. Six years ago, that was. I still haven’t got over the fact that she doesn’t have long hair. Maybe I never quite left San Francisco of the late 1960s. Americans don’t of necessity have to have long hair. Nor does it make for better books. At least, I don’t think so. Happy Birthday, Meg!