The Story of Paintings

There is so much beautiful art in this book on History of Art for Children, that at first I didn’t see Mick Manning or Brita Granström in there, and they are the ones who made the book.

I ought to be used to their style of educating children with the help of art and carefully researched facts, but still I saw only the classic art. And that’s perhaps as it should be.

From cave paintings to Jean-Michel Basquiat, it’s all there. The adult reader will not be surprised to see all the classic paintings, and this is a fine way for children to learn. 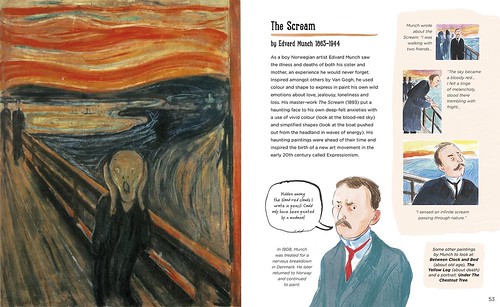 Each page has a work of art alongside information about the artist and then some of Brita’s drawings to show how the artist might have looked as he/she worked, and with individual comments that make each painting special.

There is a glossary at the end, explaining the bare minimum of arty words. Enough, but not so it gets boring.

Fantastic book and so beautiful to look at!

We Are All Born Free

‘If we are frightened of being badly treated in our own country, we all have the right to run away to another country to be safe.’

The above is a quote from We Are All Born Free, The Universal Declaration of Human Rights in Pictures, where you get the simplified version of our rights, accompanied by the most beautiful illustrations. This book isn’t new, but we have never needed it more. 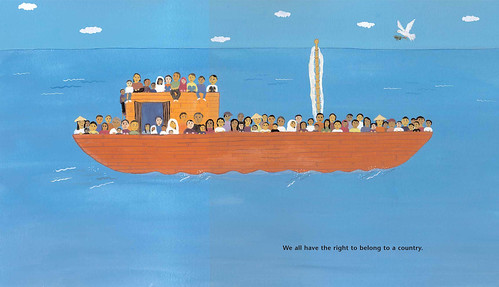 There is something about the simplified version that makes the truth about what this well known declaration is telling us really stand out. Our leaders would do well to read it. Many of them are most likely in favour of our rights, while conveniently forgetting to act as though they are. ‘We have a duty to other people, and we should protect their rights and freedoms.’

‘These rights belong to everybody, whatever our differences.’ 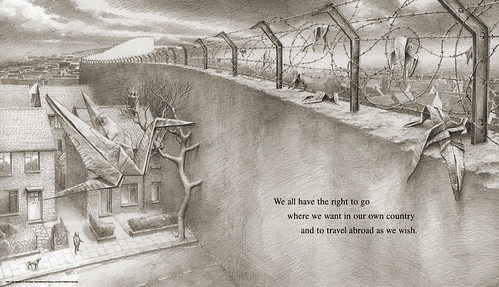 (The paperback of We Are All Born Free was published last year, and all royalties go to Amnesty International.)

Not sure if we lasted the whole night or if we gave up after a couple of hours. Such is my memory of the time my cousins and I put the tent up in our summer garden and planned to spend the night. Cold, damp and smelly I can remember. But it’s the planning and doing that’s the fun. Doesn’t matter if it’s totally successful.

I just read in a magazine that nature is the new religion for Swedes, and I can well believe it. I like to be near the sea as well as the next witch, but draw the line at forests. Some people actually like them.

Brita Granström was probably drawing on her Swedish nature memories when drawing her latest book, Wild Adventures, with her husband Mick Manning. ‘Look, make, explore – in nature’s playground’ is what they call it. And it’s definitely got enough ideas to last several school holidays, always assuming your parents either play with you, or let you be indpendent, playing in nature on your own, the way it used to be.

It’s all about putting up tents and other shelters, and finding and using everything out there. Personally I’m keener on nettle soup than I am on frogs’ skulls. Mick and Brita tell the reader about sounds and smells and tracks and what you can eat and how you cook out in the wild, and anything else you could conceivably want to do.

I’m very relieved we had no such book when Offspring were small, or there would have been no peace.

In Sarah Garland’s latest book about Eddie and his family they actually go camping. Eddie’s Tent and How to go Camping also has rules and instructions for how to holiday in nature, enjoying it while not destroying it. 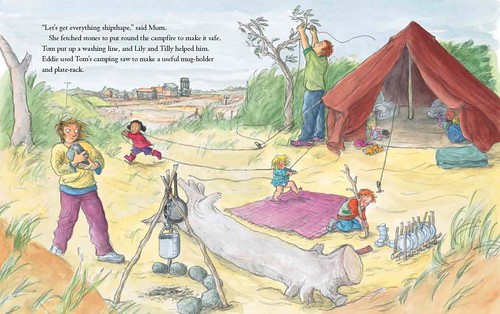 It’s a lovely book, but I’m glad I’m not Eddie’s poor mother, who simply has to go on with the mothering she always does, but in harder conditions. Tom plays at cooking and making fires, but a mother’s work is always the same, except when it’s worse.

Eddie and the girls love it, however, and they make friends and they have fun and they learn to fish, and to eat fish. It’s all pretty wonderful, once they have braved the motorway jams to get there. It’s the stuff dreams are made of. As long as you are not a mother.

I’m sure mine realised early on that I wouldn’t last long in that tent. I suspect it was the same old tent she had used when she was young too.

Hanging out with Shakespeare

Just as I did with Dickens, I have now got to know William Shakespeare a bit better. It’s a funny thing with Shakespeare; we all of us ‘know’ him so well, except we don’t necessarily. We go and see his plays, maybe read a sonnet, and perhaps visit Stratford or The Globe.

As with Dickens my introduction comes via Brita Granström and Mick Manning, who do this so well. Mick, I assume, reads up on the person, and Brita then gets going on illustrating that person’s life. With Shakespeare I imagine it will have been harder, because we don’t actually know all that much.

Part of William Shakespeare, Scenes from the life of the world’s greatest writer, is supposition. Someone has to make an educated guess as to what Will did or where he went and how things happened. But this is good guesswork.

Having seen what Will’s childhood might have been like, and his siblings, and hearing about him – possibly – carving his initials on his school desk, makes him come alive. Learning what he learned at school makes it easier to see where his plays came from.

And speaking of plays, they are here in this book. Not all of them, but many of his best known dramas, complete with summaries of what happens in them, with illustrations.

These books by Brita and Mick are better than any other way I can think of to learn about people. They may be famous, but not so much that we can’t learn more about them. Give me the illustrated childhood of anyone and I’ll feel as if we are old friends.

You certainly feel your age when Offspring come home from school, tasked to enquire whether their parents were alive when The Beatles were around. Does it make you very old? Or is it merely that teachers have grown disproportionately young? The one who asked this was actually very nice, and a good teacher. Nevertheless, I felt ancient. (Since when does pop music belong in history lessons?)

Because, yes, I was around, back when.

It doesn’t mean I know, or remember, every fact about The Fab Four, but I do recall the general feel of the era. Although I need to point out I was obviously very young when all this happened. Ahem. To prove it I can tell you I had to rely on Mother-of-witch to read what the newspapers wrote about the long-haired Liverpool lads.

For Christmas 1963 I was given a record player, and my first record, She Loves You. The Aunts disapproved of all this foreign stuff. After all, there were people around who sang in a language you could understand. But I sang happily along to She Loves You and all the others, without having any idea of what they, and I, were singing about.

Now my fellow countrywoman Brita Granström and her husband Mick Manning have produced a very nice illustrated reference book on The Beatles. I have learned things I didn’t know before. I have been reminded of what was so special about John, Paul, George and Ringo. And I remembered why I half ditched them in the end.

Brita’s pictures tell more of a story than words do, and together she and Mick have made a fab book about what came before The Beatles made it big 50 years ago, what happened once they did, and how it all ended. I know more now about their early lives (including getting some unexpected help with a quiz question I came across the same day I read the book), and I properly understand how the haircut came to be. I’ve even had a new and better explanation to their name.

Whether you’re the right side of 50, or just ten and wondering who The Beatles really were, this is the book for you. I happen to have a good friend who likes all things Beatles. I will not be passing my copy on to him.

Just thought I’d mention that. He can buy his own.

The Secrets of Stonehenge

Let’s face it. I didn’t pay enough attention during history lessons at school. And what I did catch, I soon forgot. I’m a disgrace.

But I think I will actually remember what I’ve learned about Stonehenge from now on. That’s because Brita Granström and Mick Manning have done again what they do so well. They find a topic and then they find out all there is to know about it, after which they make a deceptively simple non-fiction picture book about whatever it is.

This time it’s Stonehenge, which also feels rather topical, considering the summer solstice has just been. They might have banned the ‘crazy hippies’ from Stonehenge these days, but its significance has not lessened.

In their book The Secrets of Stonehenge Mick and Brita show us quite how enormous those stones are (I haven’t been. I really must go and see for myself.) and how big a job it must have been to get them all there. And like many big jobs, it’s not just the thing itself that needed a lot of people. The men who put those stones there needed to be fed and watered and housed and clothed, and probably for longer than a weekend.

I suppose I’d like to know why they really went to all that trouble, all those thousands of years ago, but we can’t ask them, and they didn’t exactly leave a diary behind to explain their giant stone Lego.

But it is fascinating. And they did leave us the stones.

I said I wasn’t going to ‘do Dickens.’ The 200th celebrations have been plentiful without me. But I couldn’t resist this ‘picture book’ by Brita Granström and Mick Manning. I have learned more from their brief, non-fiction book than I would from most longer and perhaps ‘worthier’ works. Possibly because I tend to switch off after a while, and this was just the right length.

Charles Dickens, Scenes From An Extraordinary Life contains the bare bones of facts while depicting the life of Dickens in great detailed drawings, sometimes cartoon style. A picture really can replace a lot of words.

The reader follows Dickens from when he was a very noisy baby all the way to his funeral 58 years later. And because his life is shown like this, you can stop and say to yourself, ‘that’s rather like it was in [insert title of Dickens novel],’ and you realise how he got some of his ideas.

And once you’ve had that thought, there is a short cartoon style summary of the very novel you had in mind. And whether you’ve not read it or have difficulty remembering just how it went, well, don’t expect to get it here! Just enough to get you interested, at which point you’re told to go read the book. So only a shortcut to tell you about it. Not a shortcut to reading the novel. No cheating.

I’d like to think that any young reader who knew nothing about Dickens, or who thought he’d be a boring old man, will most likely want to start on their own first Dickens, about Oliver or Nicholas or Martin. Or any of the others.

I could get used to this kind of book; a brief wiki in pictures. Let Brita and Mick do all the hard work. Let me enjoy.