A report from the pavement

I spent quite a bit of my Bloody Scotland weekend trying to hunt Elly Griffiths down. This entailed looking into bars; a thing I don’t normally do. I wanted her to sign a book, but by the time I had the book, Elly was nowhere to be found.

She was one of the crime writers taking part in Vaseem and Abir’s Red Hot Night of a Million Games. It was a very silly night, but a lot of fun, and it cheered both Daughter and me up. We’ll go next year too if it’s on. Daughter’s favourite was Luca Veste singing Hit Me Baby One More Time. Again. We got to wave our lit-up mobiles in the air and everything. Elly did some good moves with her maracas. Helen Fitzgerald played a convincing corpse on the floor. There was much cheating.

And when all’s said and done, it has very little to do with crime fiction, except that these authors are fun to spend time with.

In Houses From Hell, all I wanted to do was move the furniture on the stage around. Lovely, tartan armchairs, but Helen Grant, Lesley Thomson and Stuart Neville didn’t get to interact enough, because they were not seated in a convenient semi-circle. (Please take note!) Besides that, between you and me, they are quite creepy people. No, that’s not right. They have creepy interests and they put all sorts into their books. Helen even managed to scare her own husband.

When the programme for Bloody Scotland came I wanted to go to so many events. But I know my [lack of] strength, so decided to pace myself, and opted for four, thinking I could add to them later. When the time came, however, four seemed like really quite enough.

After many years of not meeting Martin Edwards in person, there was no way I was going to miss his Cosy Makes a Comeback event. I think of him as a cosy writer. And then he started off by saying he prefers traditional; not cosy. Conveniently enough both the other participants, Jonathan Whitelaw and S J Bennett, as well as the audience, were quick to adapt and the word traditional got a lot of airing. Big audience, too, so I have to say that we are many who like cosy crime. Pardon, traditional.

Hadn’t been sure how the death of the Queen was going to influence the discussion, seeing as S J’s detective actually is the Queen. But she has many plans, and always lets fictional characters do the actual deeds, so this may well continue working. Martin’s excellence at editing [other people’s] vintage crime got a mention, with very many of us being big fans and wanting to know that there will be more from the British Library. He’d initially expected to edit two. There are now over a hundred, so that clearly exceeded expectations.

At the cosy event (sorry!) I said hello to Lizzy Siddal, who I now recognised, and was introduced to her companion Marina Sofia. This turned out to be serendipitous since Marina bore down on me outside the room for the evening event about Detective Duos. We exchanged cards, the way civilised people do, and talked. A lot. For obvious reasons we were able to talk about funny foreigners. Marina is a publisher of translated crime. When Son arrived, in his role as translator of David Lagercrantz’s book, I introduced them, and it turned out they knew about each other already, and a lot more conversation took place.

The Detective Duos event was interesting, and I was pleased to finally come across Ayo Onatade who chaired it. Must have been aware of her for ten years at least. And I had thought it was her I saw down at the Albert Halls the previous night. It obviously was.

One day I’ll have to explain to David Lagercrantz about spoilers. Like not mentioning them too much at events… I liked new-to-me author Ajay Chowdhury, who is a Bloody Scotland-made success, having won a competition to write new crime. Having decided against buying his book before the event on the grounds that it was a hardback, I hurried out afterwards to hand over my money, and still make it to be first in the signing queue.

Simon Mason talked about his two DI R Wilkinses, and if I’d not already read and loved his book, I’d have bought that too. At the end Ayo put them all on the spot, and David agonised at great length before giving up on answering. (In case you want to know what it was about, I’m afraid I can’t remember.) When asked about their personal favourite detective duos, I was very pleased that Ajay chose Nero Wolfe and Archie Goodwin. Haven’t heard those names mentioned in a long time.

I then proceeded to confuse everyone by chatting to Simon and David at more or less the same time at the signing table, about different things in two different languages. I think maybe I won’t do that again. But it was nice to reminisce a little with Simon, and good to introduce myself as the mother of you-know-who to David, who got quite carried away. And he finally got to meet his translator. So I suppose that was all good.

Afterwards Son and Dodo and the Resident IT Consultant went for a beer somewhere. Probably not where I was looking for Elly. Instead I hugged an author and talked about cows with another while I waited outside on the pavement for Daughter to pick me up. It’s quite nice this, finding yourself right next to some favourite writers on the pavement (where many of them go to smoke. But not these two!).

As you may have guessed the cow conversation was with James Oswald, which in turn started Vaseem Khan on the Scots use of the word coo. I worked out later that they might have been on their way to Crime at the Coo. Talked elephants with Vaseem. Obviously. And said what fun we’d had the previous night. Soon after the hug Daughter turned up and she tried to invite him round for chilli. Vaseem turned us down very nicely. But we can try again next year.

So, as I said, you find a lot of authors milling about both in and out of the Golden Lion. And when the ticket table remained unstaffed for rather longer than it should have, Gordon Brown came to the rescue. 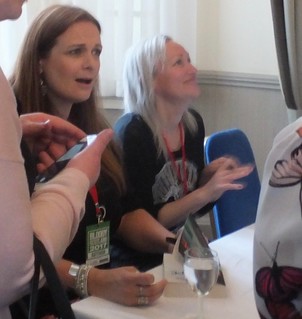 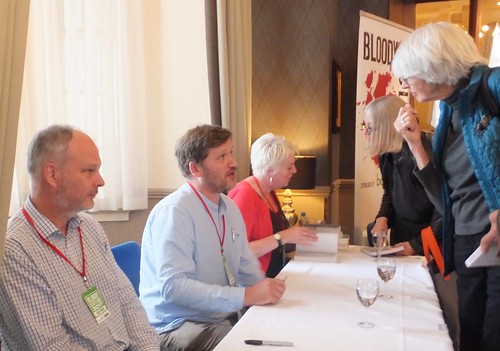 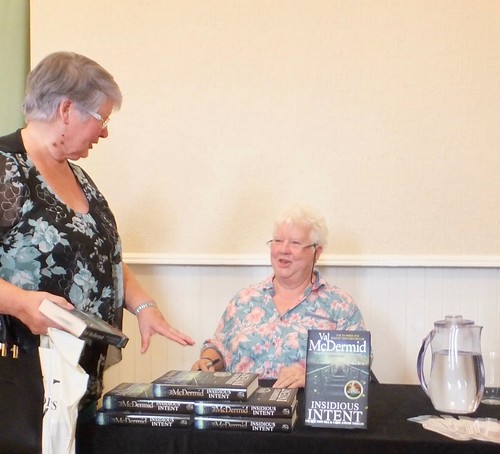 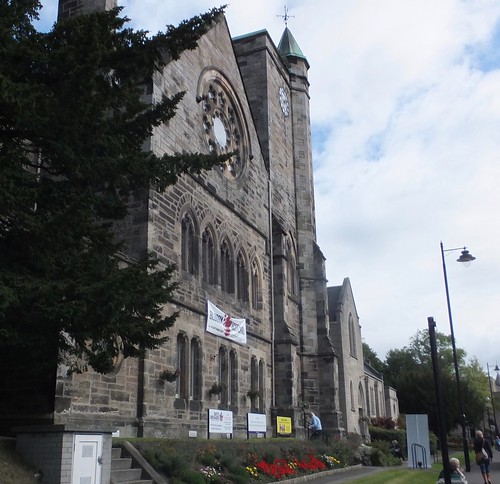 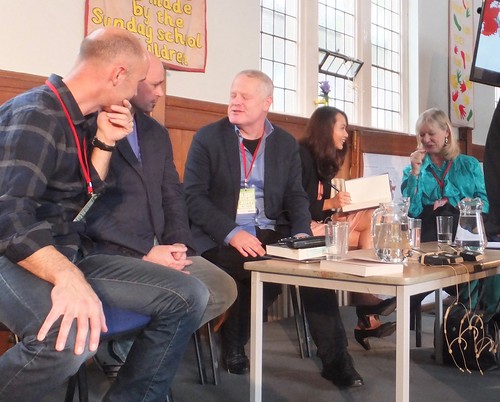