How would you feel about having a luxurious weekend at a hotel in the Scottish countryside, hanging out not only with likeminded people who want to learn to write better, but with the authors who are there to give talks on how to learn?

Yeah, I know. Me too. It sounds lovely.

The Society of Authors is organising a weekend at the end of September, at a hotel not too far from me. ScotsWrite at the Westerwood Hotel seems like a most worthwhile couple of days.

You know how it is. You read the programme and you try to decide what you’d choose if you were going. Well, I’ve done that. Tried, I mean.

Joanne Harris as keynote speaker with dinner the first night… In fact, when I’d got that far I wasn’t sure how they could better that offer.

But Saturday manages to look pretty good too. Denise Mina for a session in the morning. Except, well, at the same time there is Daniel Hahn and Ruth Martin talking translations. So that would have to be me.

Then another keynote talk just before lunch from Charlie Higson. They know how to keep those ravenous writers under control. And after lunch the not so easy choice of science fiction, how to charm a publisher, or ergonomic workspaces with Caro Ramsay. I’m so charming already, that it’d be a toss-up between sitting nicely or hearing about science fiction.

Before coffee there is no question but going for Emily Dodd and Celia Rees. For me, I mean. If I go. If I can. And between the coffee and the gin tasting (yes, really) a debate with Joanne Harris, Sam Eades and John Jarrold.

After which free time might well be required as there is dinner and a ceilidh before the day is over.

Sunday morning – after breakfast and Tai Chi – we have Joanna Penn talking about How to Make a Living with your Writing, followed by mental health for writers, graphic novels, commissioning, writing for radio and television, children’s books, poetry, plus some insider secrets before you go home.

Well, that sounds all right, doesn’t it?

I must clarify that that is not a severed head you can see on top of the contraption of unidentifiable stuff [not whisky, either, as I thought]. Launching Book Week Scotland is not that gruesome. It’s much more at the civilised end, which is how I came to eat gluten free grey cake and drink iced coffee from a jam jar.

(The severed head, or not, was part of a smelling toy, where you would go round and sniff the various smells bottled in the contraption.) 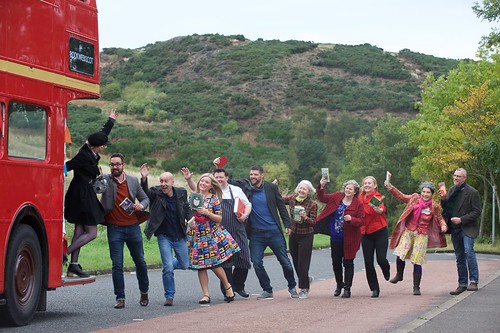 Earlier yesterday morning Scottish Book Trust had driven ten authors somewhere out towards the back of Arthur’s Seat in a double decker bus, and photographers were invited to traipse round for fun photographs. It all seemed too complicated of a morning for me, which is why I am using the official pictures. You can tell they had fun. 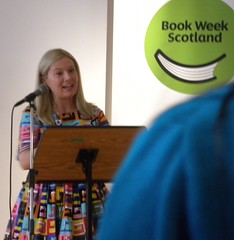 After that I failed to take a single usable photo of all the speakers who had interesting things to say about reading and books and Book Week Scotland. But Pamela Butchart’s dress is so fantastic that here she is anyway, only slightly blurred. Her challenge to us – I think – was to read a picture book a day. And, it’s actually something that is fully doable, and I will consider it. 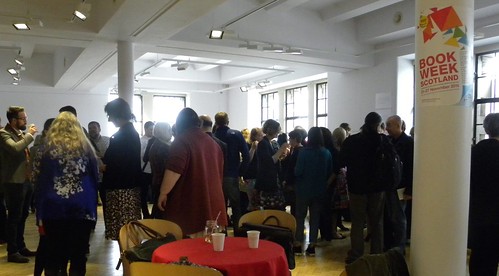 Graeme Macrae Burnet does not recommend giving people a copy of the biography of Dostoyevsky (1000p+) which he was given last year. Instead he read us three – extremely short – novels. He wants us to go up to perfect strangers and read them something we like. As if!

And Caro Ramsay is thoroughly into The Hitchhiker’s Guide to the Galaxy, which I can’t disapprove of in the slightest. Let’s not panic. 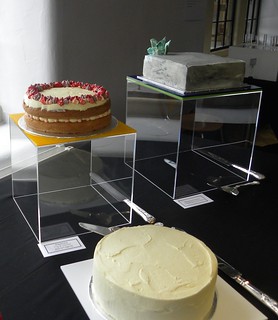 Marc Lambert of Scottish Book Trust spoke and so did Culture Minister Fiona Hyslop. It’s good when Governments support books and reading, and as in previous years (I think they said this is the fifth) there is a lot of programme waiting for Book Week Scotland to break out, which it will do on November 21st. For a week, obviously. 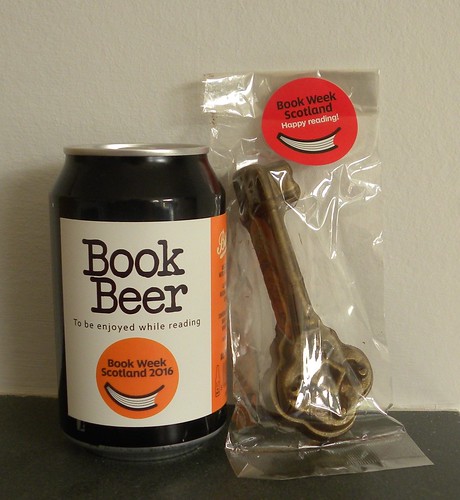 My party bag contained a book beer, and a chocolate key, so not even the Resident IT Consultant will have to go without. 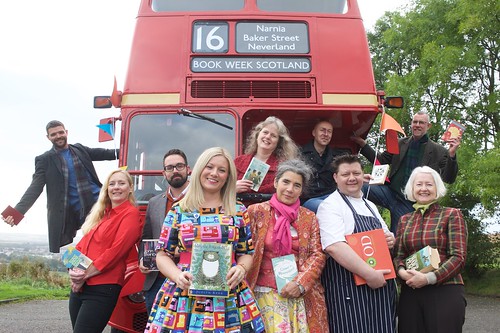 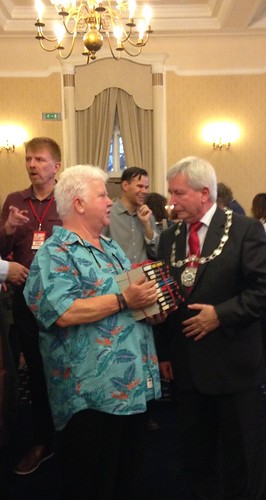 We don’t kill using tropical fish, or even curare, in Scotland. Murder wants to be less outlandish. More the way William McIlvanney killed. More Scottish. That’s why Bloody Scotland renamed their crime award after the late, much admired and loved, crime writer.

His brother Hugh was at the opening celebrations at the Golden Lion last night, along with our host Provost Mike Robbins and most of the authors who are in Stirling for another bloody weekend.

Robert Burns had been there too, but not all that recently, I understand. 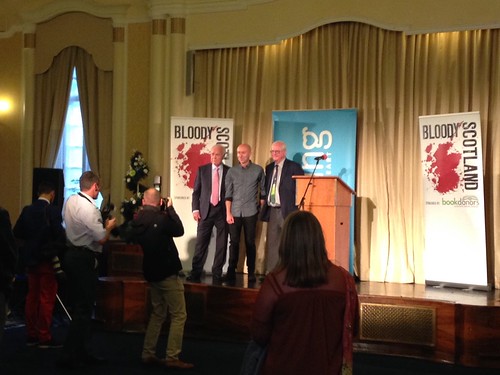 There were various speeches before Chris Brookmyre was announced winner of this year’s prize. This nice man – who is always shorter than I expect him to be – was photographed, and then came and lay his prize at my feet as he was interviewed on camera right in front of me. 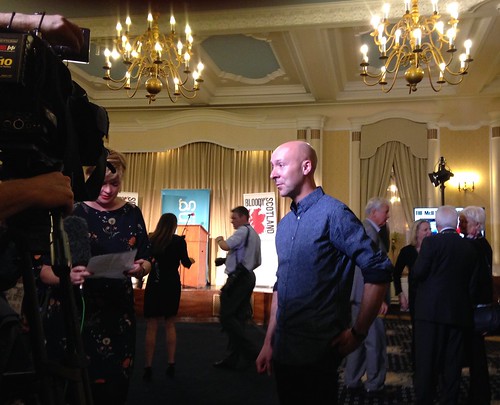 The longlisted authors were corralled into a line in front of the stage, and it almost worked. There’s always one not quite in the right place. The shortlisted ones were clutching their prizes, the complete works of William McIlvanney. 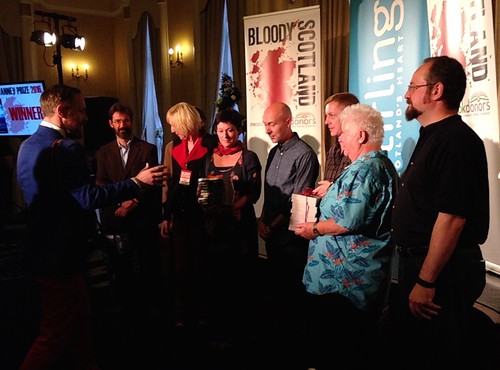 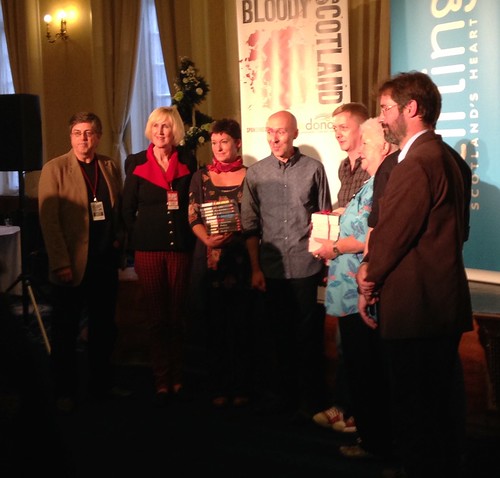 I avoided the haggis canapés, looking to see where the promised veggie ones might be, but gave up. (I had a sandwich in my bag.) Picked up my free ticket to go and see Stuart MacBride and Caro Ramsay at the Albert Halls, and discovered that it is indeed only five minutes there, even for me. I thought they’d lied. 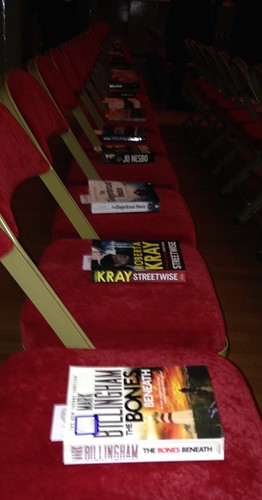 There was a free book on every seat, donated by Bloody Scotland sponsors BookDonors. I was about to scout around for the most interesting one, when I realised ‘my’ seat came with a Paul Temple, and you can’t improve on that. Had to sit next to a Jeffrey Archer however.

Stuart and Caro arrived on stage promising a shambles, which I have to say they managed to deliver. Caro brought a book, in case she got bored. I did too. She brandished a traffic sign to be used in case of spoilers, mentioned something about someone not drinking. And there were rats.

I only took one, very poor, picture, because I discovered my stupid mobile has a flash. And that’s not good.

They argued about their first meeting, which might have been about sex, drugs and rock’n’roll. Or not. If it was in Harrogate, then it wasn’t Caro. There was some running back and forth, dog style, possibly for a reason. Worst reviews brought out some interesting ones, and they discussed whether they post reviews of their own books on Amazon.

From Googling herself, Caro knows she speaks Swedish, which caused some problems when required to actually speak it. Stuart offered a Swedish Chef impersonation. He’s a man who never plans, and he certainly won’t tell anyone the best place in Aberdeen to hide a body.

In Glasgow they kill with sarcasm, not guns. And I didn’t quite catch the issues with horse meat and butchers. There was a soaking cat, somewhere, unless it was stroaking a cat.

Yeah, so that was the first bloody evening. 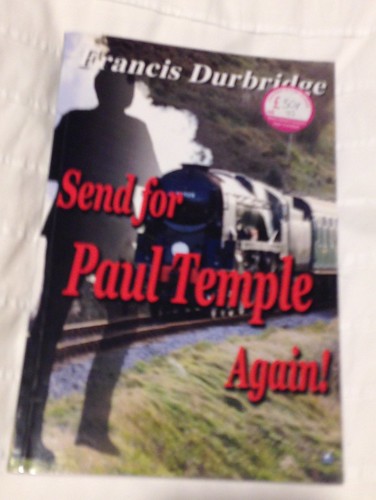 The Bookbug Week‘s flagship event will this year take place only a mile or so away from Bookwitch Towers. Scottish Book Trust’s annual book week for young readers runs from May 16th for a week, kicking off at Bannockburn with a day of, I think, poetry and stuff. 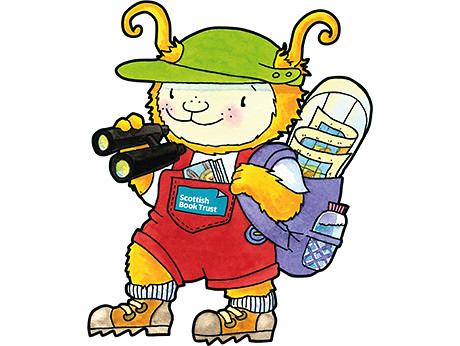 The rest of the programme happens all over Scotland, and the theme this year is international. Songs and rhymes from around the world.

This tallies with what you find in the programme for Stirling’s own Off the Page where, surprisingly, they offer both a German Bookbug session, as well as a bilingual event or two.

You can also do colouring in and design your own coat of arms, along with attending a teddy bear’s picnic. At the other end of the age scale (or so I imagine) is a vintage reminiscence tea party, which sounds really very nice. Except I hope I am not old enough for that sort of thing yet.

Somewhere there are dragons.

In schools (they have all the luck!) you might find Chae Strathie, Janis Mackay, Kirkland Ciccone, Alex Nye, Ross MacKenzie and Mairi Hedderwick.

But despair not, Mairi Hedderwick is also doing a public event. Maybe even two. This ten-day long festival starts on May 6th, and other public children’s events offer Lari Don and Nick Sharratt.

Helen MacKinven, whom I met at Yay!YA+ last week is also doing an event. As are several of the big names in Scottish crime, such as Lin Anderson, Helen Fitzgerald, Denise Mina and Caro Ramsay.

There are many more events and many more authors. And much upset on my part because I will not be going to any of these… The more attractive the event, the less convenient the date (for me).