No Ballet Shoes in Syria

Do you like Ballet Shoes? And When Hitler Stole Pink Rabbit? Then you will love Catherine Bruton’s No Ballet Shoes in Syria. 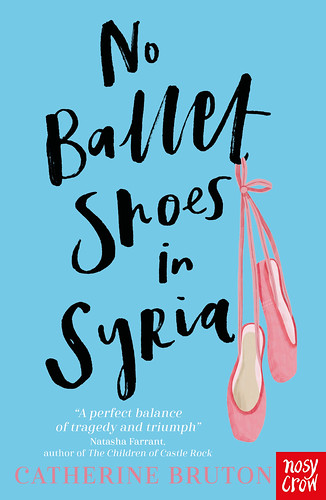 Aya is eleven and has arrived in Britain with her mother and her little brother Moosa. They’ve been here three weeks and queue most days just to see their caseworker and to get food and nappies. Her mother speaks very little English, and is not well. It falls to Aya to do the talking, and the looking after.

At the community centre somewhere in Manchester Aya suddenly hears music, and feels compelled to see where it is coming from. This is how she discovers a ballet class, and having loved her ballet classes back in Aleppo she is drawn to the room.

But can someone like her ever dance here in England?

Set mostly in Manchester, there are flashbacks to Aya’s story of what happened in Syria, and how she and her family ended up in England. Most of her family. In a way it’s the standard refugee tale, but every such story has real individuals in it, and this is Aya’s.

Catherine has got everything right here. It’s exciting, but reassuring. It’s sweet, but not too sweet. And we need to be reminded of all this right now. The dreadful past. The dreadful present. We need to make things better.

I hope you will love this book as much as I did.

I Predict a Riot

I’ll let you in on a secret. I read Catherine Bruton’s new book I Predict a Riot, completely the wrong way round. I was furious throughout the whole book. Don’t misunderstand me, it’s well written and the plot, inspired by the London riots, is very exciting indeed. But it begins with the end, where you are told what happened (and I supposed that was to make it more bearable), so I ‘knew’ what happened.

Except it didn’t. It was the other way round, making me stare at the ending, when it came properly, and wonder what on earth was going on? Was Catherine trying to trick her readers?

So, that little misunderstanding aside, this is a good way of looking at something that was in the news, but which many of us boringly well behaved people will have found hard to truly understand.

Set in London, in a mixed area, with poor and better off living close to each other, we have Maggie, the MP’s daughter, and two disadvantaged black boys, as well as the rather scary local gang. Maggie is filming everything she sees, possibly in an effort to forget about her real life.

Little Pea is a crazy boy who seems to be on everyone’s side, or none at all. You just can’t be sure. And there is Tokes, the outsider, who needs to stay away from trouble to save himself. They go round this part of London with Maggie and her film camera during a few hot days when everything is waiting to blow up, and then does.

For sheer excitement this is your book. Hopefully it will also teach readers to think about what’s important in their lives and how they would like to be judged by the rest of the world (preferably not as the famous gang leader who shows no mercy). And some parents could do with taking the side of their children, once in a while.