There will be a singing

That’s not just my continued mis-reading of the promised signing after every event. As I got off the tram on Saturday, I found myself struggling to avoid becoming part of a happy group of singers from the something or other gospel. I let them sway on ahead, but they gospelled so slowly that I ended up joining them, eventually overtaking whenever a more spacially aware singer prodded one of the others out of the way. And finally I led the procession, but I speeded up so I’d be out of there completely.

Tram? I hear you ask. Yes, I let the Resident IT Consultant drive me (us) to the Park & Ride and the tram conveyed me into Edinburgh. (It was Saturday. I wanted to make sure I didn’t suffer a repeat of the Saturday in 2012 when the train home was simply too full to join.)

I cased the joint for a while, coming to the conclusion the bookshop doesn’t stock Into A Raging Blaze. Found that the photographers’ background carpet was a more mellow green than it has been. Checked the price of cake – as you do – in case the Resident IT Consultant would need some later. And I, erm, rearranged some books in the bookshop. Although it is hard to put books face out when it is at the expense of other top books. Where is Dan Brown when you need him? 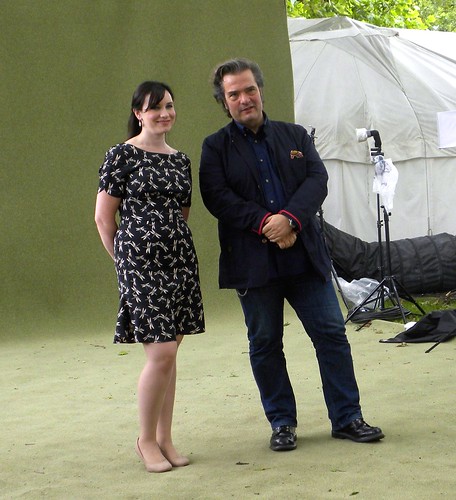 Joined the proper photographers to snap Charlie Fletcher and Michelle Harrison. Not unsurprisingly they were keenest on the beautiful Michelle (who reminded me of a black haired J K Rowling). Me, I sort of stood behind the dustbins. Which isn’t necessarily a bad place to be. Being short, I’d already come to the conclusion I might have to take photographs between the legs of the others who have this unwritten shooting order I will never ever be able to join. 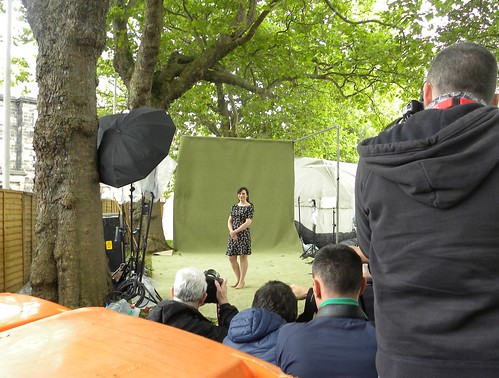 After Charlie’s and Michelle’s event I repaired to the press yurt and most serendipitously came face to face with the newlyweds. I had more or less given up hope of fitting Philip and Lady Caveney into our respective schedules this week. So we had all of several minutes before Philip’s interview (for television, he claims) and I dashed on to The Siobhan Dowd Trust Memorial Lecture, where I was unable to avoid the Resident IT Consultant. Former children’s laureate Anthony Browne was there too. 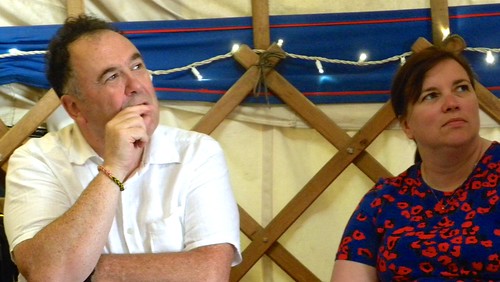 I had asked permission to bring the Resident IT Consultant to the yurt, so we went there for our dinner sandwiches, and the life saving coffee. Sat opposite a woman I slowly worked out must be a Swedish journalist, and even more slowly I worked out that she the man she was interviewing was Bernardo Atxaga (whose book Shola miraculously appeared in my Swedish letterbox over the winter).

Being on translating grounds here, I wasn’t altogether surprised to see Daniel Hahn, but I didn’t tug at his sleeve either, as he was intent on Bernardo. I trawled the square for some action and found I arrived just in time for the signing by Anne Plichota and Cendrine Wolf, who write the Oksa Pollock books. 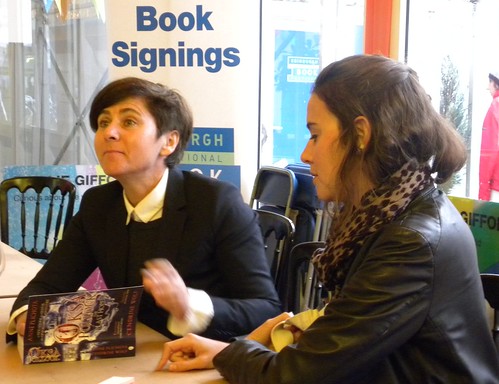 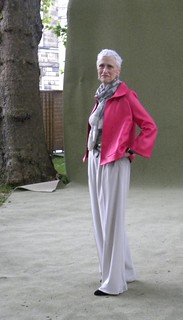 After some killing of time had taken place (it rained…) we finally got to the evening’s long awaited photocall with Sara Paretsky. She jumped straight into her star role, saying the attention she got from the photographers made her feel as though she’s important. Murdo Macleod pointed out she is important. I hung back by the dustbins again, knowing my camera would never totally overcome the fact that it was eight o’clock and a little dark, and that I couldn’t hope to achieve what Murdo and Co did. Meanwhile the Resident IT Consultant chatted to one of the photographers about why they all wear black. (I had no idea he was so into fashion!) 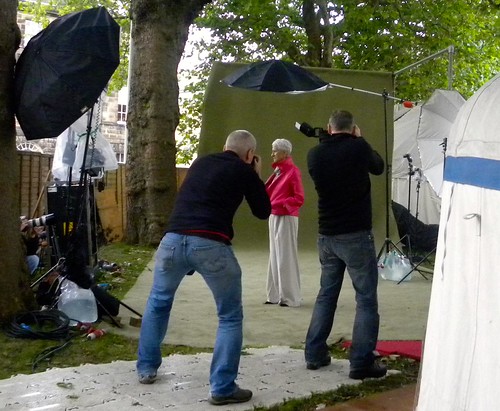 We went straight to Sara’s event with Tom Rob Smith who – it turns out – is half Swedish. Naturally. Not knowing what he looked like before last night, I did miss his photocall on the green carpet. Apologies. (He looks sort of Swedish, if that helps.)

My skills for getting to near the front of the singing, I mean signing, queue had not deserted me, and I had my two minutes with Sara before too long. We agreed that facebook is the way to keep track of house moves and dogs. And stuff.

The light was far too bad for pictures, so I led the Resident IT Consultant back to the tram stop with no more singing, and from there it was a smooth trip home, without any need to get too close to any fellow passengers.

(In the small hours leading up to Saturday I had dreamed an alternate Sara Paretsky signing. She and her many (?) publicists, as well as a large group of fans, turned up outside my – old – house, to do the signing. I invited them in for soup and sandwiches. Her and the PRs, not the fans, obviously. Once inside it became my new house and that was so not good, because of its unfinished state. Also, my freezer isn’t that well stocked yet, and I was busy working out how to make the small amount of soup I had stretch between so many. But other than that, it was a fine signing.)