All Aboard for the Bobo Road

It took me a little while to realise that this extremely colourful picture book featuring a bus trip somewhere in Africa, is actually a counting book. I am a bit slow, and was so mesmerised by the colours that I missed the counting of items that entered the bus. 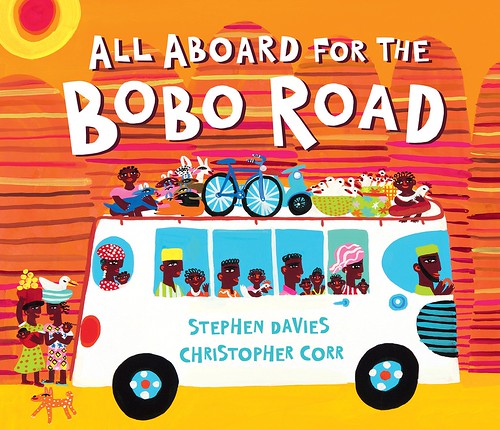 As is always the case with Stephen Davies and his picture books we are back in Africa, learning something of what people do in a particular area (I’m not sure exactly where).

Big Ali drives the bus from Banfora bus station to Bobo Road. His children Fatima and Galo are there too, sitting on the roof, helping load everything. The ‘wheels on the minibus go round’ and the children ride on the roof where the air feels fresher.

You see so much from the bus, and if my assumption that this is somewhere real is correct, then we see many interesting looking places. As well as the four cans of cooking oil and the five sacks of rice and…

On arrival everything has to be unloaded and counted again.

I like a place where the bus driver wears a lime green shirt and pink trousers!

(Christopher Corr is responsible for all the colour.)

Of milk and goats

These two picture books are filled with love. And by that I don’t only mean that Ali, Alu, Fati, Faruk, Halima, Talita and Zamp’s father has three wives. I rather imagine that could cause some discussion when you read to your young child. Or not. Children are sensible creatures.

Al Haji Amadu also has seven children (which you know, if you counted) and a number of animals (this is a great book for counting), the worst of which are the five goggle-eyed goats.

The Goggle-Eyed Goats – as the book is called – is set somewhere near Timbuktu, and it is so colourful you almost need sunglasses. I imagine reality in the Timbuktu neighbourhood is equally full of colours, and must be a sight to behold.

Anyway, these goats are trouble, and eventually they have to be taken to the market to be sold. Or do they?

You can love troublesome goats, you know. Just try.

The second picture book by Stephen Davies and illustrator Christopher Corr is Don’t Spill the Milk! and it is equally loving. A smaller family, with little Penda being allowed to take her mother’s role and walk to where her father is looking after the sheep.

She has to balance a bowl of milk on her head all the way there. And it is such a long way for one girl and one bowl. But she can do it. All the way to…

Penda’s dad is a nice dad, and he’s not angry. He shows her how much he loves her. Then they eat the mango.

There couldn’t be more colour in these books if you tried. They are fantastic, both in looks and in simple but loving content. As long as your child doesn’t start balancing their Weetabix – with milk – on their head.