The Longest Night of Charlie Noon

I’m glad I read this book! I was going to, then decided not to, and then changed my mind again. You don’t need to go through this process; just take my word for it.

This is the story about three young children who get lost in the woods one night. Maybe, if I’d noticed the signs, I’d have realised it’s not set today, and that would have helped. But whatever your starting point, this is a fascinating meander in the suddenly so strange woods, where each of the children discover new things about themselves and about the other two. 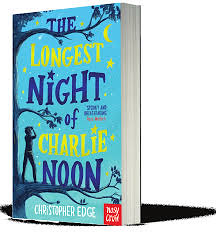 There are puzzles left in the woods for them to solve, and they need to cooperate to deal with them. They need to become friends. Two have always lived nearby, whereas Charlie has recently arrived from London. They all have something to contribute to help get them out of the woods.

This is middle grade reading at its best.

At last night’s Great YA Debate, chaired by Daniel Hahn, the discussion was kicked off by the children’s books world’s enfant terrible, Anthony McGowan, who was of the opinion that you shouldn’t

read YA. If, you are older than twenty, or so. Especially if you are white and female. And middle class.

Yes, that’s – approximately – what he said, but then Tony had been hired to be the naughty one, to get the conversation going. But he did mean it. I think. Mostly. Tony described his part as the hippo poo, spread all over the place, and Elizabeth Wein was there to clean up after him (and if that’s not an example of all kinds of -isms, I don’t know what is). 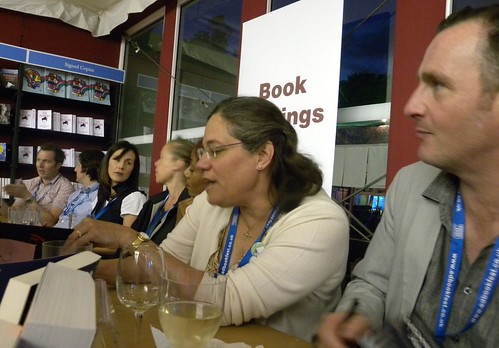 This year’s YA debate was different from last year’s. We had Daniel Hahn on stage with Tony and Elizabeth, and then they had a stash of other authors on the front row; Annabel Pitcher, Christopher Edge, Jenny Downham, Patrice Lawrence and Philip Womack. They all had an opportunity to disagree later on, as did the audience.

But first it was Tony who described going to YALC and finding it so mono-cultural as to be distasteful. White, female writers, 30+ who write brilliant, terrible dross for people in their twenties and thirties. Elizabeth argued with him, and Daniel pointed out that should anyone tweet that YA is crap, the internet would catch fire.

Tony wants adults to move on. YA is for teens. You should read what makes you unhappy, what you hate, or you won’t be stretched enough. Here Daniel admitted to not only being a reader of YA, but having had an Asterix day not long ago.

I decided it was a good thing Daughter had not come along to this. She’d have exploded on the spot.

No one should read John Green.

Elizabeth pointed out that contrary to what we believe in Britain, YA is fairly old as a concept, and existed in the 1950s in America. You would borrow books from the library or from friends, have them as presents, and you ‘read up,’ so even younger children would read about teenagers in books. She talked about Sue Barton and the Hardy Boys, and how Nancy Drew wasn’t considered highbrow enough…

Back to Tony who called readers of YA immature. Then he went on to talk about Meg Rosoff and Mal Peet as supposedly YA writers, but who write adult books, really, mentioning Life: An Exploded Diagram, which is a proper novel. (I think we are allowed to read it.) 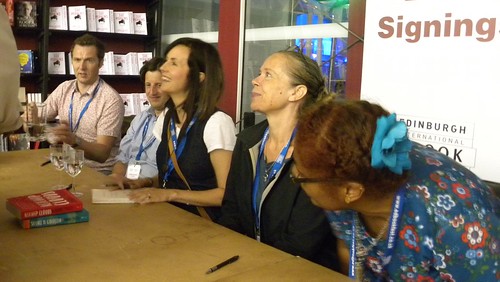 The authors on the front row came to life here, and Christopher Edge mentioned how he as a teenager went between Alan Garner and Jack Kerouac, depending on how he felt and it had less to do with age. Annabel Pitcher said she doesn’t agree that YA is twee or cosy, and looking at her own books you can see her point.

So Tony said the problem with YA is that it always takes you home. There will always be some sort of resolution and happy ending. It has to be miserable to be worthy. (You have to hand it to him. He really found irritating things to say.)

Philip Womack talked about Mary Shelley, who was a teen author (her age), although Daniel reckoned that writing Frankenstein was never a normal thing.

Back to Tony, who spoke about his experience of working with children in First Story, saying children themselves don’t write YA, unlike the white women or his students at Holloway [writing class]. The difference between [Edinburgh] events where audiences can be self selecting, or they come as part of school groups, is an important one.

Jenny Downham remembered being asked by a young working class girl at a school event whether people like her could write stories. And Jenny mused over the weirdness of finding her own Before I Die on two different shelves in bookshops, both as a children’s book and an adult book. 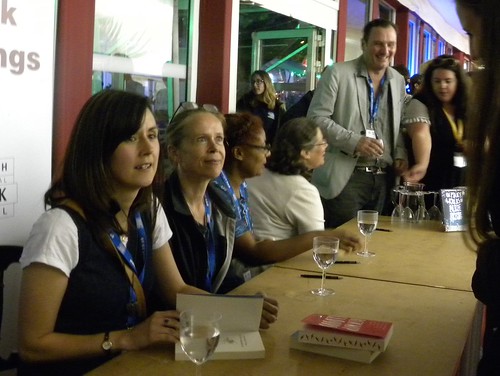 Elizabeth said as a teenager she read lots of categories of books, but as an adult she doesn’t. Tony chipped in and was disparaging about YA book bloggers, and claimed we are not his friends (I will have to think about this). Patrice Lawrence pointed out that at 49 she has lived more than half her life and she has no intention of ruining the rest with Dostoyevsky. Her own Orangeboy is not a book for 28-year-old book bloggers.

And on that note Daniel opened up the discussion to the audience ‘in the unlikely event anyone has any views.’ They did.

The talk was about marketing and whether editors have views on what should be written. The difference between rainbow colours for children and black teen books in shops. A 16-year-old wanted beautiful books [the writing] and Tony came back with saying children’s books are often funny, and teen books not.

Elizabeth feels independent bookshops have more advice to give on what to buy, and it’s important as young people rarely buy, but have books bought for them. 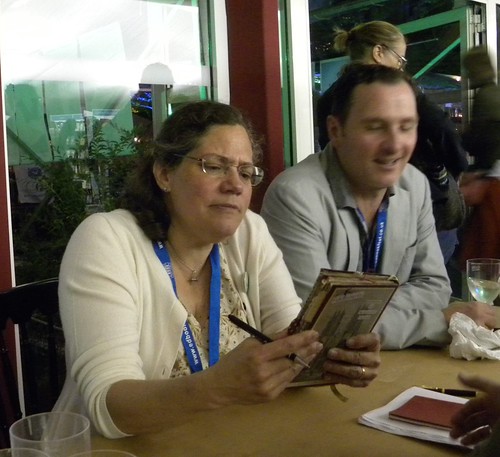 Daniel suggested that the remaining time should be for readers under twenty (so that shut me up!) and there were many of them, with interesting thoughts on books and reading. The odd one even agreed with Tony. The girl behind me said she finds War and Peace intimidating. Someone else said there are many exciting YA novels out there, but you have to dig deep to miss the crap.

Our time was up and Daniel suggested continuing the chat over signing in the bookshop. The adult bookshop (the children’s bookshop was closed)…

There were many readers queueing up and many discussions. Elizabeth Wein won the popularity contest (if there was one) with by far the longest queue, which, naturally, I had to join. But I did have some books for Tony – yes – to sign, too. He asked if I offered them out of pity.

Before running for my train, I had time to chat to publicist Nina, ‘Mr Wein,’ and the lovely Philip Womack, who actually is a Bookwitch reader and who didn’t even twitch when I admitted to not having reciprocated. And finally I made myself known to Barrington Stokes’ Mairi Kidd, who thanked me for loving them, and wondered whether I could love even Tony. We decided I could. 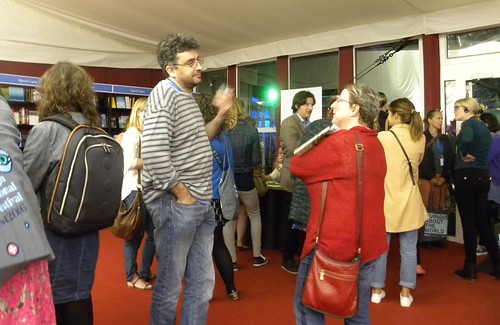 Authors simply don’t look like they’re meant to! You google them and know ‘exactly’ who to look for and…

Great minds think alike. The only difference being that the representative from Stockport Library Services had printed out his cheat sheet of author photos to help him recognise the award winning authors he was at my neighbourhood hotel to greet, while I had tried to memorise people’s faces.

In the end we did equally well, I’d say. We even recognised each other.

I obviously know what Jeanne Willis looks like; the glammest girl in the children’s books world. She also knows what I look like, but I will spare you a description.

She was the first one down, and it was purely because the bar made for a nice shiny background that I photographed her there. Jeanne has never set foot in a bar before Wednesday evening. And what a foot! I mean; what an ankle bracelet!

Jeanne won the KS1 award with Tony Ross for their picture book Hippospotamus, and just to be fair, I allowed Tony to flash his shoe and calf as well, although it wasn’t quite as exciting as when Jeanne did it. Although Tony looked most debonair. The upper half, I mean. (Note the halo.)

Thomas Taylor was next to show up, and he won the Early Years award with Adrian Reynolds for The Pets You Get! I found this a little confusing, since Thomas is an illustrator,* but it seems he has written the words this time and Adrian did the illustrations.

With so much handshaking going on, Matt Dickinson appeared, brandishing a hand after hiding in a corner somewhere. He was freshly arrived from Spain, so Stockport might have seemed like a bit of a letdown. Unseasonably warm, but not that warm. Matt is the author of Mortal Chaos, which won him the KS3 award.

Someone who was in town, but not at the hotel, unfortunately, was Christopher Edge, who wrote the KS2 winning book Twelve Minutes to Midnight. (So, no picture.)

Apparently the unspoken theme for the evening was the Oscars. I can believe that. Jeanne Willis in black and diamonds looked every centimetre the part. And then Katie Dale walked in, looking more like a fairy princess than any author I’ve ever seen (and I’ve met a few by now). It was definitely a Wow! kind of moment.

Katie won the KS4 award for Someone Else’s Life, and I suspect the sight of That Dress could have rendered hordes of her fans speechless. Or perhaps they merely screamed.

If you are thinking that I am being shallow, going on about clothes, then you are quite correct. Reading is important, and the children of Stockport have read and voted. But there comes a time when glitter and glamour rule. Like Wednesday night at The Plaza.

For more down to earth-ness we discussed the difficulty of leaving Clacton (now that I’ve been warned, I will never go), and as the time came for the assembled beauties to leave for the award ceremony, there was a major taxi fail. None of the pre-booked pumpkins turned up, so wands had to be waved again, and again, before a successful leaving could be executed. (Katie’s dress obviously needed a whole backseat of its own…)

And you know, after last week’s income reveal, and the number of authors who pay to go to awards, I had forgotten one aspect. Just think of the money spent on dazzling the fans with outfits like these! Utterly selfless.

*If you think you don’t know Thomas or his work; think again. He’s responsible for the image on the right. A few of us will have seen it somewhere, despite it being the cover of a first novel by someone totally unknown.

(It’s my favourite of the HPs. I hadn’t realised they were done by different people. Now I know.)