I was about to say I don’t reckon I’ve seen the Lewis Chessmen in real life, but in my younger museum-going days I looked at lots of things without retaining a great deal of memory. (In one eye, out the other?) So I might well have said hello to them.

If not, I have now, through a book. The British Museum is re-issuing Irving Finkel’s The Lewis Chessmen and what happened to them. Great illustrations from Clive Hodgson shows you the Queens braiding their hair, and chess people drinking and having fun.

And fun is what this is. To be honest, I didn’t expect it. 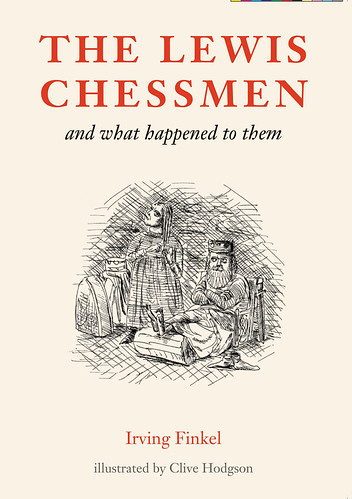 Irving is telling the tale of these chess pieces from back when they were hibernating on Lewis and were found by a cow, and soon after by a fisherman. Then follows a trail of the Lewis Chessmen’s travels all over the place. They kept being sold, until they ended up in The British Museum in 1831.

Well, most of them did. They had to suffer the agony of separation, and across marriage vows at that. It wasn’t until 1993 that some Queens and Kings were temporarily reunited, when they were able to ‘visit’ for a few months. (They had a lot to talk about.)

This is a terrific way to sell history and ‘boring old museum exhibits’ to people like me. I believe the book was mainly intended for children, and I hope loads of them get to take a copy home from the museum shop. You could do a lot worse.

(And afterwards I suggest you have a go with Francesca Simon’s version.)