The Dangerous Lives of the Jacobites

The Jacobites used to get a mention in stuff the young witch watched on television. She had no idea then – or until much more recently – who they really were. Good? Bad? Or depends on who you are?

The latter, I’d say. Now I’ve read the story by Linda Strachan, about a Jacobite family in 1745, I feel I know a lot more, even if my head is reeling a bit from all the information. 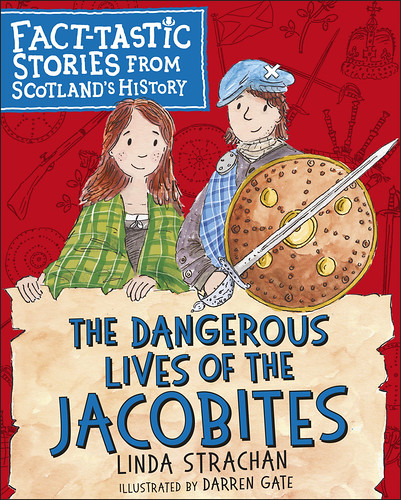 I like the story about Rob and Aggie, and about fighting for Bonnie Prince Charlie. It’s as I usually say; it helps to understand history when you meet and get to know and like some of the people who were involved at the time.

It’s also useful to have facts to help with that understanding. However, I felt there was too much. I got lost among the Kings and all the rest of them. There were also several risings, and most of the old battles I’ve heard of appear in this book. But I do feel I’ve got the gist of what some Jacobites were like.

Illustrated by Darren Gate, you can see what kind of clothes they wore and what sort of house people like Rob and Aggie lived in. There’s a menu, as an example of what they had to eat. I reckon this kind of book will work very well in a classroom, helping to explain history.

For instance, for all the mentions I’ve come across in my life of Bonnie Prince Charlie, I had no idea he was ‘Italian.’ And in a way it’s a bit sad with all these princes who wanted to lay claim to thrones and who fought and sometimes died, and all for what? On the other hand, unlike today’s leaders, it seems they actually experienced the cold and the mud and the dangers. Just like their followers did.