St Rita’s School isn’t your average girls’ boarding school. Not even if you factor in that it’s in a book. It’s falling apart and the food will poison you, if you’ve made it that far. Most of the girls seem to be delinquents, so Daphne, the new girl who’s been expelled from her old school, should fit right in. 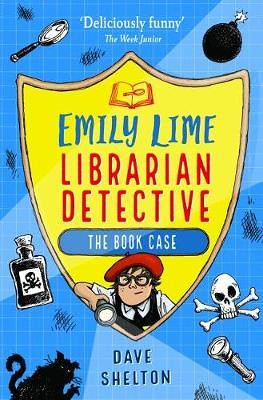 In Dave Shelton’s humorous crime novel, set at St Rita’s soon after WWII, there is never a dull moment.

It’s not clear if this is the first of several school library mysteries, but I’d welcome more. After all, there has been no explanation of George, the lone male student at St Rita’s.

And the train journey there would be worth revisiting. Those were the days!

It makes sense really. Who but Dave Shelton could be awarded the Branford Boase for his lovely – if stained – A Boy and a Bear and a Boat? Your Bookwitch wasn’t present, but that’s at least five Bs to start with, which is plenty.

Or you could make it the Davids, Shelton and (editor) Fickling. The latter must be getting used to winning the Branford Boase along with his new authors. He does it so often.

I won’t pretend to have understood the Boy, Bear, Boat book. It was lovely, but incomprehensible. I particularly liked the stain on the cover.

Since I wasn’t there, I will have to make it up. Philip Ardagh was there as usual. (He only stays away when I’m there. Perhaps we take it in turns, Beardy and me?) I believe Jacqueline Wilson did her normal awarding stuff, and there will have been child winners of the Henrietta Branford Writing Competition.

Some, or all, of the other shortlisted writers were there, and while they didn’t have quite such a wonderful evening as Dave did, I’m hoping it was fun anyway. The Branford Boase is one of the most enjoyable events, and I’m sure this was the case yesterday as well. I hope it didn’t rain. My first time was spectacularly wet.

(I considered tweaking [doctoring] some old photos of David Fickling winning, and of Jacqueline Wilson presenting, or Anne Marley or David Lloyd speaking. And then I decided against.)

Luckily I didn’t run into either of these two chaps as I haunted Edinburgh this week. Twice. That’s twice I didn’t see them. In fact, I forgot to even think about Philip Caveney and whoever that is behind him. ‘He’s behind you!’ Lucky, seeing as I was running around all alone in the dark.

Lucky too, that I had not yet come across Chris Priestley’s A Creepy Christmas, the story he has written for 247 tales. That is another thing you don’t want to have on your mind as you’re out alone, in the dark or otherwise. Good to see that the 247 tales are still going strong.

Pleased to hear that Bali Rai won one of the categories at the Sheffield Book Awards this week; his quick read The Gun. Obviously, other books won too, and even more were commended. Read all about it here.

Have been alerted that Sophie Hannah – who seems to be successful at just about everything these days – has been shortlisted for the Nibbies. The event is on Tuesday next week. Lots of other authors are also on the various shortlists, and pirates would appear to be in as far as children’s book titles are concerned. (It was hard to find the lists, however. Something wrong with google? Can’t be me, can it?)

But I did find it a little tricky to discover the Costa shortlist, as well. (So definitely not me, then.) Sally Gardner, Diana Hendry, Hayley Long and Dave Shelton are this year’s hopefuls. I’ve read two.

And speaking of awards, I was very happy to hear that Barry Hutchison got married last week. He had proposed in a fairly public sort of way, by putting it in one of his books. Glad it paid off, and that he has now been made an honest man of. More good Hutchison news is the arrival of the cover for The Book of Doom. Would quite like for the rest of the book to get here, too. Fast.

Fast is what another book would have managed, had I not been so busy running around a darkened Edinburgh. (See top.) A very early incarnation of The Bone Trail, the last in the Wyrmeweald trilogy by Paul Stewart and Chris Riddell has been made available to me. I happened to mention I wasn’t feeling especially patient.

Arrived home to find DHL had missed me. (Miss you too.) I arranged for redelivery on Monday. Except they turned up yesterday. As I squeezed the package (to find out what it might be, the way you do) it felt like a rucksack. Couldn’t see why Random House would send me one of those.

I will now stick a plain sheet of A4 to the back of The Bone Trail to prevent me accidentally looking at what seems to be the last page of the book. A witch likes some element of surprise.

I have read a lot of comics in my time. Not for a while, though, and never actually the DFC. I did try to lay my hands on a copy, but without any luck, which is why I’m especially happy to witness its reincarnation into the Phoenix.

If it hadn’t been for the sad fact that I could never persuade Offspring to understand the charm of comics, I’d have said it’s an essential part of childhood. Maybe it’s because their childhood didn’t take place while there was a David Fickling related comic? Let’s say that’s the reason.

I’ve also read quite a few bad comics, or at least iffy ones. That is not something you can say about the Phoenix, which is quality through and through, while still being fun. I knew some of the cartoonists from the comic books David has published, so that was nice. But some of the hitherto unknowns also proved to be fun.

They let me have three copies of the Phoenix, from varying stages. And I have to say that reading an exciting story which began in issue zero (honestly, zero…) and then coming back to it twelve weeks later, only to find that it ends in the most recent issue, is a bit, well… I’d have liked to see what went on in the middle. But it wasn’t to be.

And I have now left Good Dog, Bad Dog hanging in mid-air as well.

I’ll get over it.

An elderly witch does not have the same amount of comic-reading time at her disposal as her younger self had. If she did, there would be lots of stories to read every week and puzzles to solve and weird little comments from Tabs and Chops, the editors.

There are cleverly disguised book ‘trailers’ for new books recently or soon to be published. (That’s right. Get them hooked. Make them desperate.)

I found one adoreable spelling and one spelling error. The error was mine and I wonder how they knew I’d need to be told. It has now been edited out, and most of you will be none the wiser.

A Boy and a Bear in a Boat

What a lie! Somewhere in the press release for A Boy and a Bear in a Boat (phew, from now on this will go under the name of BBB) someone tries to make out Dave Shelton is a first timer. So why did I recognise his name? And why did my blog software recognise his name? Because we have reviewed Dave before. That’s why. Admittedly for a comic, but comics are books, too.

First timerness apart, BBB is a very lovely little book, complete with teastains and worn edges. I hardly had to add a thing myself, although I did try some sandwich at one point. This little blue book is covered with a map of the sea. It’s blue.

So is the wide wide sea on which Boy and Bear find themselves, in the Boat. And that’s pretty much it, folks. BBB.

I’m not at all sure what it’s about. Love, probably. Courage. Tenacity. Hope.

It’s impossible to describe, without giving too much away. I liked it. And I’d love to put copies of BBB into the hands of lots of little boys. I don’t know why, but it feels like the kind of thing one ought to do.

I well remember David Fickling’s ‘why not?’ when I admitted I hadn’t taken out a subscription to his comics. I slunk away in shame, but the truth which can be hard to admit sometimes, was that it was simply too much money for us at the time. I just hope I wasn’t the one to sink the DFC.

Now I’m happy again, because the comics are back in book form, and I’ve read Good Dog, Bad Dog by Dave Shelton, and it’s great fun! That’s hardboiled dogs (oh dear, that sounds rather like a cross between eggs and sausages) embroiled in colourful crime, comic style.

Book 1 contains three stories, and they are beautifully drawn with colours good enough to eat, and stuffed full of clichés. Don’t take this wrong; one wants clichés in these circumstances. ‘The name’s Bergman. Kirk Bergman. But you can call me “Detective”.’ It’s police dogs (I mean canine cops) Kirk Bergman and Duncan McBoo, out solving crime. McBoo is so clumsy I haven’t yet worked out whether it’s an intentional thing, or if it’s more serendipity that the clumsiness helps solve crimes.

(I have an odd coincidence here. While I was DFC-less a couple of years ago, I was offered the chance by Candy Gourlay to read her copies, had I been in north London. As you know, I’m not exactly in north London. More north of London and then some. Now Candy is David’s next big new author, except she’s not very big. Her book is though, Tall Story. And coincidenting heavily here, I am soon on my way to both London and eventually north London, and Candy, and David. And a few others.)

Anyway, I reckon comics as books is a good thing. You can hang on to them without feeling a complete nerd for having stacks of comics lying around.