I almost expected the ice sea to have melted by the time I got Frida Nilsson’s book to read. But it was still cold. At least in the book. The Ice Sea Pirates, translated by Peter Graves and illustrated by David Barrow, is that kind of slightly old-fashioned, traditional children’s book that we often hanker after. 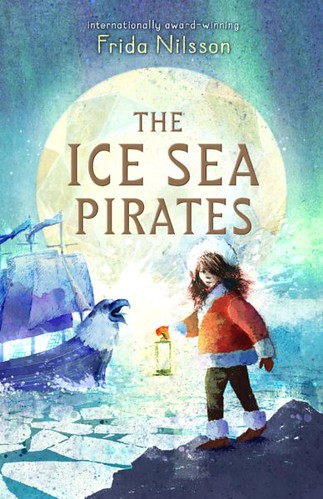 Ten-year-old Siri lives with her sister Miki, who’s seven, and their father, somewhere far north, where it’s cold and life is fairly hard. And where there are pirates who snatch small children, forcing them to work for Whitehead, the pirate captain, somewhere unknown. All that people know is that the children are never seen again.

And then Miki is taken. The adults reckon it’s now too late to save her, but Siri is aware it was her fault and she vows to get her sister back. What follows is a hazardous journey for a young girl, meeting unreliable adults who mostly want something for themselves, rather than to help such a lost cause.

But Siri does make some real friends, and she perseveres like a true heroine.

I can’t tell you what happens, or how, but there are mermaids – yes they exist – and wolves and it is freezing cold. So cold you can walk on the sea.

As for me, I was so busy looking for connections between people that I missed the most important one. But if you have courage, you will go far.