She notices things, does Lin Anderson. She’s very kind, and she came up to me to ask ‘did I want a chair?’ I did, and she gave me one. I asked how she knew, and it seems I was leaning on a stack of brown boxes. I was. I just hadn’t noticed.

So there I was, the only one sitting down. Very comfortable it was, too. My friend Helen Grant had to stand, but apparently she prefers that. She’s going to be at the tenth (?) Bloody Scotland in September. High time, if you ask me. She’s as scary as the rest of them.

Between me and the mail chimp I almost didn’t make it, but I was in a position to dash off to the Golden Lion at very short notice this morning, so I did.

You will have noticed my question mark above. I am sure they know what they are doing, but I am equally sure it’s not the tenth Bloody Scotland. One of us will be wrong.* But I was given a chair to sit on, so will not insist on being right.

After some suitable mingling, Bob kicked things off. He’s the boss. He then handed over to Citizen Kane, sorry, Councillor Kane, to talk about how much Stirling loves Bloody Scotland. Then it was back to Bob again, with more information about the sheer wonderfulness of what is to come. And there is a lot.

I was quite excited to find Sara Paretsky on the front cover of the programme, but cynical enough to realise she will Zoom in. So are some of the other grand crime writers. But most are coming here, and I already have a conundrum as to who to see and who to miss. Helen is appearing with ‘my old pal’ Stuart Neville, and new Swedish star David Lagercrantz will be on a panel with Simon Mason, David Fickling’s man in the basement.

Not going to list all the others. Look at the programme. It’s already live. And Crime at the Coo sold out instantly, so don’t even bother trying. Anyway, it’s on from 15th to 18th September, and if you are good with numbers you can see they have added a day.

As we left, Helen and I ended up behind everyone being photographed on the steps of the Golden Lion. I considered trying to look especially silly, but gave up. Having squeezed through, we then joined the throng on the pavement instead.

After which Helen bought me a baked potato across the road.

*That will be me. I’m a foreigner. There is a difference between anniversary and tenth event… Thank you again for the chair.

Back when I first read the first Millennium novel, I wasn’t expecting this. Neither the continuation of ‘writing’ Stieg Larsson’s books for him, nor who might translate them. So here’s to Stieg, David Lagercrantz and Ian Giles!

As a most cynical witch I still feel awestruck when I realise quite how much someone else believes. Which is sort of nice.

A few books ago I wrote here about David Lagercrantz, the man who is writing Stieg Larsson’s novels now that he is dead. That time it was based on an interview by one of David’s best friends, Johan Norberg, who usually writes [my favourite] columns in Vi magazine. They are often about music, because that’s Johan’s day job.

This time Johan had a hand in helping David with some music advice for book five, where he needed a piece of jazz, and got both the suggested Django Reinhardt track and all the necessary musical terms from Johan. The latter were important as part of the plot hinges around stuff like minor 6. (No, I don’t know what that is, but I get that it matters.)

When it was time for the English translation Johan offered to proof-read, but David ‘knew’ that he and his book were in safe hands with this major publisher, who would use experts for those parts.

And then Johan met the translator at the launch party and chatted about this, learning that the translator had asked his neighbour for help. ‘A musician?’ asked Johan. No, it seemed she had done music studies at university. Johan smelled a rat, and quite rightly. The minor 6 had become seven, and chords and stuff had not been translated, and other things invented in their place…

I gather that in the next edition, all is well, translated and proofed by Johan.

Next week it’s time for this year’s book fair in Gothenburg. Maybe we should refer to it more as a Swedish book fair? Because it is the book fair, and it just happens to take place in Gothenburg. People travel there from Stockholm. In fact, perhaps they need an excuse to leave.

Before I out-festivalled myself this summer I was seriously tempted. It was as if the nine-year gap from 2007 to 2016 had not been. I was there last year and although I was exhausted from the word go, it still felt as if I should – would – be going. But we all get funny notions occasionally. I started with Philip Pullman, and ended with Meg Rosoff. Not sure what the fair would need to offer to rouse me this time.

The programme, which I perused carefully, has a lot going for it, and that was before I recollected that many authors are boycotting it this year, for permitting the far right to attend. And – this might gall them, if they actually read Bookwitch – I didn’t miss them in the programme. It looked interesting enough anyway.

My new ‘pal’ Christoffer Carlsson will be there on the Saturday. There are talks on subjects such as Arabic children’s literature today, and Are there too many children’s books being published? It bears thinking about. Black Lives Matter, on politics in teen books. Quality or Quantity? on children’s publishing. Read Yourself Well. Very important. Does the Swedish school system kill the creativity of its pupils? Chapter books vs YouTube.

Jenny Colgan will be there, talking among other things about living in a castle. I didn’t know she did. How to use children’s books to talk about current affairs. And it seems Norway has never been hotter [in children’s books].

Perhaps there are fewer ‘names.’ I’m not sure. But then, it’s not necessarily the ‘names’ that make for a good event. We flock to see and hear our literary stars, but occasionally they can be less good at performing than other literary professionals.

YA in Icelandic; how about that? Or there’s M G Leonard and Frances Hardinge. And does educated = well read? I suspect there won’t be any cake in the Afternoon Tea event with Jenny Colgan and Sophie Kinsella. Or even tea. An event on how reading trash could be the start of good reading sounds just like my kind of thing.

In fact, right now I am wondering why I’m still at home. (I know why, but temptation is back.) David Lagercrantz talks about his Lisbeth Salander, with Christopher MacLehose. FYI I’m still only on Saturday. One more day.

Astrid Lindgren and Jane Austen. Not together, and not in the flesh, for obvious reasons. More Val McDermid. Some [Swedish] superstars like Sven-Bertil Taube and Tomas Ledin. It gets lighter as the weekend progresses. It’s a way to tempt the masses to come on the Sunday, and it’s a way for the masses to rub shoulders with stars.

There’s Arundhati Roy. Ten years ago I grew – almost – blasé about seeing Orhan Pamuk all over the place. It’s what it’s like.

I might go next year. But I’ll – probably – never again have constant access to my favourite author as I prowl those corridors. 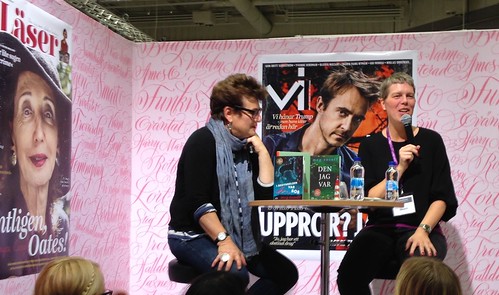 I don’t mind in the least. But at the same time I wasn’t eagerly looking forward to the next ‘Stieg Larsson’ novel, even if it means I can have more of Lisbeth Salander. Didn’t exactly feel I’d boycott the book, but nor did I visualise myself reading it.

But then I read the first interview with David Lagercrantz in Swedish magazine Vi. It was a good interview, done by one of my favourite columnists on Vi, Johan Norberg. Johan usually writes about music, which he does well, since he’s a professional musician. He’s also a good friend of David’s. It’s very Swedish, this, but for the last two decades these men have delivered and fetched their children from the same daycare. (Yeah, a lot of children were required.) 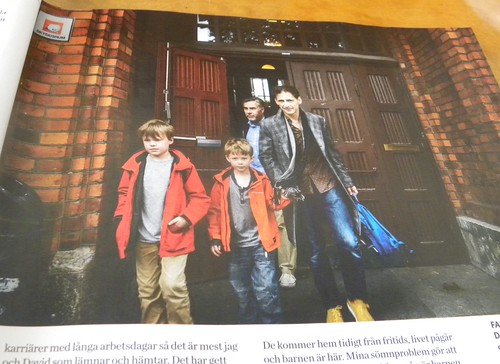 The Girl in the Spider’s Web (Swedish title Det som inte dödar oss [literally What doesn’t kill us]) was conceived and written under the greatest secrecy, like something straight out of a Stieg Larsson novel.

When I first heard David Lagercrantz was writing the book my cynical reaction was ‘of course,’ as in my mind he belongs to a writing dynasty. Turns out he’s part of the nobility, too, which I didn’t know. But from my foreign horizon I had no idea it was David who wrote Zlatan, or any of the other books he’s responsible for. He just wasn’t important enough for me to keep track of.

For obvious reasons Son wondered who the translator of this fourth Millennium novel would be. The name George Goulding elicited more wondering, as he was totally unknown to everyone. Some digging by Son suggests he’s a pal of Christopher MacLehose, with no translating past, apart from the recent Alan Turing book, also by David Lagercrantz.

Anyway, judging by Johan’s article in Vi, David is a nice, and somewhat shy man, who prefers not to leave his home, other than for the previously mentioned school run. He has been subjected to the expected nasty tabloid articles, because in Sweden it doesn’t do to seem to be more than anyone else. (But they can’t all write Larsson novels!)

David’s only comment to Johan’s interview was that he most certainly doesn’t shave using disposable blades. So now you know.