The Bear, the Piano, and Little Bear’s Concert

I read this to Daughter the other evening, when it was time for bed. It went down well. She’s a recent convert to these lovely books by David Litchfield about the piano-playing bear. I’m sure much younger children will also love this last instalment featuring the piano in the woods.

It’s a bit sad. Well, it has to be, so it can get better. I’m sure young readers instinctively understand this.

Bear continues playing the piano in front of audiences, until, well, until he doesn’t, and instead goes home to the forest. But he misses his old life and his friends, and he is sad.

Things improve when he has Little Bear to bring up and teach things. She is a lovely young bear, and when she comes across the piano in amongst the trees, she wants to know what it is. And then she hatches a plan…

It’s lovely. For an older reader like me, it’s easy to predict how it will work out, and probably also for a younger reader. But it is just as satisfying. Very beautiful, as are David’s gorgeous illustrations.

Music to your bears

Remember David Litchfield’s gorgeous picture book, The Bear and the Piano? It’s one of my long term favourites; one that needed no reminding when I heard of the new musically enhanced picture book video, with the story read by Joanna Lumley, and score by Daniel Whibley.

In all fairness, I required Daughter’s assistance with the technical stuff (but that’s probably because they let me watch for free).

And when we’d caught the musical bear, we decided to move him over to the TV for some bear size enjoyment. The gorgeous illustrations were even better on a bigger screen. And the music was just right, as was Joanna’s reading. Daughter, who had not read the book, watched with rapt attention – and it’s not as if she’s a toddler – loving the music and getting caught up in the story of the bear who finds a piano in the woods. Almost crying when it looked a bit too sad, and then not, when it didn’t.

David Almond’s new, short, book War Is Over is mainly about young John, who in 1918 keeps being told that he is at war. He – rightly – feels he is too young to be at war, as are German children. Whatever the adults say.

This story is mostly about the perception of Germans, and about the ‘cowards’ who earned themselves white feathers, like John’s friend Dorothy’s uncle, who hides in the woods, because he has dared suggest Germans are also people.

John is a lovely boy, and I hope he grew up to do something about this hatred of foreigners. 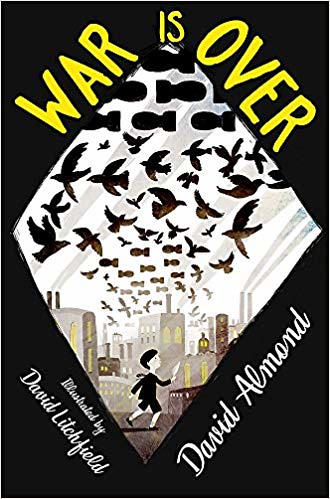 The book is richly illustrated by David Litchfield, and you’d want to read the book if only to look at and enjoy his illustrations. They are pure art, and so beautiful.

And then, thinking about how Germans apparently are not human beings like the British, I caught some of the Remembrance Sunday ceremony on television yesterday. I watched as afterwards, the President* of Germany led members of the British Royal family away from the Cenotaph.

My mind almost boggled. Here we had been remembering two wars against Germany, and here was the President of that former enemy country, not only present, but important enough that he went before the Royals. I almost had time for the thought ‘isn’t it great how far we have all come for this to be seen as the norm?’

And then I remembered what the politicians are busy doing right now.

(*His name is Frank-Walter Steinmeier, if you didn’t know. I didn’t either.)

The Bear, the Piano, the Dog and the Fiddle

You remember the piano-playing Bear? The Bear who couldn’t help but play the piano, and who became incredibly famous and successful?

He’s still big – he’s a bear, after all – and possibly taking so much of the attention that other musicians hang up their instruments. It’s what happens to Hector, a fiddle player, who’s never seen without his friend, Hugo the Dog. They go home, and Hector not only doesn’t play any more, but mopes. And sleeps. And with Hector’s back turned, Hugo starts taking an interest in the abandoned fiddle.

Hugo might be just a Dog, but he can play. And then he’s recruited by Bear, to join Bear’s Big Band.

As in many friendships, words are said, and Hector and Hugo part.

But because this is a children’s picture book, it’s not hard to work out what must happen. Tears everywhere. 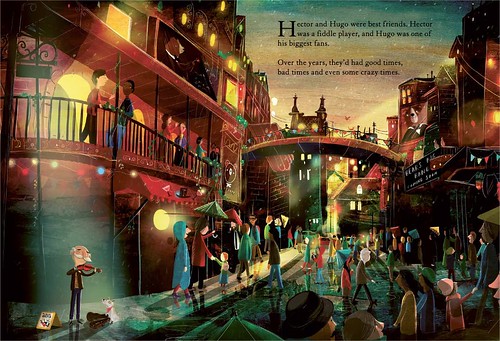 The illustrations in David Litchfield’s book are so gorgeous and so grown-up – by which I mean they appeal to adults – that you just have to love this book. For me it’s another instance of wanting to tear the pictures from the book and frame them.

The Bear and the Piano

The idea that given enough monkeys and typewriters you will end up with Shakespeare works for bears and pianos found in the woods, too.

In David Litchfield’s beautiful picture book The Bear and the Piano we meet a bear cub who encounters a piano in the woods one day. He has no idea what it is, but plonks a bit. 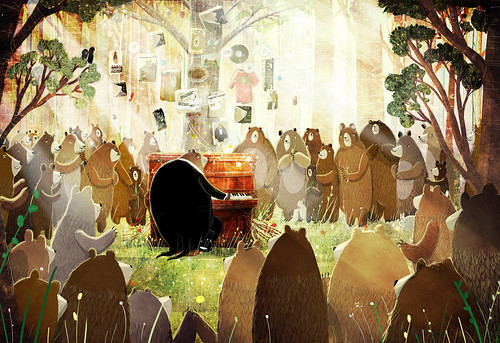 He keeps returning to the piano, plinking and plonking, and suddenly one day he finds he can play beautiful music, which makes him very happy. The other bears come and listen, and before long he’s discovered by the humans and carted off to perform in packed concert halls.

The bear enjoys his new life, but starts to miss the woods and his friends. The question is, can you go back? Will they remember you?

This is a nice little story, with gorgeous illustrations.