‘Handsome and informative.’ So says a quote on David Long’s website, and who am I to disagree? Anyway, a man who can write so well about Apollo 13 is obviously a man worth knowing more about. Right? So here he is, spilling the beans on Swedes and other secrets:

How many books did you write before the one that was your first published book?

None, although I ghosted half a dozen for other people before one came out with my name on it. These were not celebrities but interesting, successful men and women who had an interesting story to tell, but lacked the time or temperament to sit down and write it themselves.

To be honest it can strike anywhere (but I once had a great idea for a title when I was in the bath).

Would you ever consider writing under a pseudonym? Perhaps you already do?

See above. I also spent 25 years as a journalist, when I think about 5% of my pieces were written under one of several pen names.

What would you never write about?

I wouldn’t rule out anything, although I find all sports incredibly boring.

I’ve shaken hands with two of the twelve men who walked on the Moon, which is one of the reasons I wrote Survival in Space.

Which of your characters would you most like to be?

Do you think that having a film made of one of your books would be a good or a bad thing?

A bit of both, but I have written a script – and won an award for it – so clearly I’d like it to happen

What is the strangest question you’ve been asked at an event?

“Were there any rabbits in the war?” (during a reading at Edinburgh Festival).

Do you have any unexpected skills?

My handwriting is even worse than my father’s was, and he was a doctor. Does that count?

The Famous Five or Narnia?

Who is your most favourite Swede?

Carl Linnaeus, the botanist-zoologist who worked so hard to make the world understandable.

How do you arrange your books at home? In a Billy? By colour, or alphabetically?

Alphabetically! I’m not a barbarian.

Which book would you put in the hands of an unwilling eight-year-old boy reader?

Emil and the Detectives, by Erich Kästner

If you have to choose between reading or writing, which would it be?

Writing, but that would be a really, really tough choice.

David sounds like a sensible man. Definitely not a barbarian. But I would have liked to know more about the rabbits.

Survival in Space – The Apollo 13 Mission

I’d not realised quite how old I am. Or stopped to consider how young Barrington Stokes publicist Kirstin is. But there is nothing like a 50th anniversary of the Apollo 13 mission to bring these facts home. To her, it’s a historical – and interesting – tale. To me, it’s something I lived through, found fascinating, wrote an essay about at school, and nerded like crazy about.

For me there was nothing boring about the third trip to the Moon, unlike – it seems – many people who felt we’d done the Moon now, so what was special about it? I didn’t even realise this was an optional setting; you just had to be interested in such an interesting thing.

To mark the 50th anniversary of Apollo 13 Barrington Stoke are publishing David Long’s Survival in Space – The Apollo 13 Mission, with lots of excellent illustrations by Stefano Tambellini. It is such a great thing to have a book like this in dyslexia friendly format, and it’s so attractive.

David starts by giving the reader a brief history of how man has always wanted to get off the ground, leading up to the lunar expeditions, starting with Apollo 11, and moving on to Apollo 13. And let me tell you this, his summary of what happened is much better than my essay, and it tells you exactly what you want to know. It’s almost as if he had been there.

I don’t want to give anything away, but there was a mishap – on April 13th, even, in some parts of the world – and the astronauts had to do heroic things, hoping to return safely to Earth.

Watch the film. I will. Again.

But as I said, read the book.

I mean, if anyone had made this up, as a script for a film, it would all have seemed a bit unreal, wouldn’t it?

When We Walked on the Moon 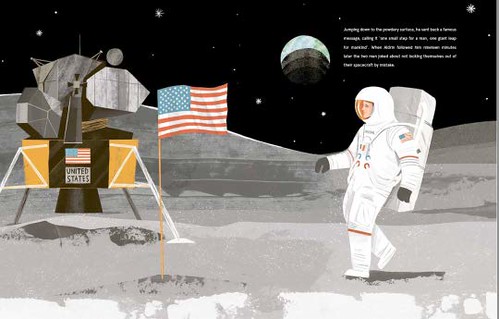 Now that it’s been fifty years since the first moon landing… How can it have been? It was so long in coming and it was a historical moment, and now it’s been half a century and it is history.

David Long’s book, with illustrations by Sam Kalda, is the kind of book a lot of keen nerds will love. Back then we were definitely nerds, even if I didn’t know the word, and I believe we still need some word to separate out those who are crazy about space and the Apollo programme and all that went with it. It’s not a bad thing to be.

There is a brief history to explain how it all came about, but mostly it’s the Apollo 11 moon landing. But that’s what a lot of young readers will want.

The rest of the Apollo trips are also described in When We Walked on the Moon, with plenty of pictures to show what it was like. The style is nice and chatty, and easy to understand.

At 13 I might have been too old for this kind of book, but I am certain I would have loved it anyway. And now, a ‘few’ years on, it’s a lovely way to celebrate what happened, and to look back, and even, perhaps, dream forward.