Last night I attended the Irish Book Awards – presented by Evelyn O’Rourke – for the first time. As you can no doubt understand, that’s because it was all online and anyone could go. It seems quite a few people did, so that’s all good. For the first time for some years I hadn’t voted. That’s not due to any lack of interest. Just that I’ve not had a single one of the books come my way.

I sharpened my ears when the children’s award was mentioned, and then I reflected that the shortlisted books were all rather young. This became clearer when there was an older children’s book award too. Not to mention that they then offered a YA prize.

So, there were three lucky winners, and since the winning books all had two people involved, the night had six children’s books winners in all.

The presenter had mentioned that there were very many hopeful authors waiting to hear if they had won. Well, the odd thing was that every winner already had their decorative bit of glass that is to go on the mantelpiece… Either they did know (perish the thought), or, well, this is Ireland. Perhaps one of those fairies we hear of, instantaneously magicked the glass contraption to the winners? Yes, that will be it.

The ‘youngest’ winner was The Great Irish Farm Book, written by Darragh McCullough, and illustrated by Sally Caulwell.

Next came the senior children’s winner, Break the Mould by Sinéad Burke, with illustrations by Natalie Byrne.

And finally the YA book, which was Deirdre Sullivan’s Savage Her Reply, illustrated by Karen Vaughan. I have, at least, seen Deirdre live, so feel I know a little about her, even if this was not the book she talked about in Edinburgh last year. And, her Christmas tree is already up!

It was nice to hear people talk about their books, and good to be able to attend. But let’s hope for a physical event next year!

By the end of her event on feminist fantasy with Deirdre Sullivan, whose most recent book is Perfectly Preventable Deaths – or PPD for short – we ‘all’ wanted to marry Maria Turtschaninoff’s husband. Apparently she felt ‘Mr T’ needed to be in one of her books, and he’s the really rather lovely man in Maresi, Red Mantle. 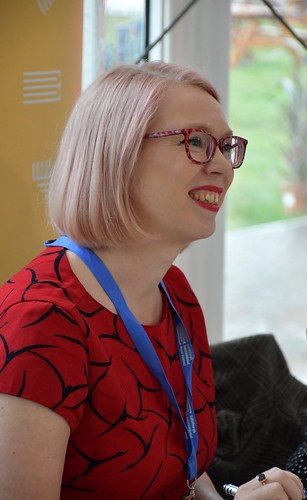 And while I’m wishing, I’ll have Deirdre’s dress (and the right shape to wear it). 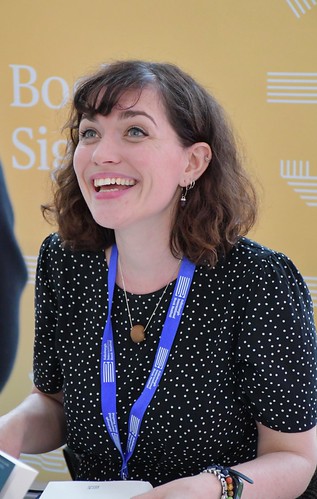 This event, chaired by Philippa Cochrane, introduced two authors who believe in women in fantasy, and for them to be powerful and successful without resorting to swords and magic. It’s the kind of thing we need more of.

I was cheered by Maria’s answer to the question whether they ever feel they are not good enough. Maria apologised and said she didn’t understand the question, as would be the way for someone who not only writes about feminists, but who lives like one. She has always wanted to be an author, but realised at an early age that it was best to keep this secret. Her cover was ballerina or deep sea diver.

Deirdre didn’t know one could aspire to become an author. To her it was like wishing to be a unicorn, or an orange, or a mermaid. She now loves writing, being able to build something that is her own. And if she doesn’t quite hear everything her husband says to her when she builds her worlds, that doesn’t matter. 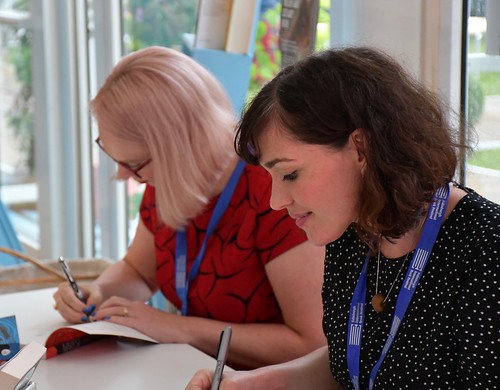 Both authors have recently written dramas for the theatre. Maria said that her play for the theatre in Vaasa was her first, and last. It sounded as if Deirdre’s experience was similar, and she would not write a play again, or at least for a very long time.

It was clear that the audience was very keen to hear what these two had to say, and they wanted to read their books. And after the loss of the signing table in the bookshop had been resolved, a good time was had by all. Especially Maria’s Polish fan who had come all the way here, and who’s responsible for people in Poland reading Maria’s books. It’s the kind of thing that warms the heart.

As Deirdre said, we must respect people’s voices, give them space, and we have to remember we are all human beings. 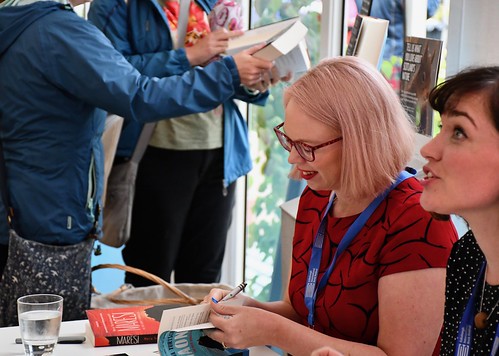