Hugs, love, and cuddles to all.

Today’s three picture books are adorable, each in their own way. Hugless Douglas is almost sensible. You can have a star for a pet. Sort of. And I’m sure you can really cuddle a crocodile, especially between shapeshifters.

Diana Hendry’s You Can’t Cuddle a Crocodile, about the boy with a sister who is always something else, be it a monkey or a bear or the uncuddleable crocodile, keeps the reader on his or her toes. But we can all pretend, can’t we? If it is pretend. Those parents do look a bit funny. 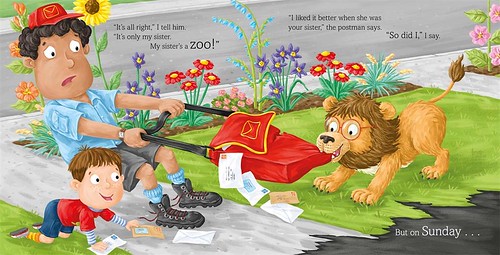 Whatever the situation is, the animals are nicely drawn by Ed Eaves.

In Corrinne Averiss’s My Pet Star, the tiny protagonist discovers a star one evening. It has fallen and hurt itself, but is picked up, cuddled and nursed back to health. The star is a lovely pet, apart from not being around in the daytime to eat ice creams in the park. The two grow close until the day comes when the little star needs to go where stars go. 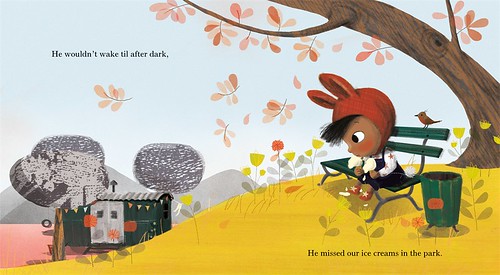 Sweet illustrations by Rosalind Beardshaw. I could want my own pet star.

Hugless Douglas is attacked by a bird’s nest, when it falls out of its tree, with eggs in and everything. Doing some egg-sitting while mummy bird gets a new nest together, he finds he needs advice and help. But that’s what bunnies are for. You can cuddle eggs warm, and when you do, well… 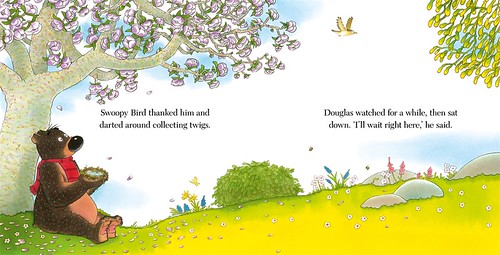 David Melling’s Hugless Douglas and the Baby Birds seemed even more adorable than the usual Douglas. But at least he didn’t sit on the eggs!

All three books make you want babies and toddlers to read to.

It’s OK not to be purple with shiny scales. Even if you’re an orange dragon with sticky-out scales, all is not lost. There is bound to be some princess out there who needs you. Even princesses can be a little different, sometimes.

At first Rachel Valentine’s story Marmaduke the Very Different Dragon, with rather orange illustrations by Ed Eaves, struck me as too ‘princessy.’ But when I read it I realised it’s actually rather sweet. Marmaduke finds himself an unusual princess, who is just right for him, and that makes both of them very happy.

Let’s leave the perfect purple dragons to the perfect little princesses who need protecting. Marmaduke’s Princess Meg is a brave girl, and she doesn’t need to be protected.

She needs a friend.

When Ruth Eastham texted me to say she and Ally Kennen had arrived at Manchester Piccadilly, I looked carefully at the people coming up the escalator and found myself staring at Philip Caveney instead. The ladies were not far behind, but I think it was Philip’s job to identify one lone Bookwitch from the milling crowds. He did, and then left for home.

Ruth and I had been plotting for weeks to meet up, and when she told me Ally was coming along it made the deal even better as far as I was concerned. I’ve seen Ally several times without plucking up the courage to say hello, and here she was, actually wanting to meet me.

I had to do that thing I hate; admit to not having read a single book of hers. She, and her books, have scared me somewhat, but Ally assured me nothing bad happens in her books. So maybe..? Certainly, Ally the person is very nice. Believe me. She had gone along to the Oldham Brilliant Books for the fun, and to have a night’s un-interrupted sleep.

She was a bit green, however. The taxi they’d come in had not been of the steadiest sort. So Ally drank a glass of water, and watched as I had some pretty good gnocchi while Ruth showed what she’s made of by going straight for the tiramisu, the taxi ride notwithstanding.

Now, I’d obviously planned to talk about Ruth and Ally and their books, but the tables turned quite early on and they found out more about me than makes sense. Although we interrogated each other to a suitable degree, and I reckon both Ally and I want to gatecrash Ruth in Italy, where she lives.

Ally had a train to catch (we all did, but hers was the first), so she left Ruth and me to discuss Ruth’s next book. (Speaking of next books, I think Ally’s next one sounds relatively safe.) I warned Ruth about all the things she doesn’t want to put in her book, and she took notes…

We enthused about war, which we both like. In books, if not in real life. And because Ruth was going off to spend 24 hours being an ‘exciting and famous aunt’ I dispatched her to a train leaving from the furthest away platform, with a mere five minutes to spare. Hope she made it.

I had more on the agenda, so went for my own train and spent a little time resting at home.

After some tea I gathered my camera and current book and walked over to the hotel used by the authors coming to the Stockport Book Award to see if I could catch up with some of them, since Wednesday was awards night at the Plaza. Using the same list of books as Oldham, it meant that some of the winning authors were also the same.

Hence I saw Caryl Hart again, looking fabulous in her ‘partydress’ complete with crown and everything. (This year’s theme was crowns and coronets.) She was accompanied by Ed Eaves, the illustrator of How to Grow a Dinosaur, and he wore a fantastic crown that he’d made himself. It’s that artistic vein.

The other winner waiting to catch a taxi to the Plaza was Clare Chambers, author of Burning Secrets. This year there have been many winners in Oldham and Stockport who I don’t know at all. It’s good to meet new people, but above all, it’s great that more than the obvious, well known books get an audience and new readers.

As far as I know, the other winners were Patrick Ness and Jim Kay, again, with A Monster Calls, and Clive Goddard and Fintan Fedora the World’s Worst Explorer. I hope neither Clive nor publicist Sarah, representing Patrick and Jim, had got lost. I understand they were coming direct from Oldham. And I believe Philip Caveney – Stockport’s very own author – was also at the Plaza.

The library representative bundled ‘my’ three into a taxi, and I walked home, having narrowly avoided the Market Research event at the hotel.

It was Oldham’s first book award last night, and what a brilliant name Brilliant Books is! Queen Elizabeth Hall was teeming with beautifully dressed school children of all ages, and I must say that those authors who usually spend their days in lonely garrets scrub up really well, too.

As for your shabby looking witch, she was given her very own escort who did some excellent looking after. His name was Snape. Keith Snape. Not Severus. But anyway. (He’s older than he looks. Apparently.) He told me about the wonderful libraries in Oldham, and he is dreadfully enthusiastic about all sorts of things.

Twenty schools have participated in reading this first year, and the children came for a glittery night out at the round tables in the beautiful ballroom. The Mayor of Oldham spoke, and then it was Dave’s turn to look after things on stage. At least I think he’s a Dave. I didn’t catch his surname. He did a great job, ably assisted by young readers.

The names of the shortlisted authors for each category were read out by readers of that age group, followed by some very nicely done recorded readings from each book, along with an opinion on why that particular book was the best. (Like because the character had orange hair.)

Caryl Hart and Ed Eaves won the Early Years award for How to Grow a Dinosaur, and Caryl was there to receive the prize. She impressed Dave by reading her acceptance speech on her smartphone…

Oldham Youth Wind Ensemble played The Sorcerer’s Apprentice, before the titles of the five shortlisted books in the Key Stage 1 group were read out, by slightly older children, who in an egalitarian attempt to split the five titles, shared the last one between them.

Julia Donaldson and David Roberts won with Jack and the Flumflum tree, and our esteemed Children’s Laureate made up for having gone on holiday instead of coming to Oldham, by sending a video message, which included singing a song with her husband. Pretty good, actually.

Not wanting to be outdone (as if they would be!) the Wind Ensemble gave us the Drunken Sailor, and then it was straight on to Key Stage 2. I am pleased that Philip Caveney won with Night on Terror Island. It’s especially nice, because it’s a local award. Philip thanked his daughter for making him a children’s author, and his soulmate, who then ended up carrying his rather lovely trophy around for him.

Clive Goddard, who didn’t win, but who was there anyway, stood up to wave, so we know what he looks like. He wrote a book with the tongue-twisting title Fintan Fedora the World’s Worst Explorer. I agree with Dave; I don’t think I can say that too many times.

Before moving on to the Key Stage 3 books, we enjoyed a performance of Stanley’s Stick by young actors from Oldham Coliseum. The winning book in this category was The Memory Cage by Ruth Eastham. She gave a great speech, which partly consisted of reading us her first published poem, written when she was nine. Basically, we should be aware of our inner caterpillar. I think. We will eventually turn into butterflies.

By this time poor Dave wasn’t sure if he was even at the right stage, but he was, because it was the turn of the oldest readers (so much taller than the first ones) to announce that Patrick Ness and Jim Kay had won with A Monster Calls. Unfortunately they were running late with their homework, and had been given a detention so couldn’t be there.

Sarah from Walker Books read out a message from Patrick, who regretted that his nice suit wasn’t going to get its annual airing, and he thanked Siobhan Dowd, on whose idea the book was based. Another shortlisted author, Ally Kennen, was in the audience and we got a wave from her.

Dave said he’s happy so many children can and do read more than 140 characters, and then everyone thanked everybody else. Andrea Ellison, whose brainchild Brilliant Books is, spoke and listed all her helpers. She waved her plastered arm around, and I wasn’t sure how much she had used it to persuade people… She finished by asking the children to parade round the room, to show off their beautiful outfits and perhaps to get some restlessness out of the way by marching round to the upbeat music.

After which there was nothing more to do than buy books and chat to authors and give Lady Caveney advice on the Scandinavian languages and their differences. And seeing as it took me two hours to get there by public transport, I then decided I had to start working on my return journey. (Car would have been 30 minutes. Broom probably even faster.)

I feel honoured to have been present at the birth of a new award, and here’s to many more Brilliant Books!