Michelle Paver has done it again. She’s managed to persuade me that she’s really John Buchan and Erskine Childers in one, blended with a bit of Kipling. In Thin Air the reader is – once more – transported to the 1930s, and this time it’s to climb Kangchenjunga. And as if that’s not enough of an ordeal, the mountain is haunted.

Thin Air is an adult novel, but only just. There is nothing unsuitable for younger readers keen on climbing and adventure, and who don’t mind being scared by the ghost of Kangchenjunga. 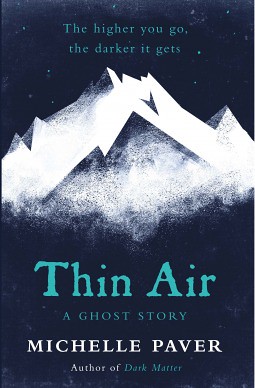 Dr Stephen Pearce is a last-minute replacement as the medic in the climbing team which consists of his older brother Kits, his brother’s best friend and two military climbers; one of whom is described as ‘a shade off in the vowels’ compared with these rather snobbish sahibs.

They are to follow the same route as a famous – but disastrous – climb almost thirty years earlier.

And, well, maybe they shouldn’t have.

This is such a marvellous tale of adventure, and you feel alternately exhausted by the climb and scared of whatever, whoever, is lurking out there in the snow. You admire the sherpas for their skills and patience with these strangers who call them coolies and yak-wallahs, and look down on the very men there to help them potentially become famous. If they succeed. Maybe even if they don’t.

The period feel is superb. As is the rising tension in the sahib camp.

You’ll not get me up there.

Dark Matter is a successful cross between The Riddle of the Sands and The Call of the Wild, set in Svalbard. Michelle Paver’s first adult novel was published last week, just in time for anyone wanting to frighten themselves a little for Halloween week. No, I lie, it’s for those who want to be thoroughly and properly scared witless.

Mentioning the books by Jack London and Erskine Childers is somewhat misleading, because they are more traditional adventure stories. Dark Matter takes the adventure story and moves it to Svalbard and adds ghosts.

Set in 1937 it has a great period feel to it. Jack gets the job as wireless operator on an expedition to the Arctic region, as the only working class man of the group of five who set out. To mention class may seem snobbish, but it forms an important backdrop to what happens.

The group begins losing members before they even leave. It’s very much a Ten Little N***ers kind of set-up. They are aiming for the remote Gruhuken, a long way from Longyearbyen.

It goes without saying that Gruhuken is haunted. The locals avoid it all costs. Or at least, they did until the Englishmen arrive.

Arriving in the short but light Arctic summer, it soon becomes very dark indeed. And the dark does things to you.

The Riddle of the Sands

Erskine Childer’s The Riddle of the Sands is a good example of a classic that has been made easier to “consume” by being turned into an audio book. I don’t know what possessed me to get it for Son, years ago, but I was right to, and he loved it. I’ve lost count of how many times he has listened to those cassettes while falling asleep.

We have since got the book for him as well, but it’s the reading by Anton Lesser, which is truly marvellous. Even now I can see my ironing stretching ahead when I think of the story, and I can smell the sea and I can feel the boat move.

The film of The Riddle of the Sands was on television a while ago, so I recorded it with Son in mind. We got tired of waiting for him to be home for long enough to watch it, so sat down and enjoyed it without him the other evening. As is usual with films, the plot had been simplified and altered, but it was still good. An interesting age, with a young Michael York and Jenny Agutter, in what was a period piece then too, set over a hundred years ago.

Try it on your boys.