I found I rather liked ‘The Polar Bear,’ aka Steven Camden, at Wednesday evening’s bookfest event. I knew nothing about him, but would quite like to read his book, Nobody Real. I imagine most people were there for Melvin Burgess, and he certainly didn’t disappoint. With them was late addition L J MacWhirter, and they were all kept in reasonable order by Agnes Guyon. (I do like the French way of pronouncing Agnes…) 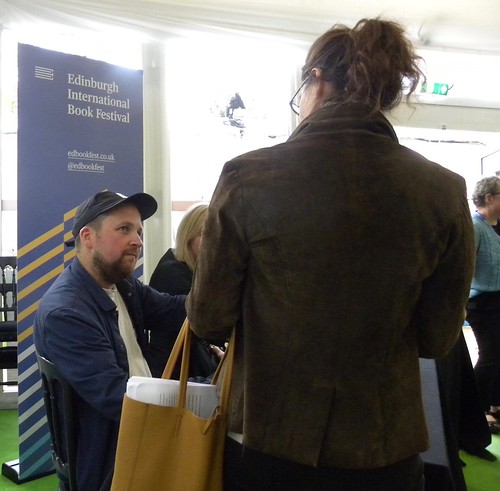 Not that Melvin was ever out of my good books, but I appreciated the way he said ‘I love witches.’ His new book is The Lost Witch, and the subject of witches was suggested to him by his editor. I think. And that led to him thinking through what a book about witches would be.

Before this L J volunteered to go first, so she read chapter 11 about the stairs…

Steven didn’t have room for imaginary friends, and this made Thor Baker – an imaginary friend – angry. He read the A-level scene from Nobody Real. Talking about change – the topic for the evening – he said that what’s good is what you add to a situation.

Melvin feels that for teenagers change is obvious, and that’s why YA is interesting.

Agnes wanted to know whether the panel considered themselves to be feminists, and after rambling for a bit, Steven checked himself and replied ‘yes.’ Melvin said you have to be careful, because we all carry our prejudices around. He starts with a male character and then does a sex change halfway through. (Not sure if this is feminist behaviour.) For his next book he’s got a black character, and a friend had explained what he could and couldn’t do. L J loved writing Silas in her book. He’s a bit of a Poldark, apparently. 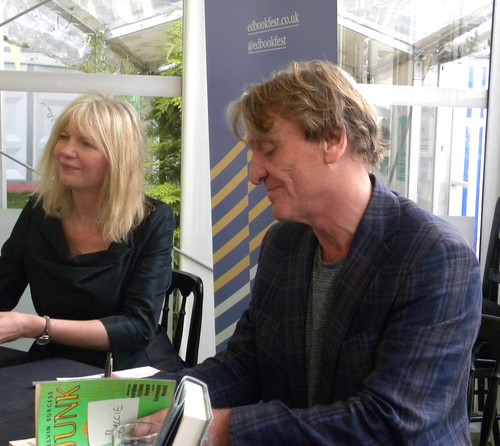 There were a couple of big names from the children’s book world in the audience; Julia Eccleshare and Ferelith Hordon. It was Ferelith who asked about morality in books. Melvin ‘objects to that’ and fears it might make you sound too pompous. Ethics, on the other hand, are interesting.

L J spoke of disadvantaged teenagers she had met, who wanted to do work that might not be an obvious choice for someone of their background.

Steven doesn’t know about morals. He’s ‘not a great believer in answers’ and prefers to trust his gut. Reading The Bunker Diary ‘messed me up for a week.’ (And then he asked the audience if we’d eaten. He was starving..!)

I’m not sure how we moved on to favourite books, but Melvin is very fond of Not Now Bernard, and Steven loves I Want My Hat Back.

For some reason this made L J mention dark books, which you want or things could get really boring. But after the dark, there should be hope. This might be from Geraldine McCaughrean, or it might not.

Can there be dark middle grade books? Ferelith told Melvin that his books are dark, and he said they aren’t MG, but she replied they are now, The Cry of the Wolf, Baby and Fly Pie (ending with a dead baby). He agreed this was a dark end with no hope.

Melvin doesn’t feel education has a place in novels. You go to school for that. You read about things [to find out about them] and that makes it private. He played around with the word ‘resilient.’ Teenagers can be too resilient = resilient to change. He sent us on our way, wishing us ‘good luck with the resilience.’