Not always hanging with the in-crowd, I only discovered Goodnight Stories for Rebel Girls, by Elena Favilli and Francesca Cavallo, when the Guardian wrote about its sequel. The not with the in-crowd comment could describe quite a few of the 100 females in the book, too. They did their own thing.

I’d have liked to read it to Daughter, many years ago. And Son. Let’s not be sexist about it. Instead, I had to surreptitiously read Daughter’s copy while she was at work. She ‘just had to’ buy it when she saw it at Blackwells in Oxford. I’d not been able to justify the £20. Or £40 for the two.

This is a book that only happened with the help of some serious crowdfunding. How typical! And also, how like the Rebel Girls themselves.

Some were helped by their fathers/families. Others did their thing despite them. It’s interesting how this runs like a thread through so many of the 100 tales of extraordinary women.

Some I’d heard of. Others not. Some I knew quite well, but not necessarily in this way. Others I was very happy to be introduced to.

In a way, I don’t like the tone. But I recognise it’s all written for – fairly – young girls [and boys]. And sometimes you gain something when simplifying a really famous woman’s story into words for a small child.

Also, not sure I agree with smoothing over some of the bad stuff some of them have done, nor occasionally really bad things that happened to them, like the assassination of three of the four Mirabal sisters. I believe even young children deserve to know.

What many of these women have in common is being told girls don’t do these things.

Actually, they do. They did, and they will continue to do it.

Whether the men are stupid, or jealous and controlling, I wouldn’t want to say. And I don’t really believe that boys now need a book like this for themselves, just to make it fair.

This is a book to dip into and learn from. Preferably in the company of a young person, or two.

Intriguingly illustrated by many talented artists, giving a new face to some of these rebels. The pictures alone could invite readers to spend a lot of time looking at them, and talking about them. 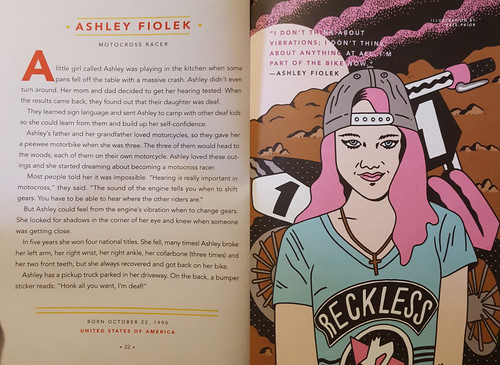