Wouldn’t it be nice to be an expert at lots of things? Except you can’t. There is a limit to how much you can delve into different areas of interest. And that’s when it’s good to have someone who does it for you.

Barry Forshaw knows a lot about crime (in the right sort of way). He is a Nordic crime specialist, but reads a wider diet than that. Here he is with his new Euro Noir, briefly outlining crime fiction and films in a number of European countries. I’m ashamed to admit I’d never considered whether there are Polish crime novels.

He wondered what I would make of the Nordic section, which is only right, since I know almost nothing about Romania or Greece when it comes to crime, or any fiction, now that I think of it. But if I did want to read something so drastically new, I now know where I would begin. With this book. And then one of the ones mentioned in here. 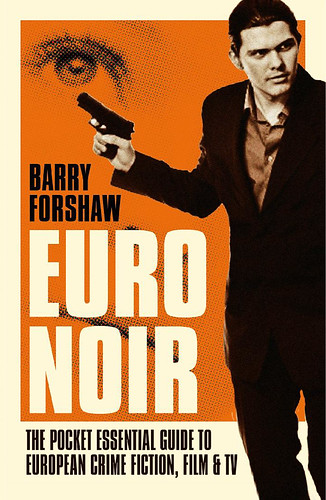 Barry is right to ponder how he can cover Nordic crime yet again and so briefly, but he has succeeded. There is a good selection of authors from a long time ago as well as now. And he does the same for the other Nordic countries. You might know a lot of it already, but I bet there will be something new for everyone.

And once you’ve covered the north, there is all the rest of Europe. If I were to tackle French crime I’d have to go to Fred Vargas. Barry very sensibly asked various specialists to write a page on what they like best, and my colleague Karen Meek likes Fred Vargas. That’s good enough for me.

There is a wide coverage of films, including some pretty ancient ones, and obviously the recent euro crime we’ve seen on television during the last few years. Again, you might know it all, but that doesn’t prevent this from being interesting to read.

Euro Noir is a short book, which will quickly tell you what you need to know.