Whereas I am all for reading anything that appeals, in whatever way – if only to be able to throw the offending book into the fireplace, George Mikes style – I don’t get why I’d annoy myself by reading an annoying book.

I think I’ve seen something similar from Sara Paretsky earlier, but a couple of weeks ago she reported on an email from a ‘fan’ who thought Sara was too negative about ICE in her most recent novel, Shell Game. I believe Sara is negative about the actions of ICE, but even if she isn’t, it would still be appropriate in fiction about the state of things today, to say bad things about the bad things that occur.

Sara wrote this after taking part in a rally in Chicago, ‘to highlight opposition to the U.S. government’s detention policies and methods. One person had brought photographs of the children who’ve died in these border prisons, most of them alone, separated from their parents.’

We have to be grateful we have authors who care about these things, and who can put some of that which is wrong into fiction, making it known to more ordinary people. She hopes her writing is a bit like that of Mrs Gaskell’s. I believe it is.

And with every move my adopted country takes in the wrong direction, I am glad we have people who will speak out like this.

This ‘Idiosyncratic A-Z of England and Englishness’ was put in the get rid-of-pile during our last clear-out of books. The grown-up books.

We decided we’d grown up, and away, from this previously much enjoyed volume by Godfrey Smith. The book is over thirty years old and the information in it pretty out of date. Much of it can presumably be found online if you need to look anything up.

So I decided I’d blog about it and then bin it. Sorry, probably meant Oxfam it. Not sure. Once we might have known who Godfrey Smith was. I have a feeling we did. 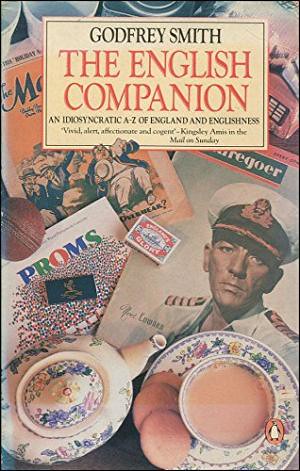 He did [does] have a nice way with words, though, both the selection of which ones to include, and how he explains them. Much of this Englishness I have discovered for myself, in real life. You know, make a child call you mummy, and then wait to see what they do a few years into your relationship. Awkward, is what it is.

Afters versus puddings. Or sweets. He quotes George Mikes a lot, and that is definitely good. The English are interestingly quaint.

There are not very many words or names to look up, which in my opinion is an admirable way to go about things. You can so easily have too much to find out about.

So in a way this re-visit to my past didn’t go as planned; quick look-through followed by bye bye. There are problems if I am to keep the book, however, as it is literally dying in my hands. The spine is collapsing and the pages are fluttering loose, and I suspect that any subsequent reading wouldn’t be much fun.

How to be an Alien

I know. I blogged about How to be an Alien before. I love George Mikes, and particularly that book. And I feel that maybe we need more of that kind of thing. (Mine is the 24th impression, from 1978.) 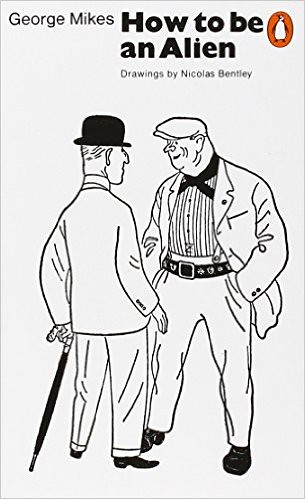 Except, perhaps it’s now an unsafe topic of conversation? As George points out, ‘Do not forget that it is much easier to write in English than to speak English, because you can write without a foreign accent.’ Yes. My smallish vocabulary can always be blamed on my choice of writing style; pretend I prefer plain and simple. You can’t hear me.

How times have changed. George reported being told by a very kind lady ‘you really speak a most excellent accent without the slightest English.’ Don’t we all? Now though, I wonder what any kind lady is likely to say under similar circumstances.

Where are you a foreigner? Those of us who are here, would generally like to believe that in our own countries we wouldn’t be, and that this misfortune would befall the British instead, but according to George Mikes this is not so. Or more correctly, was not so, but I’m guessing many British people are not foreign even when they go and live in Spain. George was upset when he was informed that his much ‘loved and respected’ mother was a foreigner, back in her own Hungary.

I used to believe I knew and understood everything in How to be an Alien. England was charming and amusing, and you could smile fondly over her, as you would a toddler.

When I first read the book, I had never heard of Princes Square and Leinster Square in London. The whole idea seemed preposterous. Then one day I discovered I was staying in a hotel in one of them. Or was it both?

These days I tell people I live at no. 4 and that it’s the house between nos. 3 and 5. This needs to be pointed out or casual visitors may end up on the other side of the road.

Anyway, I used to reckon all I needed to do was learn how things are done here and I’d be fine. Now I find that I am taken aback by how normal things are in – to me – hitherto unknown countries on the continent, and how much I have changed over the years.

But I do feel queueing is a fair way of doing things. And I’d like to hope that the humour in George’s book will be appreciated by most people.

‘I believe, without undue modesty, that I have certain qualifications to write on “how to be an alien”. I am an alien myself. What is more, I have been an alien all my life. Only during the first twenty-six years of my life I was not aware of this plain fact. I was living in my own country, a country full of aliens, and I noticed nothing particular or irregular about myself; then I came to England, and you can imagine my painful surprise.’

This, unfortunately is not my own wit, much as I’d like it to be, but it comes from George Mikes. I just couldn’t resist the quote, as he and I seem to share some ‘alien details’.

It’s been hard for Offspring, having to go round admitting to having an alien at home, but these things happen.

I think there is a book called something like ‘My Mum’s an alien’, and how true that can be.

These alien thoughts began with Daughter feeling in a chocolatey mood, with no chocolate in the house. I introduced her to a chocolate sauce recipe (alien, needless to say), which she made, and then I put the leftovers (yes, there were leftovers) in the fridge. (It says in the alien cookbook to do that.) Some days later we needed a carving knife to tackle the sauce with. It’s not the recipe’s fault; Daughter ‘adapted’ it slightly.

As we stabbed the sauce with the sharp knife, I was reminded of George Mikes. On a hot day his wife made some cold coffee and put in the fridge, where it froze and became solid. She also happened to leave some cheese on the kitchen table, where it melted. ‘So I had a piece of coffee and a glass of cheese’, is how George Mikes sums up how he ruined a perfectly nice English wife with his alien ways.