It was a toss-up between my pasts; Nordic Noir or Brighton Rocks? I went with the Nordic boys, but didn’t admit to having been to Öland when Johan Theorin asked. It was a long time ago and I prefer to remember it as a summer paradise, and not one of Johan’s bleak crime settings. 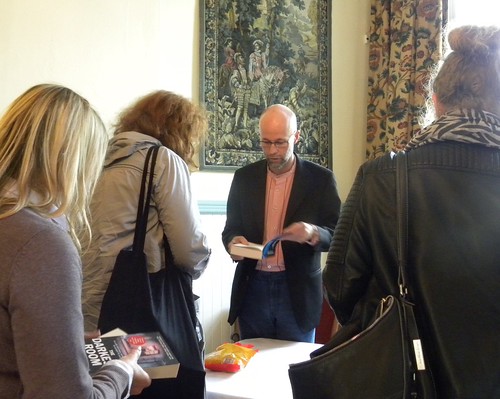 Chair Miriam Owen did a good job, only slightly dishing out criticism at men who eat yoghurt with cinnamon, which apparently no Scottish male in his right mind would do. Well, maybe not.

They are all bleak, in their own way. Apart from Johan’s Öland, we have Gunnar Staalesen’s Bergen and Ragnar Jonasson’s northernmost town in Iceland, where the sun never appears in winter, and the tunnel in might become blocked by an avalanche. Although, he professed to being an Agatha Christie fan – as well as being her translator – so he’s probably all sweetness, really.

It seems that 50 years ago there were no murders in Iceland. They only arrived with the crime novels, so we know who to blame. Johan is hoping there will be a trend that brings new Nordic crime from recent immigrants, and he mentioned how humorous they’ve become in Sweden… (That’s not why people like you, you know!)

Apart from Gunnar’s Spanish translator who felt he had so little food in his novels that he added some for him, there is food in them books. Ragnar does pizza a lot, both for himself and his characters, but his UK editor required more Icelandic fare, so he had to edit his food. Johan tried to explain kroppkakor, but I think we do well to stop at slaughtering the right pig.

Do they work closely with their translators? Well, Ragnar was sure he knew how to translate a book, so helpfully corrected a friend’s work, all in red. Johan’s translator corrects his mistakes, not vice versa. Gunnar has the excellent Don Bartlett, so finds he has to go back to his Norwegian original and alter things he’s got wrong.

And there’s an explanation to the cinnamony yoghurt. It’s not yoghurt at all, but filmjölk, in which case the cinnamon makes sense, and any man should be proud to eat it. 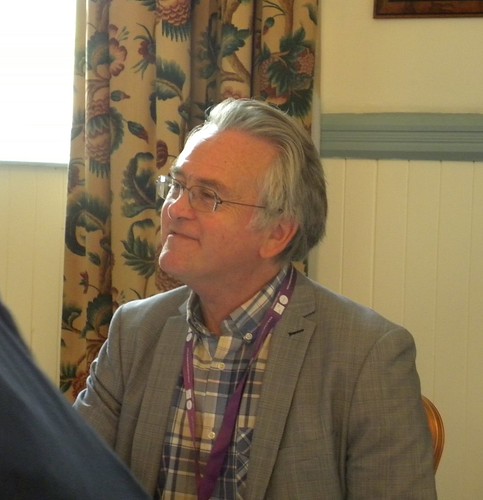 Gunnar had been incensed by ‘his’ films. They put an actor speaking in an Oslo accent to play Warg, who has a very strong Bergen accent, and believe me, even a foreigner like me can tell the difference. Johan feels it’s like sending your child out into the world. You just want to go along and hold their hand.

The Norwegian Easter crime trend was explained. Everyone goes to their second home for ten days at Easter. Everyone wants to read crime when they do. So, lots of published crime, easy to carry up that mountain to your cabin. In Iceland you get your books for Christmas instead. Everyone has to read a book on Christmas Eve. Gunnar said it’s those dark night which make Nordic readers such prolific readers.

Gunnar likes red herrings, and in case his readers see them coming, he then adds a green herring for good measure. Johan had been in danger of making his books into tourist brochures, but his translator pointed out they were not. And Ragnar feels it’s best to write for the Icelanders, and offer no explanations. The reason Nordic crime on television has been so successful is that they are very well written. 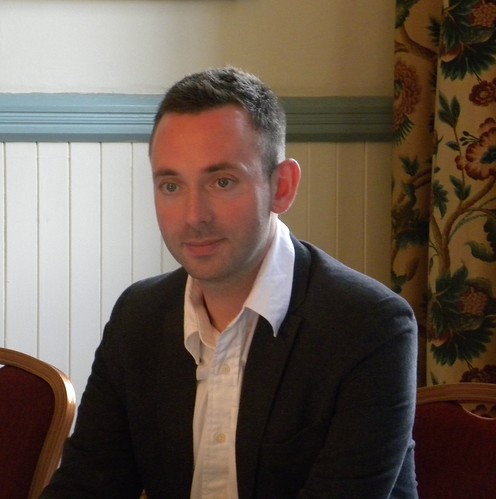 Who would they themselves go and listen to this weekend? Gunnar likes Ian Rankin, Val McDermid and Philip Kerr. Ragnar goes for Peter May, while Johan extolled the writing of James Oswald.

I had a pot of builder’s tea with Roman crime writer Lindsey Davis first thing on Saturday morning. Well, Lindsey had coffee, but her publicist Kerry and I had Very Strong Tea. It was Kerry who suggested I’d love to meet Lindsey, and how right she was! (Kerry usually is.) I’ll tell you more about our chat in a later post, but I have to mention what a beautiful purple coat Lindsey wore. (Apparently she owns matching colour boots. My kind of woman.)

There was some talk about the Nordic authors who had been offered pickled herring for breakfast (obviously to make them really feel at home), when all they wanted was a good old British cooked breakfast. Rollmops, anyone?

We also talked about Kerry’s lovely dog, which I met last year, and this led nicely to the serious matter of shopping. After our tea, and coffee, we hobbled separately down the hill to the Albert Halls for Lindsey’s event. 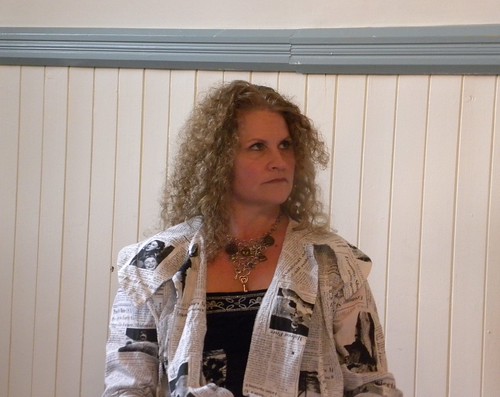 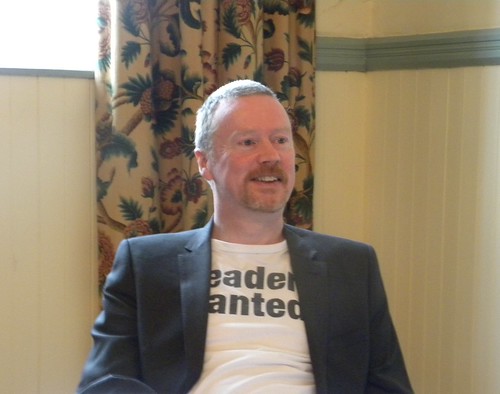 Since there is no sense in not photographing signing authors when they’re available, I grabbed pictures of Alexandra Sokoloff, Allan Guthrie, Lin Anderson and Val McDermid, all of whom worked the early morning shift. 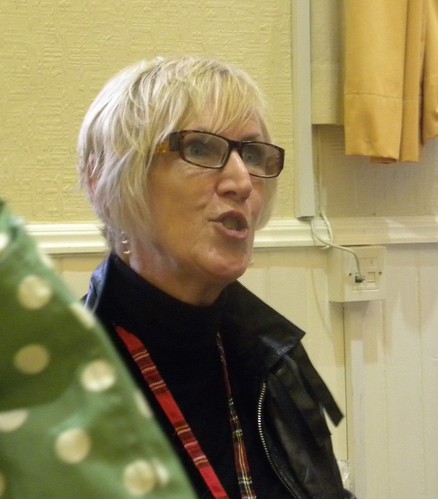 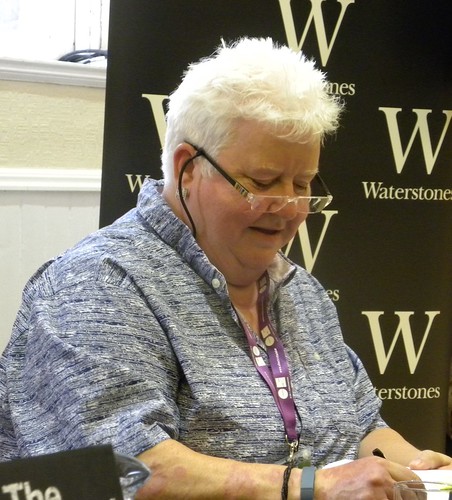 Then it was on to Lindsey’s event with all the civil servants. I’ll tell you more later. To my great surprise I found Blackwell’s allrounder Ann Landmann safely outside the onsite Waterstones, wearing a Bloody Scotland t-shirt. Seems she can’t get enough of book events and festivals. 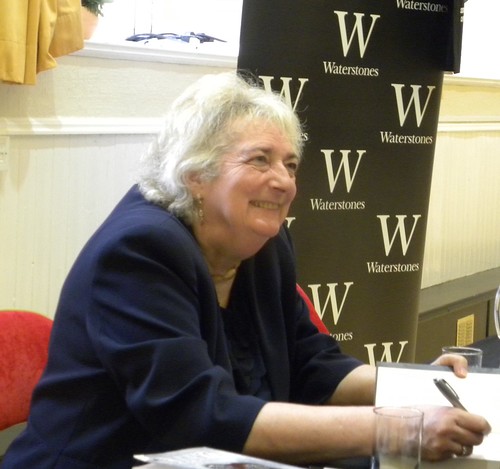 As I was going about my business taking photos of Lindsey, while discreetly ignoring the fact that Ian Rankin was sitting in the café, I encountered a surprisingly soberly dressed Kirkland Ciccone, who’d brought a friend there as a birthday present. For her, not for him. 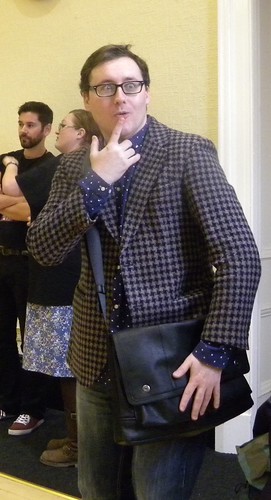 It was still raining so I ate my sandwiches in the bookshop, as discreetly as I could. I checked out Lindsey’s books and decided they look very nice indeed.

Still in the rain, I walked back up to the Stirling Highland Hotel, passing the man with the interesting shoulderbag strap. I recognised the strap first, and the rest of him second. Caught a glimpse of James Oswald on his way down, as I puffed uphill.

Had plenty of time after that so went and sat in the bar, reading and looking at people. Ann Cleeves came in, and I spied publisher Clare Cain – she who drives Plague Doctors around Edinburgh. Went to my afternoon event on Nordic Noir, before starting on my last downhill trip for the day, conveniently finding James Oswald in the car park, so I stopped and chatted. Good thing, as I’ll be running again after his Sunday event.

Not exactly running, but you know. 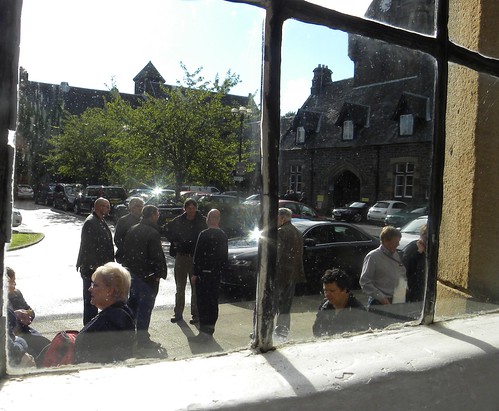 According to my informant, someone who shall remain anonymous, asked Ian Rankin if the reason his early books have not been translated into Swedish is because they were so bad it wasn’t worth the effort. I believe Ian’s reply was reasonably polite. Anon then suggested it didn’t matter because Swedes only want trashy crime to read on the beach.

I’m afraid this secondhand information about an author event in late November is really very late. How I have nagged my informant! Finally nailed him down before dinner last night.

It seems Edinburgh didn’t receive just a Christmas tree from Norway, but crime writer Gunnar Staalesen came over for a chat with his colleague Ian Rankin. It was organised jointly by the university and the Norwegian consulate. And the people with the tree.

Gunnar spoke to students at the university in the morning, before a public event at the Scottish Storytelling Centre in the evening. Jenny Brown moderated and I gather that Gunnar’s translator Don Bartlett was there as well. Don translates from Norwegian despite not speaking the language, and he can finish a book in just a few months.

Since I can’t compete with this very excellent piece in The Scotsman, I won’t try. For facts about Gunnar and his Bergen detective Varg Veum, who is a sort of Norwegian Philip Marlowe-Lew Archer-Sam Spade type, you can pop over and read the interview.

I understand that wherever Gunnar goes in Bergen he is stopped by people wanting him to commit murder in their street. Must be their Viking genes.

And I do wonder if he’s hinting at doing away with his ‘Wolf’ detective, because he’s too old. Varg Veum, not Gunnar Staalesen.

Ian Rankin can always murder a Nordic citizen next time, if he feels like it. Otherwise I believe a good time was had by all.