At first I was a little disappointed that Imtiaz Dharker declined becoming our next poet laureate. I half felt I knew her – after a meeting over a signing table! – so that would have been good. Another woman, and one from an outsider kind of background. But I can see why she felt she couldn’t accept.

Carol Ann Duffy has over the years become a very familiar figure, through our shared Manchester connection, MMU and the Edinburgh Book Festival.

But Simon Armitage is the next best thing. At least he will be when I can manage to remember his name and not call him Richard. We have a ‘connection’ to Simon as well. Daughter really liked his poetry at school, so I bought tickets for us to see him at the Manchester Literature Festival one year. We got as far as our home station, by which I mean the platform opposite the former Bookwitch Towers. There we decided not to go after all, so turned round and trotted home again.

[According to the Guardian] it seems that Simon comes from a witty family. His parents burst into tears when they heard the news about him being the new poet laureate. ‘I got a text from my dad later saying “We’ve stopped crying now. — If your grandad had been alive today, this would have killed him”.’

Let’s go home, shall we?

Where is home? For any of us?

Now that so many people have lost all inhibitions on what to say to perfect strangers, suggesting they go back where they came from, the answer isn’t all that simple, even if we wanted to, or could return. We’d need to break up families, of course, since out of a family of four, say, we don’t all necessarily come from the same ‘wrong’ place.

That would be cruel, but say that we accepted this? Many people have lots of little bits of origin inside them. Do we split into atoms, to send the bits home? My former, slightly Irish, but otherwise very English, neighbour did one of those tests to see where his roots came from, and found he was partly Sami.

Son’s theory is that people have always said these things, as often as they’ve been saying them during the last ten days. The difference is that now it’s being reported. He could be right.

A few weeks ago I wrote about the four female poets who were touring the country. This was before the you-know-what. In Saturday’s Guardian, Jackie Kay and Imtiaz Dharker wrote about the change since then. It’s interesting that it was the two darker skinned poets who shared their thoughts, although presumably Carol Ann Duffy is also noticing the change.

We have relatives [similar age to Offspring] with an Indian background, and here I must admit to some shortsighted thinking on my part. All I see are young and pretty girls; girls I know to be both intelligent and successful at what they do, as well as being lovely people. Middle class and with thoroughly proper English accents, acquired from attending above average posh schools. But they too are being abused when they go out. Always have been, apparently. And I was so naïve that I had no idea this was happening.

I can’t say I’m ashamed of my country, because this isn’t my country. But I would be if it was. And it’s only since the reports that a Swedish mother and her young child were told to go home, after being overheard speaking Swedish to each other, that I’ve begun to wonder if I need to curtail my public chats in foreign languages as well.

The Resident IT Consultant worries about the NHS, and whether the time will come when they won’t treat me. I went to see a doctor at the hospital yesterday, and was determined to stay under the radar. It took him two minutes to ask where my accent was from…

For a witch who claims not be be all that keen on poetry, it was quite a revelation to see the photo in the Guardian Weekend of four poets about to hit the road and cover the UK’s indie bookshops from the south to the north. Because I have actually met three of them, and I even own at least one signed volume of poetry by those three as well.

It’s only Gillian Clarke from Wales that I didn’t know. Carol Ann Duffy, on the other hand, comes from my old neck of the woods, as does Scotland’s new makar Jackie Kay. And Imtiaz Dharker I came across on that first visit to the Gothenburg Book Fair many years ago. (I was never quite sure how safe it would be to travel with her The Terrorist at my Table in my bag…)

Imtiaz is – according to Carol Ann – their ‘world laureate’ and that’s a pretty good title to have. As is poet laureate, of course.

I quite like the idea of these four ladies travelling the length of the country to read poetry in bookshops. My closest one is probably St Andrews, but that is still too far for a Saturday night outing.

Anyway, the fact that I have some of their work, might be an indication that these are very much user friendly poets, if that’s an OK kind of description. None of that feeling I had when I was at school, that poetry is boring, and pompous.

(Googling the article, it was suggested I might be looking for ‘pets’ and not poets. Honestly!)

Mcbf, the end is near – for now

There has already been afternoon tea in Manchester. Today – on the last day – there will be more afternoon tea, and a quiz. I’m trying really hard not to mind.

While I’m busy not minding, I give you some more borrowed/stolen photos from the Manchester Children’s Book Festival. It is run (or do I mean organised?) by Kaye and James. They work very hard. By today they must be absolutely shattered. I know I am, and I wasn’t even there.

That’s why I will show you their happy smiles as they rubbed shoulders with the great and the famous this week. The one at the beginning was Curtis Jobling, who they worked pretty hard. Here they are with Curtis and his hat. 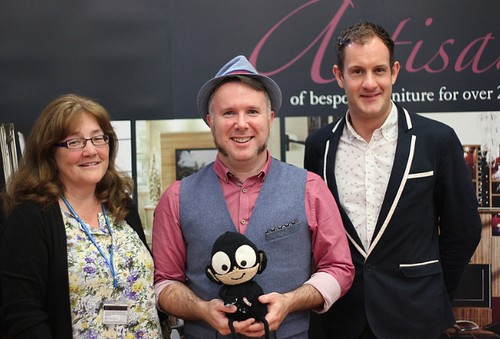 Then James seems to have got Sufiya Ahmed to himself. 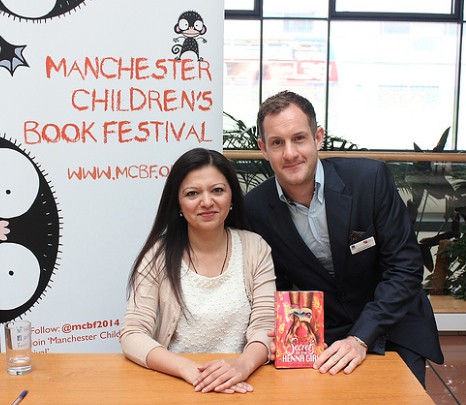 After which we see James wondering what on earth Kaye has to laugh about. Are they not there to work? Their boss, the Poet Laureate is looking on. 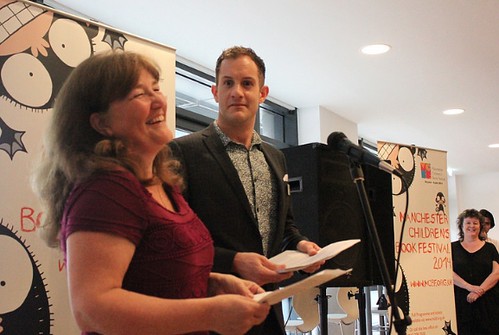 And look, here is James with his arms round Carol Ann and Kaye. He looks right at home. 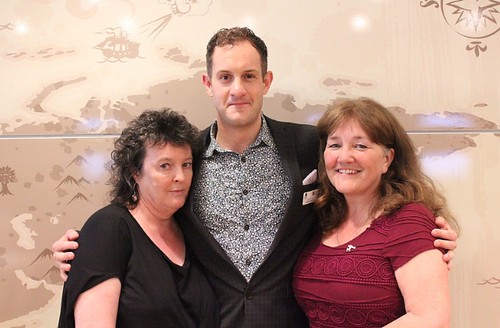 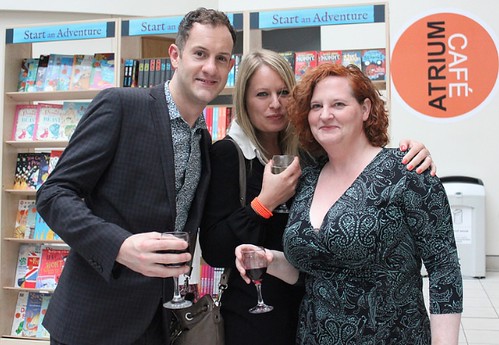 And with that Cerri Burnell off television. 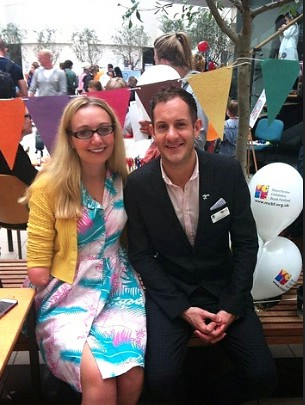 Then luckily we have a break from our pair, as Kevin does his fan stuff with Guy Bass. 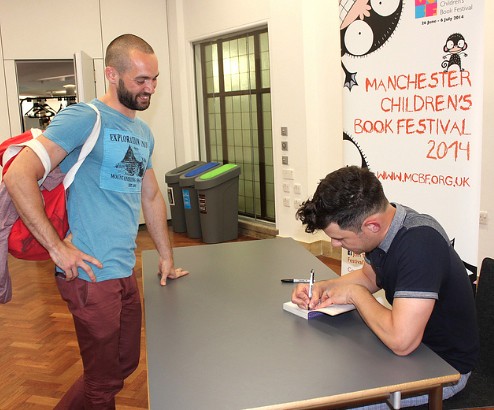 But then it’s back to more hanging out with authors, with Kate Pankhurst. James is testing out the intelligent look. 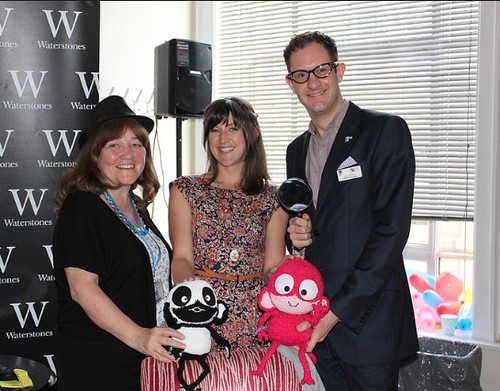 Next is Justin Somper with our hard-working couple. 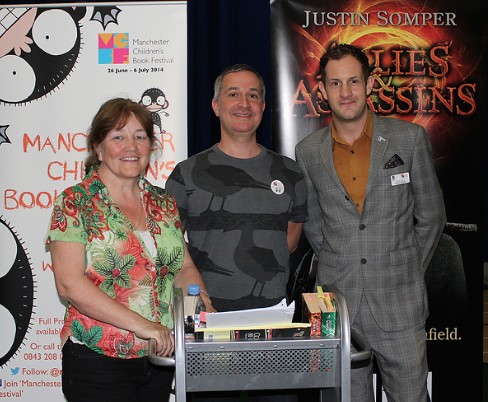 Imtiaz Dharker speaks at the poetry event. Proper grown-up it looks, and no Kaye or James. (Though I’m sure they were there…) 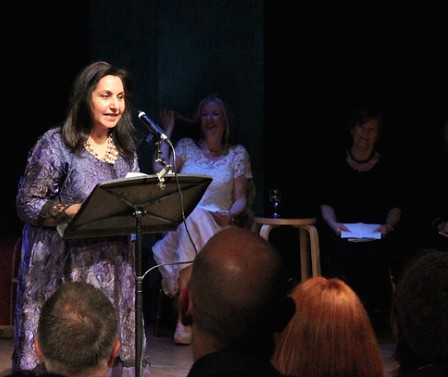 Andrew Cope is looking pleased to have avoided the camera happy organisers. 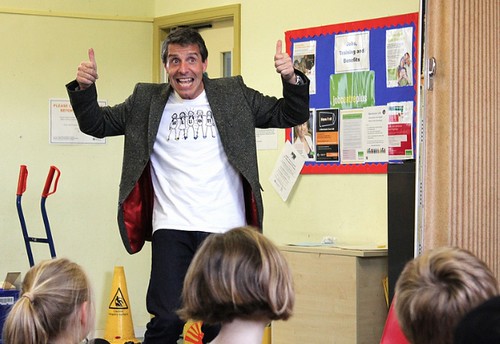 Oh no, here they are, back with Andrew. 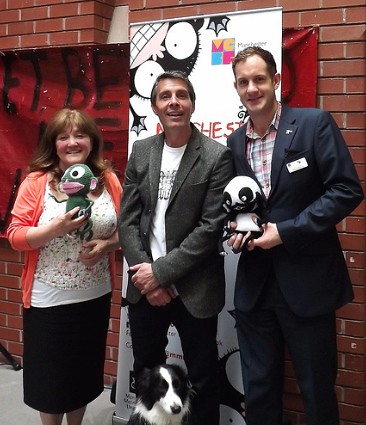 Steve Cole got the whole line-up of mcbf helpers instead. 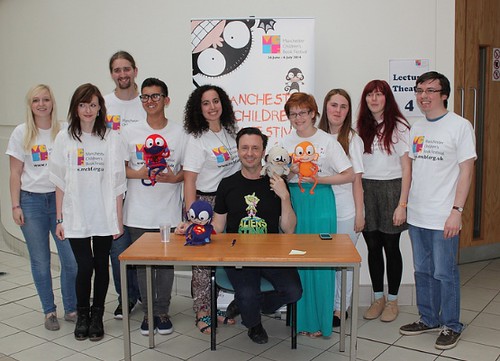 Cathy Cassidy and ‘her boys’ who, as I’ve said before, are among the nicest in children’s fiction. 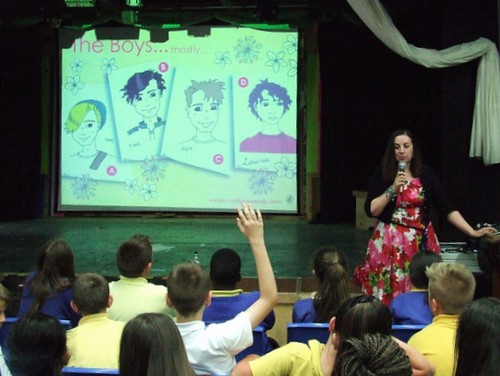 Former MMU student Liz Kessler was back with her pals Kaye and James. 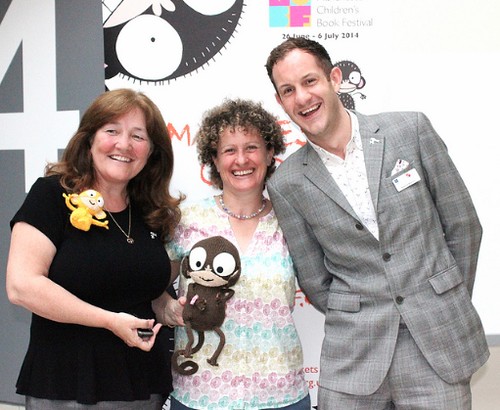 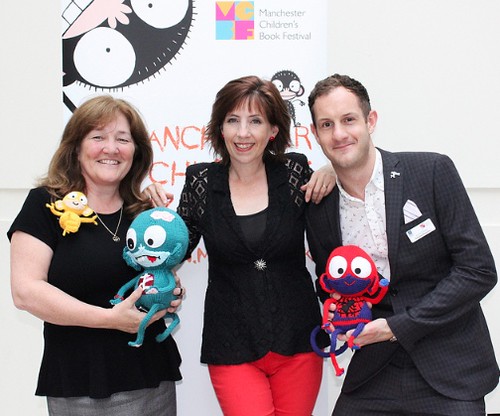 But you know what I’m really trying to say, don’t you? These two lovely people work, and work, and they organise a rather nice and most friendly book festival. They deserve to be photographed with their guests. They deserve the limelight. Because they do this so well, with an ever present smile on their faces. Well, two smiles. One for each face.

There was no witch to ask to see James’s socks this year. No witch to send to the back of the room. And no cake for the witch. Or tea. Or quiz, which I would surely have won. Had I been there.

(The photos are by the mcbf photographer. I simply smuggled them onto my flickr account, because earlier this week I produced a nice post which suddenly lost half it’s pictures because someone went and pruned the mcbf gallery…)

OK, so this is my second blog this week about laureates. It won’t come as a surprise that today it’s about Carol Ann Duffy, our new Poet Laureate. The papers are full of the news, but bandwagons are there to be jumped on, so why not?

I am as you well know, not into poetry. But I do own a Carol Ann Duffy. And it’s signed. In fact, we have two, because Daughter insisted on a poetry collection when we met this great poet a few years ago. Mine is Another Night Before Christmas, which I suppose is apt for someone named for Christmas.

Carol Ann Duffy probably qualifies as ‘children’s literature’ more than many other adult poets, seeing as you read her for GCSEs, along with people like Benjamin Zephaniah. I quite liked meeting her at the local bookshop, because she was surprisingly unsmiley, which is rare at signing events. (So are you more genuine if you refuse to smile?)

In today’s Guardian Review Carol Ann has chosen poems by other current female poets, and the non-poem-reading witch has to own up to actually possessing a volume of  poems by one of them, Imtiaz Dharker. Also signed. Something about terrorists, which I carried with me on planes a few times, wondering what would happen. (Nothing, is the answer.)

Now that everyone has exclaimed over the choice of a female, and gay, Poet Laureate, to prove how lacking in prejudice we all are, the question is who we can give the bottles of sherry to next time. A Martian?