I wish there had been graphic novels when I was young. I could be wrong, but I believe we only had comics. Which isn’t necessarily bad, but it would have been fun to have had access to the classics in picture form. There must have been many of us who’d never dream of reading one of those well known classic novels. The kind where you’d know the title, and you might have seen the film, but where you’d stop and think the book will just be too hard to read. Because it’s a ‘proper’ book. 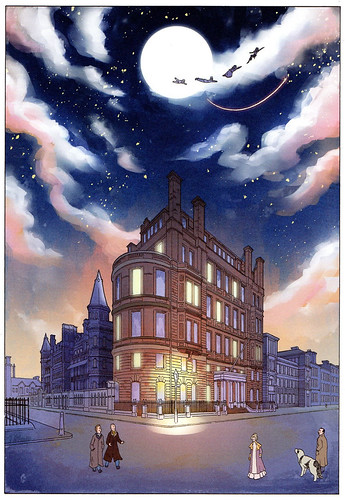 Now Birlinn have transformed Peter Pan into a beautiful picture story, adapted by Stref with Fin Cramb (what fantastic names!).

The illustrations are most attractive, and some of them I could sit and stare at for a long time. And if you read the whole thing, you get all of Peter Pan as well. 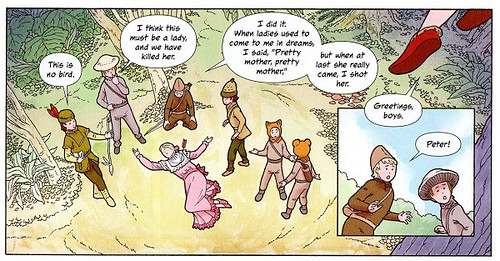 There was a launch of Sixteen String Jack and the Garden of Adventure at Moat Brae House this week. The garden at Moat Brae was the one that inspired J M Barrie to write Peter Pan, after he used to play with the boys who lived there.

Plans to create a new Neverland Garden at Moat Brae, in Dumfries, are part of a bigger scheme to have a National Centre for Children’s Literature and Storytelling, where children will be able to come and play in Peter Pan’s garden. Joanna Lumley is Patron of the Peter Pan Moat Brae Trust, and she’s excited by the new book, which will hopefully help them raise the necessary funds. 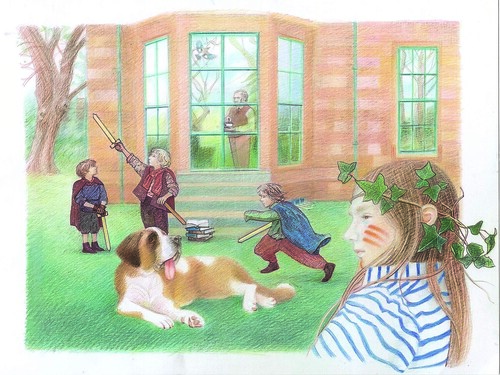 The book by Tom Pow and illustrator Ian Andrew is set in the garden as it is now. Daisy has come with her grandmother, who tells her the stories she used to hear from her grandmother, who was a maid in the house at the time J M Barrie came to play. Maybe. She’s fictional, but this picture book shows how child’s play might have influenced the creator of Peter Pan, all those years ago.

It sounds like a nice place to visit, so if I ever get down to Dumfries…

There is a certain freedom – not to mention a sense of adventure – in standing at a railway station as a train comes in, and you’ve got a trainload of alighting passengers to choose from. Who to go and ‘have coffee’ with. Well, to be truthful, I had already googled Sally from Birlinn, so I had an idea of who to look out for, and she knew to find a short, fat witch. And she did.

Sally was coming all the way to me, to talk about the many good children’s books Birlinn – who are an Edinburgh based publisher – are about to let loose on the world this year. I walked her to the Burgh Coffee House, as she confessed to earlier youthful trips to the Rainbow Slides in Stirling. What’s more, she came here from Linlithgow, and the less said about this lovely place and me, the better. (Actually, Sally has more or less sold me on the town, now. It has a good bookshop just by the station, apparently, so as long as I manage to get off the train in the first place…) 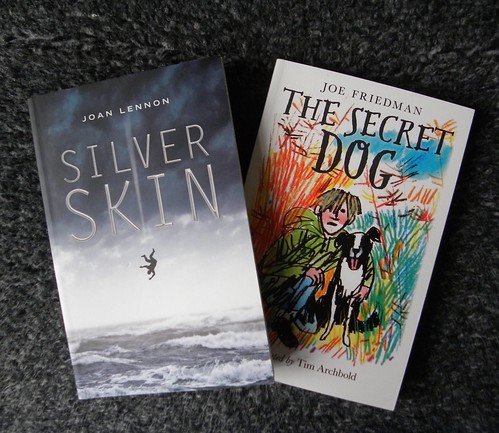 So, Birlinn. Sally brought me books by Joan Lennon and Joe Friedman, which both look promising. She talked me through their whole 2015 catalogue, and plans include a Peter Pan graphic novel, books by Alexander McCall Smith about the young Precious Ramotswe, history by Allan Burnett, the Polish bear Wojtek, Lynne Rickards and the ever orange Tobermory Cat by Debi Gliori. There will be poetry and there will be naughty young lambs.

The books all have some connection to Scotland, be it setting or author or anything else. I knew it already, really, but it’s worth saying again, that Scotland has books all its own. It’s not just an appendix to England. If Norway can have a publishing industry, then so can Scotland.

There was a bit of gossip, too, and a secret that can’t be mentioned. And after that Sally ran for her train back to the big city, hoping that someone else would have done all the work by the time she got back to the office.

The advertisement for books for a child for Christmas; which books should it contain? I was happy to stumble upon an ad that seemed to recommend good books. And it did… but it was from The Folio Society, which sells expensive editions.

And what they suggested were classics. The kind the giver and/or their parents, and grandparents, used to read. When you see a suggestion like that you often think that’s all there is. Or you are likely to, if the only ‘new’ book you’ve heard of is Harry Potter, who will soon be joining The Wind in the Willows, Peter Pan and Wendy, The Hobbit, Ballet Shoes and Hans Andersen’s Fairy Tales as a classic read.

The kind of book well-meaning adults go on and on about.

At the other end of the scale you have the books ‘everyone’ has heard of, but which don’t necessarily need advertising to sell. Jacqueline Wilson, Horrid Henry, David Walliams, Wimpy Kid. They are all fine! But like the books above, they are obvious choices.

Could we have an ad like The Folio Society’s ‘Best books for kids this Christmas’ that might mention slightly less famous books (and that could also mean the recipient is less likely to have a copy already), but ones that are so very good in a general sense that few children would dislike them if they got them for Christmas?

As The Folio Society ad says, it’s good to leave children alone to read. I’d just like them to have something more recent than what grandad liked when he was a little boy. Considering the books in the ad, they will be aiming at the age group between seven and twelve, roughly?

So, let’s see. Eva Ibbotson. Very reliable choice. What do we think of Michael Morpurgo? I find he is less of a household name among mature buyers than you’d think. Perhaps one of his less famous titles. Philip Pullman. Again, some of his less well known books, so not HDM.

I’m rambling, and you are thinking I’m picking famous names. But away from our select and relatively small group of adults who like children’s books and know about them, I hear people chatting about my big heroes as though they are minor players or newly discovered small fry. Good, but not gods. I have to stop myself from bashing their heads in. (Figuratively.)

How am I doing? I’m avoiding picking those authors whose work might be best aimed at a particular age or sex to be successful, however excellent.

By the way, do children still enjoy The Wind in the Willows? Or is it now more of an older person’s choice, rather like Roald Dahl?