It’s time for the 10th Inspector McLean novel. Or Detective Chief Inspector as we now need to address James Oswald’s Tony McLean. There’s been a promotion or two along the way since we first met him. And in a way, this doesn’t suit our Tony. He’d rather be out doing than dealing with the overtime of others, or for that matter, the politics of getting on with his superiors. 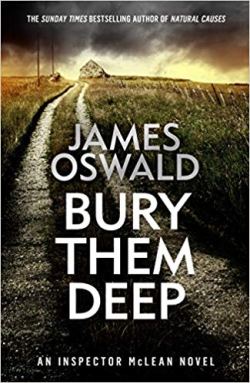 I have missed the last two books due to the fact that James insists on writing new ones every year. I was afraid I wasn’t going to be able to keep up, but apart from everyone having been promoted since I met them, they are mostly the same. No MacBride, and some of the bosses are retired, but still rootling around in the basement.

It helped that we revisited an old bad guy I’d come across before, and that I remembered both him and one or two other old cases that got a mention. I’m guessing some of the bad guys were so deliciously bad that it was worth going a second round with them. Though my use of the word ‘delicious’ might not be in the best of taste…

Ahem. Well, this is another ghastly tale set somewhere in and near Edinburgh. We meet the victim early on, and when that happens, it usually means they will come to a sticky end, and that we’ll be right there when it comes. There is some supernatural stuff, again, which you just can’t explain.

Ordinary poor thieves might be bad, but they have nothing on the much better off bad guys. The ones who normally get away with it.

And it’s hot. Tony is still badly dressed for what he is doing, but this time it’s not the lack of gloves that gets to him. But it seems that the police mustn’t cavort around in shorts and t-shirts, while others wear nothing at all…

Well, he was. The Resident IT Consultant is now safely back from his Kanadian adventures. (Sorry about the Ks. I got a bit karried away, what with Swedish and German and all the rest.)

He decided he wanted to go and see his relatives over there, so he went. I was allowed to come too. I just didn’t feel up to it. Besides, there is so much a witch can get up to when all alone in the house. I suspect he still hasn’t found the things he’s not found yet. And it’s been a couple of weeks, so I no longer recall what I hid where.

Just like when Son went the first time, there were cousins to see. An uncle. Even a brother, if you allow for the US detour. There’d have been another uncle, but he very sensibly decamped to New Zealand. Cousins once removed (which is a really odd way of putting it).

They looked after him well.

After all, I sent along books as bribes. I chose several of my favourites, mostly with some sort of connection to Scotland, to possibly entice some of them to come and visit us. Gruesome murders is a sure way of tempting people to come. I don’t remember all my choices, but James Oswald was there, as was Elizabeth Wein and Catriona McPherson. And naturally Meg Rosoff and Hilary McKay for a bit of comfort reading.

There were oatcakes too, but I imagine the books were the best.

And when they’d swapped their Grandfather’s jigsaws with each other, the Resident IT Consultant escaped across the border near Niagara Falls. Really fishy visitors obviously walk across, and here he is, looking surprisingly all right for a man who never selfies. Anyway, he’d have needed extra long arms for this one. 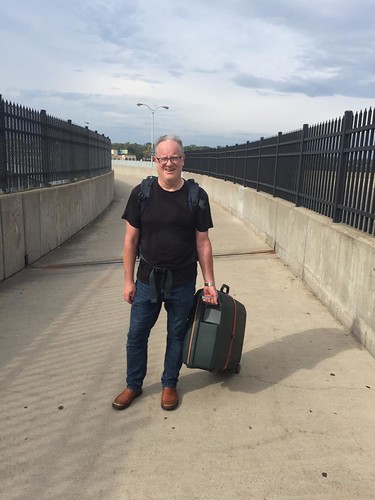 At least it rained on the last day 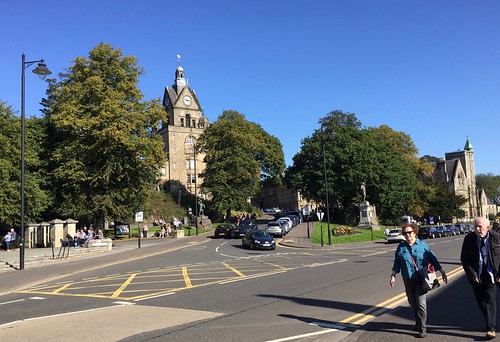 You can have too much sunshine. Or can you? Well, this time of year in Scotland it is usually quite welcome. Makes you feel summer isn’t quite over, and you can forget that it will be Christmas in three months.

Actually, I don’t know where that thought came from. I don’t want to think about it.

But it was nice while it lasted, even if it did rain when people woke up on Sunday, for the finishing touches of Bloody Scotland. The sun somehow makes it easier to chat to people, to hang about, to enjoy yourself.

I could easily have stayed on outside the Golden Lion on Saturday night, as I waited for my chauffeur to pick me up. It was balmy and pleasant, and none of that September chill after the sun has set. I almost did have to stay, as the hotel walls – or whatever caused the block – wouldn’t let my call through to the Resident IT Consultant to come and get me. I had to go outside before those telephone lines started connecting up.

Lucky for me, because when I went back inside to wait I discovered James Oswald and went over to bother him for a few minutes. He was very polite about it. 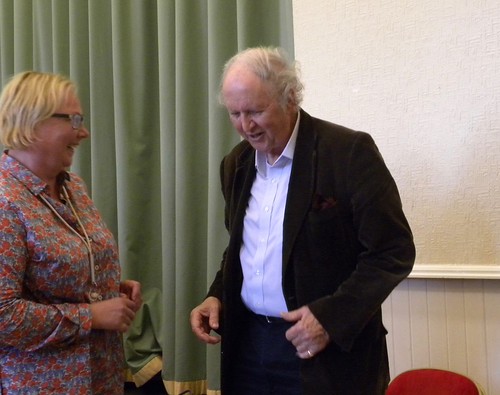 Earlier in the day I had encountered Alexander McCall Smith at the Albert Halls. It was his first time at Bloody Scotland, but he chatted to his fans as though they are always doing this.

And all those people sitting out in the sun, eating sandwiches, fighting the wasps (I made that up), and generally having a good time… 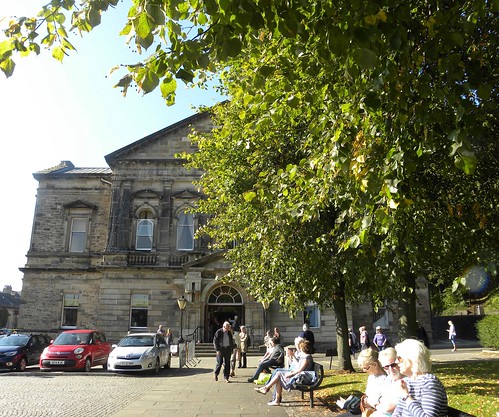 No Time to Cry

No Time to Cry is James Oswald’s new crime series. It’s so good that I raced through a lot of it, and rested a little here and there, because it got so scary/exciting that I needed to let my nerves ping back to neutral again.

James has a female detective this time, but apart from the swearing Constance Fairchild does – mainly to fit in – she’s quite close to Tony McLean in her social background, by which I mean she’s [originally] well connected, except she doesn’t get on with her immediate family. 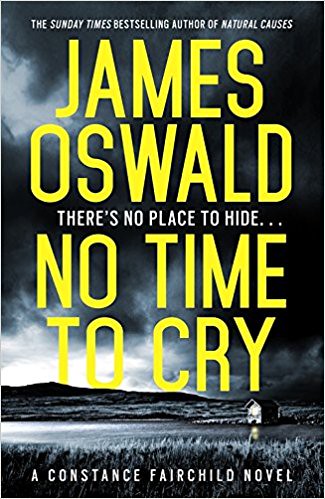 No Time to Cry starts with Con walking in on the murder scene of her boss Pete. Before long she’s accused of killing him and suspended from the London Met.

She obviously needs something to do, so apart from trying to stay alive when different people take turns attempting to murder her, Con starts digging into the disappearance of a childhood friend.

Before long it seems that nothing she does is terribly safe, and I began worrying about the various older females near her, and an unexpected cat, hoping there was to be no more Mrs McCutcheon-ing, with or without cat.

Great crime thriller, complete with a character from the Tony McLean books. I look forward to seeing what will happen next.

If you thought that rubbing shoulders with crime writers at the Coo in Stirling, during the Bloody Scotland weekend in late September, sounds like fun, you can forget it. The event sold out in no time at all.

But there’s other daft stuff you could do, unless you delay so that these other events also sell out. Personally I fear this might happen more than I’d find convenient. You know, I don’t want to commit just yet. But I don’t want to be left without, either. 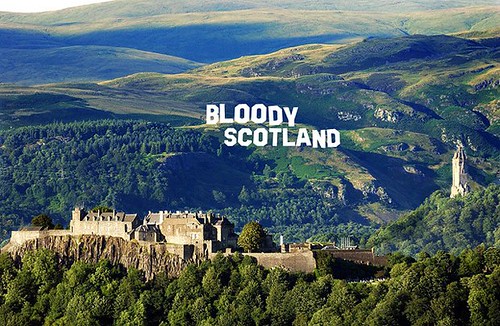 There’s more than one event where crime writers do something else, like sing. Or pretend to be a television quiz show. There is even a musical, written by Sophie Hannah and Annette Armitage, which to begin with I believed to last seven and a half hours, but it’s just two ‘sittings’ so to speak. Or there’s the cast and crew of Agatha Raisin. You can go to the football. I haven’t yet, but there is no saying how long I can hold out.

If you fancy more ‘ordinary’ events where authors talk about their books, look no further. Bloody Scotland has a lot of them. I see James Oswald has a new detective. (I don’t like change!) There’s an event on breaking barriers with three Asian authors and one Icelandic one. Or there are more Icelanders in a separate event, if you prefer.

They have Swedes. Well, they have one real Swede, Christoffer Carlsson, from my neck of woods. He’s nice. Although not so sure about his murders. Then there is a French fake Swede, but who writes about Falkenberg, which I highly approve of. And someone else foreign who at least lives in Sweden.

It’s 2018, so violence against women has to be addressed. Our favourite pathologist is coming back. So is Pitch Perfect, where they let the hopefuls in. The Kiwis are coming, and Chris Brookmyre has got a new name as he writes with his wife.

They also offer some of the biggest names in the business, but you’ll need to read the rest of the programme yourselves. And come and see the torchlit procession on the Friday night! 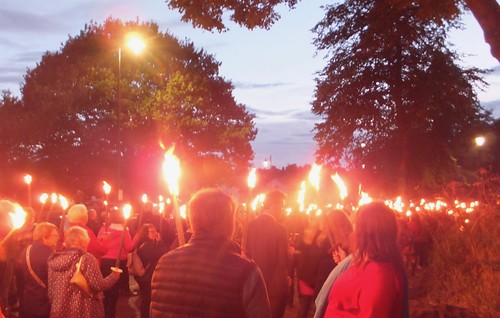 They all seemed to be women. Or perhaps I merely happened to choose Book Week Scotland events that featured women. I picked what interested me, and what was nearby enough to be doable, and at times convenient to me.

Four events, though, and a total of nine women speaking at them. Only the last one, about gender violence, had a subject that determined who was likely to be taking part.

The audiences were slightly different. For Mary Queen of Scots there were three men. The gender violence had one man in the audience for part of it, one man to operate Skype (!) and one man who seemed to be working in the room where we sat. Several men for both Lin Anderson and the autism discussion, while still being in a minority.

Three events were during daytime, but that doesn’t explain the lack of men, when the women were mostly well past 70.

Do they read less, or are they not interested in events? Or do they go to the ones with men talking? (I’d have been happy to see Chris Brookmyre, but he didn’t come this way, or James Oswald, but he was sold out.)

Anyway, whatever the answer to that is, over on Swedish Bookwitch we have women today. My interview with Maria Turtschaninoff is live, and it’s mostly – just about entirely, actually – about women. And it’s in Swedish. Sorry about that. (Translation will follow.)

Starting on Monday, 27th November, is this year’s Book Week Scotland. And there is much you can do.

But don’t delay. There is no point in me suggesting you catch James Oswald in Auchterarder, because he’s already sold out. And because I have now more or less decided what I will and won’t do, I have stopped looking at the ticket booking facility, so won’t know what else might be too late.

Crawford Logan, aka Paul Temple, will do an event in what seems to be an undertaker’s ‘service room.’ But I don’t see why not. After all, he was last seen by the Bookwitch family doing a reading at the Grandmother’s funeral. He knows what to do.

Mairi Hedderwick is appearing all over the place, while still not doing so at a venue or at a time that suits me…

A place and time that is surprisingly good for me is Rachael Lucas talking about Asperger’s at Waterstones on Monday night. And more locally, I have Alex Nye coming to my nearest library (not that I’ve measured), and Alexandra Sokoloff will be talking at Stirling University.

Lin Anderson will be in Alloa, and Badger (the lovely dog) is coming to Cumbernauld.

And I could go on. But I won’t, because if I mention all the people I would like to see but can’t, because they are booked to speak in Shetland or (almost as bad) Orkney, I will get upset. But if you happen to be close to my far flung places, then off you go to a lovely event or two. Julie Bertagna, for instance. Or Debi Gliori.